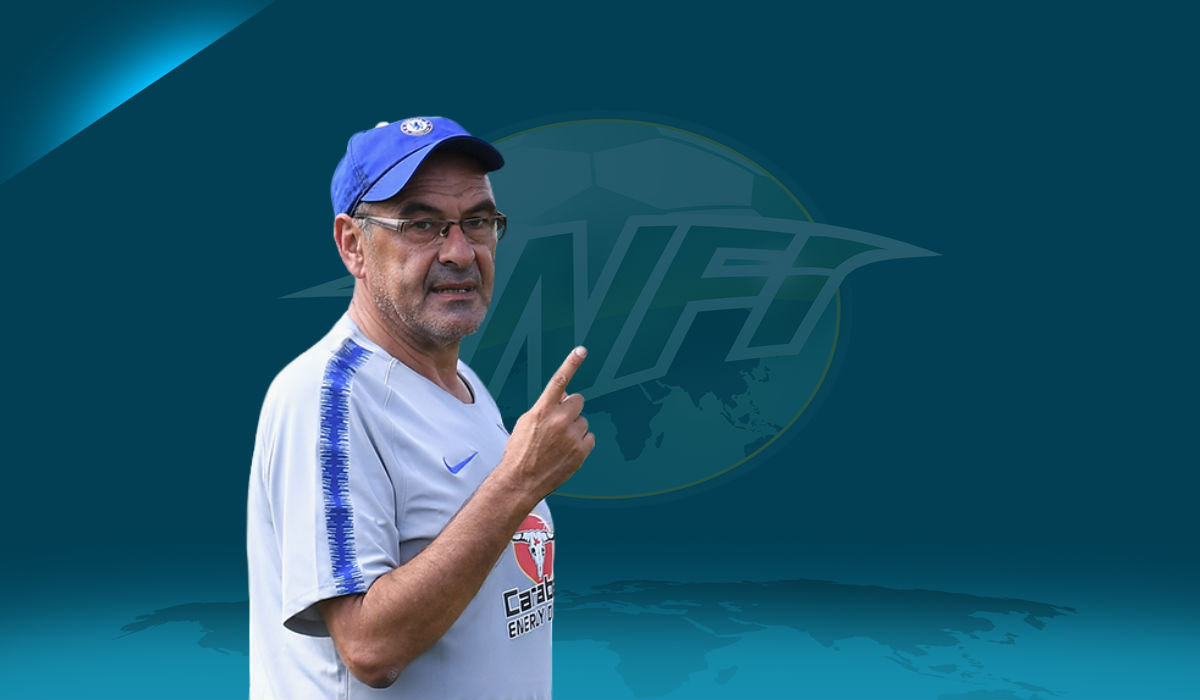 Chelsea hired Maurizio Sarri to implement a long term plan. Surely that’s what they hired him for.

After years of fairly successful stodgy pragmatism, the club wanted a team which radiated style and a manager who would produce a side as recognisable as Pep Guardiola’s Manchester City, Jurgen Klopp’s Liverpool, or Mauricio Pochettino’s Tottenham.

If Chelsea sack Maurizio Sarri for not winning a one-off game against a side widely regarded as the best in Europe, managed by one of the greatest minds to ever roam a technical area, then it will go against their reasons for hiring him. Surely that’s what they hired him for.

He says what he thinks and thinks what he says. As Gabriel Marcotti wrote in the Times, quoting someone who knew him well from his time at Napoli:

“He talks in front of the cameras in exactly the same way as if he was going for a cigarette out back with his mate.”

“You can’t do that unless you win every game.”

Sarri’s excellent start may not have helped him. Look back to most football writers’ pre-season predictions and they will have had Chelsea somewhere between fourth and seventh, lucky to qualify for the Champions League.

But Chelsea began the season well. They hit the ground Sarriballing, topping the table for some time and looking like a top four side, perhaps more.

Even after their 12-match unbeaten league run came to an end they were the first side to defeat Manchester City, keeping a clean sheet and scoring through David Luiz and N’Golo Kante…

Once the inevitable teething problems problems began, surely they knew they were inevitable, a collection of negative narratives emerged around the club as the defeats became more regular.

These narratives are trotted out with such regularity and predictability that they could be turned into a drinking game.

Take a drink when you hear one of the following:

But you can take a shot and down your Peroni when you hear something about:

Kante playing out of position

Throughout his career Kante has almost always played as the more box-to-box player in a double pivot and in his best seasons he was never an out-and-out ‘defensive midfielder’.

FIFA (the game not the organisation) and Football Manager are partly to blame for this false perception of defensive midfielder as a position rather than a role. The DM, as it has become known, is now commonly used to describe the deepest midfielder rather than the role of a defensive minded midfielder in any part of the pitch.

We only have to look back to Sarri’s Napoli to see Allan, a defensive midfielder, playing in the centre of the park rather than in the deepest role.

It’s often the case that when deepest midfielder is a regista or deep lying playmaker, the defensive player, or players, are wider and/or further forward.

Javier Mascherano alongside Xabi Alonso, Claudio Marchisio with Andrea Pirlo, and other players such as Radja Nainggolan, Franck Kessie, Thomas Delaney, Weston McKennie, Arturo Vidal, and Santiago Ascacibar etc. would be current examples of players who can defend well throughout the midfield and not just in deep areas.

Returning to Kante, this is a role which arguably gets the most from him. He is able to track back to win the ball alongside Jorginho, but he’s also able to press high up the pitch where his ball winning skills are an attacking weapon rather than a preventative measure.

A team is at their most vulnerable in transition, and the higher up the pitch a defending side can win the ball back, the more dangerous they are once they get it. So Sarri has put his best ball winner slightly higher up the pitch.

“I like this position,” Kante said in the build-up to the League Cup final.

“I’m with the manager, and I’m enjoying the way I’m playing now. It is a position I used to play when I was in France. I’m enjoying participating more in the offensive positions to change the game.” 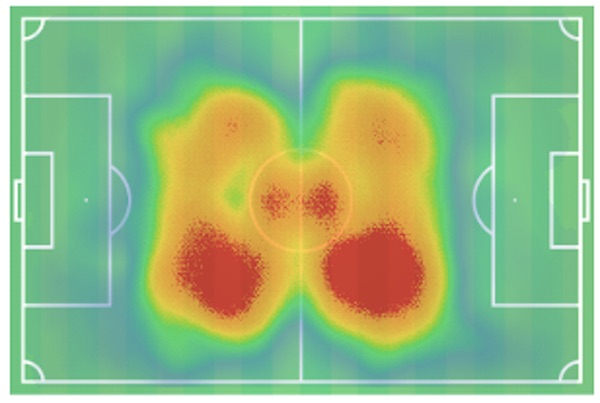 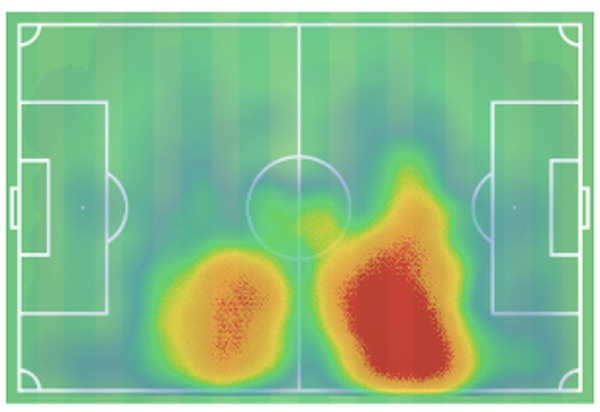 And as this is a midfield three, Kante is playing in the correct position. A kind of segundo volante, to use the South American term which defines this role well — the second pivot, but not quite a double pivot, as shown in his heatmaps above.

Kante is perfect for this role and has shone this season, and is almost up to Allan’s tally from Sarri’s last season in Napoli for goals and assists. But it’s something which has gone under the radar somewhat since the downturn in results and the regular negative narratives which ignore any of Chelsea’s good play.

This has always been his position and the only time it wasn’t, on the odd occasion with France last summer, he may have gone home a World Cup winner but it was as a lone holder where he looked the most ‘out of position’.

The same kind of thinking, flipped on its head, can then be applied to Jorginho. A deep lying midfielder, but not a defensive one.

His job isn’t just to sit, and it isn’t really to defend. He works his way through the centre of the park knitting play as others run off him, providing a wall off which his team-mates can bounce passes as they attack.

One of the many problems for Sarri at the moment is that the theory isn’t being put into practice for 90 minutes. This can often be seen in Jorginho’s frustrated gesticulations on the pitch and those of his manager from the touchline. It’s to be expected as the new ideas bed in, and the players learn the intricacies of the tactical plan.

Even after victories the Italian boss doesn’t get carried away, often pointing out flaws in his side as well as the things they do well, as was the case against Malmo.

He’s the same after defeats, pointing out the positives as well as the negatives, but for some reason the post-match narratives are currently negative, win or lose, and this has now filtered into the stands.

Sarri has his faults but Chelsea signed up for them, too.

He is loved in Napoli and they’d have him back tomorrow, but not so much by Napoli fans from elsewhere who think his stubbornness prevented them from winning the league.

In truth, his stubbornness put Napoli in a position to win the league in the first place, and under his tutelage they enjoyed the three best Serie A seasons in the club’s history. Unfortunately, the modern Juventus juggernaut prevented them from donning a Scudetto.

So Chelsea hired him knowing these quirks. Knowing that they were getting a manager who doesn’t rotate much in the league, substitutes his attacking midfielder for another attacking midfielder around the hour mark, and won’t really play youth players unless they are fully in tune with his tactics. Surely they knew.

This brings us to Hudson-Odoi. A player who impressed in pre-season and has attracted interest from German champions FC Bayern thanks to his introduction to first team football under Sarri…

Should the Italian give Callum Hudson-Odoi more minutes? Yes, but let us not forget that this is a player who had played a total of 80 minutes of senior football for Chelsea prior to the arrival of the new boss.

He has played 704 minutes this season, and while this is not more than any 18 year old, as the club — both Sarri and Gianfranco Zola — have said, it is still a good amount for a player who has only just entered the senior setup.

That said, he should still be getting more league minutes ahead of the waning Willian and inconsistent Pedro.

This, plus the continued selection of Marcos Alonso at left back over Emerson, are genuine and reasonable gripes to have, but a lot of the other negativity towards Sarri this season has bordered on baffling.

He was brought in to instil a new philosophy and a style of play which is almost the opposite to the pragmatism which has been ingrained in the club since the days of Jose Mourinho, and this change doesn’t happen overnight.

It doesn’t even happen in a season. Ask Guardiola, Klopp, Pochettino, or any manager looking to build something long-term.

Chelsea’s league position currently matches many of the pre-season predictions. No higher, no lower. They have made it to the League Cup final, knocking out Liverpool and Tottenham along the way, and have progressed to the last sixteen in the Europa League. But apparently this isn’t enough.

Negative narratives may take some time to filter from the media into the stands, but once in the stands they take very little time to reach those in charge at the club, and it appears they have now made their way ‘upstairs’.

Chelsea are ready to send an SOS to Steve Holland if they sack Maurizio Sarri next week. England assistant manager would be their top target for caretaker post #cfchttps://t.co/h0ipqgYEfs

There are rumours Sarri will be sacked if he fails to defeat Manchester City in the League Cup final, or if his side loses to Tottenham in the next league game. Two sides whose managers have been given time to implement their philosophy and also given support while doing it, against a manager who looks like he’ll be lucky to get eight months and has had no public support from the owners.

Chelsea have recently been hit with a transfer ban, which has led to further speculation around the future of their current manager.

“I feel much more a training ground manager than a general manager,” said Sarri on arriving in London.

“I think I’m one of the few managers who is bored by the transfer market. I’m not interested in it. Our task as managers is growing the players we have.”

For a club facing a transfer ban, surely Sarri’s the ideal man.