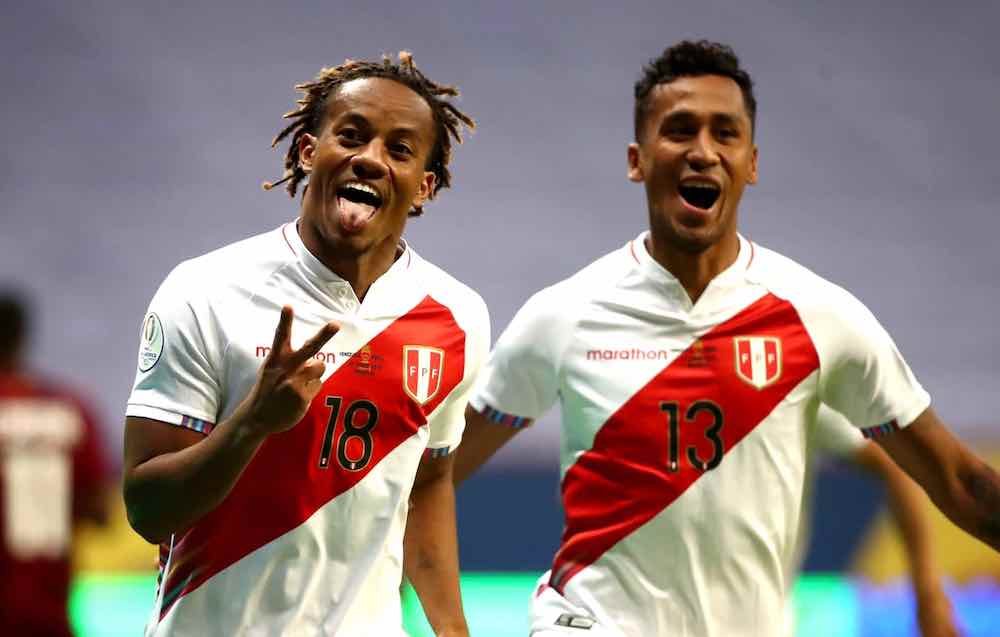 Peru progressed to the knockout rounds of the Copa America thanks to a 1-0 victory over Venezuela with the goal scored by Andre Carillo.

Ricardo Gareca stuck to his instincts and relied upon a regular group of starters, most noticeably his lone striker, Gianluca Lapadula, and wide players Carillo and Christian Cueva.

The two wide men are both currently plying their trades in Saudi Arabia with Carillo being at Al Halil since a move for around £9m from Benfica in 2019 and Cueva off to a strong start with Al Fateh after signing last year.

Questions were asked of these players and their futures in the national team after joining Saudi Arabian sides, but their performances on the pitch have shown them to be almost irreplaceable in the starting lineups.

Lapadula has now added to his three assists by scoring in their match with Ecuador where Peru came from two goals down after a disastrous first-half display.

The 31-year-old has shown excellent commitment levels to his side’s play and is currently keeping out Santiago Ormeño, who many thought would break into the side after a successful season in Liga MX.

Sergio Peña has started to improve in a more advanced role, having been quite poor in previous fixtures in the heart of the midfield. The FC Emmen attacking midfielder is hoping to attract attention for a move this summer after his side were relegated from the Eredivisie.

Though there has been limited rotation, especially in the starting lineup, a number of players will be keen to see more minutes with moves expected to happen for them in club football this summer.

Luis Abram and Wilder Cartegeña both have their contracts expiring this month and Alex Valera has been attracting interest from Bulgarian side Lokomotiv Plovdiv.

Peru have managed to continue their impressive Copa America form. In the last three tournaments the only side to beat them are Brazil.

Once again, Brazil got the better of Gareca’s side in the group stages with a 4-0 win, but he has backed his players and continued in a similar system throughout.

As Peru enter the knock out rounds, one thing will be high on the list for attention, and that is composure in front of goal.

They currently have only had more shots on goal than Bolivia (20) and Venezuela (22) with 31 and averaging around 40% of these on target.

Peru face an in-form Paraguay in the quarter-finals and the winner will play either Brazil or Chile in the semis.