Fran Alonso On Managing Celtic And Learning From Pochettino & Koeman 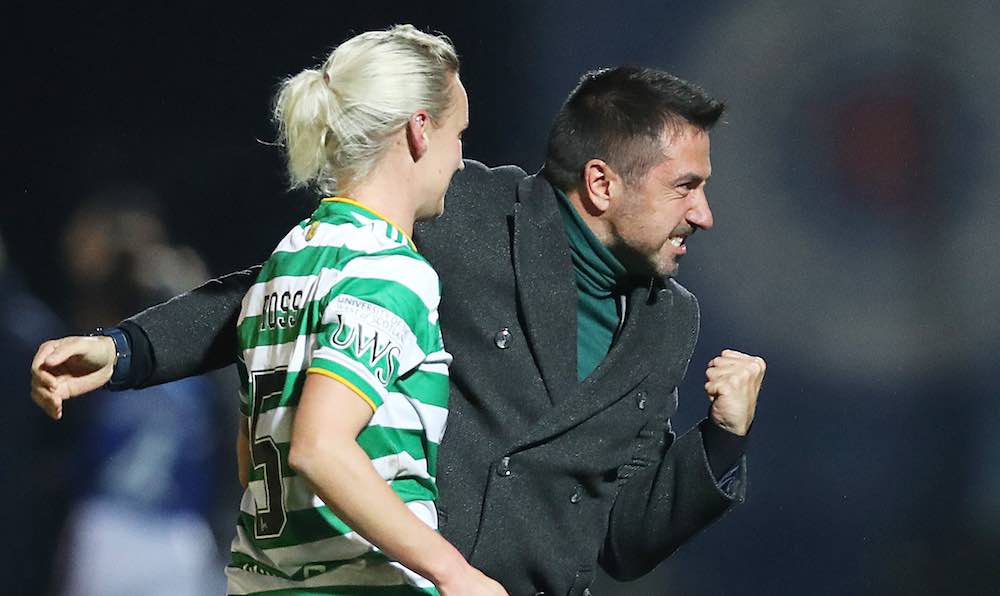 An interview with Fran Alonso, by Callum McFadden for WFi.

You are currently the manager of Celtic FC Women and have made a big impression on the Celtic fans. How much are you enjoying your time at the club so far?

“I arrived at Celtic in 2019 as the club was transitioning into becoming professional because they were part time before I arrived.

“Celtic is such a historic club that attracts fans all over the world, so I wanted to be a part of the club as soon as I knew the opportunity was available.

“I had worked with former Celtic players such as Artur Boruc, Virgil Van Dijk, Fraser Forster, and Victor Wanyama in my previous coaching role at Southampton and they always spoke about how so special they club was.

“I have certainly found that out for myself too because the fans have treated me very well.

“The league in Scotland has also grown so much in recent years with coverage of games being shown live on BBC Scotland, in addition to their being a weekly highlights show now too.”

How would you describe your coaching philosophy?

“Good question. I am a coach who wants his team to play free-flowing, attacking football. I demand that my players are brave on the ball and take risks going forward because football is all about entertaining the fans as well as winning games.

“At my previous club, my role was to avoid relegation due to our limited resources, so it was tough to play the way that I wanted to because we were not able to recruit enough quality to be able to play that way successfully.

“Celtic are more aligned with my philosophy and we have the players to be able to play the way that I want to.

“I am a very passionate man, and the fans of Celtic are equally as passionate so it is a good fit.

“I have a strong connection with them, and the club have backed me to implement my style.”

How do you reflect on your time as a manager at the club so far?

“I reflect on things positively because we have made history in each of the seasons that I have been in charge.

“In my first season, we qualified for the Champions League for the first time in our history.

“Then, in the second season, we won our first-ever domestic double by winning the Scottish Cup and the Scottish League Cup.

“The journey so far has been incredible, and we have started this season in good form so I hope that we can make history again this season and challenge for the league title.

“The success that we have had so far has been a collective effort and I am thankful to the club for their backing and to my players who give me everything that they’ve got.

“We have also had the opportunity to play at Celtic Park during my time in charge and that has been wonderful for the players and also for me and my staff.

“The first game that we played at Celtic Park was during the COVID-19 pandemic against Rangers. That was a good experience for us all particularly as we won the game, however, it was a shame that we could not have fans in the stadium because that would have made it even more special.

“However, our second game at Celtic Park was against Hibs when Covid restrictions eased, and we had thousands of fans in attendance.

“That was a wonderful day for all of us associated with Celtic FC Women because the fans had flags, banners and drums. They created a wonderful atmosphere and backed the team in such a strong way.

“It drove the team on, and we defeated Hibernian 4-0 which was the biggest result that we had against a good Hibs side during that season.

“That is a day that I will always remember.”

You worked under Mauricio Pochettino and Ronald Koeman at Southampton as well as working with Ronald at Everton. What did you learn from your time working with two high-profile managers like that?

“I learned so much from both of them.

“I started my coaching journey in grassroots football so to work my way up to working in the Premier League was a wonderful learning curve for me.

“I thought that I was a good coach when I went in at Southampton, but I very quickly realised that I had so much more to learn when I watched Mauricio at close quarters.

“I was fortunate that I was brought in by Mauricio partly because I was able to communicate in Spanish and in English, so I could help him communicate better with the players in the early stages of his reign while he learned English.

“That led to me being asked to work with players on a one-to-one level as well as a team level to get Mauricio’s message across. It was an incredible opportunity for me to work with top players.

“For example, when Mauricio started at Southampton, we had two international players in Maya Yoshida of Japan and Gaston Ramirez of Uruguay.

“Then within six months under Mauricio, more of our players went on to represent their country like Jay Rodriguez, Nathaniel Clyne, Rickie Lambert and Adam Lallana of England, Dejan Lovren of Croatia, and Morgan Schneiderlin of France.

“These successes were down to his hard work and coaching.

“Then, Mauricio moved on to Tottenham and Ronald came in.

“He was an incredibly successful player and also had a good pedigree as a manager.

“He was big on positional play, and I asked as many questions as I could of Ronald in order to learn all that I could from him. He was also a ruthless manager who was upfront and honest with players.

“Of course, I learned a lot more besides but those were the two main things that resonated with me.”

I caught up with Celtic manager Fran Alonso earlier today ahead of this weekends game against Glasgow Women.

Regarding your role at Celtic, do you have regular opportunities to speak to the men’s team manager Ange Postecoglou?

“Yes, I have met Ange several times and I also watch a couple of the men’s first team training sessions.

“We have slightly different philosophies as coaches but both teams are aggressive in and out of possession and always look to play on the front foot, so we have out similarities too.

“It is interesting to speak to Ange and watch him coach because he is a fascinating character who has had great success since coming to Celtic.

“We both won doubles with our respective teams last season which was a nice achievement for the club.

“I am also close to Darren O’Dea who manages the Celtic B team. I completed my Pro Licence course with him, and we speak regularly about football and our respective teams.”

Finally, Fran, what do you hope to achieve at Celtic going forward?

“Our standards are very high.

“I want the team to continually strive to be better. Even when we win, I challenge the players to improve.

“Complacency is not an option. I demand even more from my players after a win because their confidence is high, and they are in a good to take constructive criticism without it affecting their confidence.

“Our statistics in terms of chance conversion and possession have improved this year compared to previous years which sums up what I want to see.

“It is early days in the season after only a handful of games but so far, so good.

“Success this season would be to continue to play the attractive football that we have done so since I took over as manager, winning the majority of our matches, and hopefully bringing at least one trophy back to Celtic Park this season.

“Without doubt, we want to win the league title, but we are aware of the challenge of any title race. It is a marathon and not a sprint.

“We want to be in that race for as long as we can and compete each and every week.”