The Rise and Fall of Miguel ‘Piojo’ Herrera 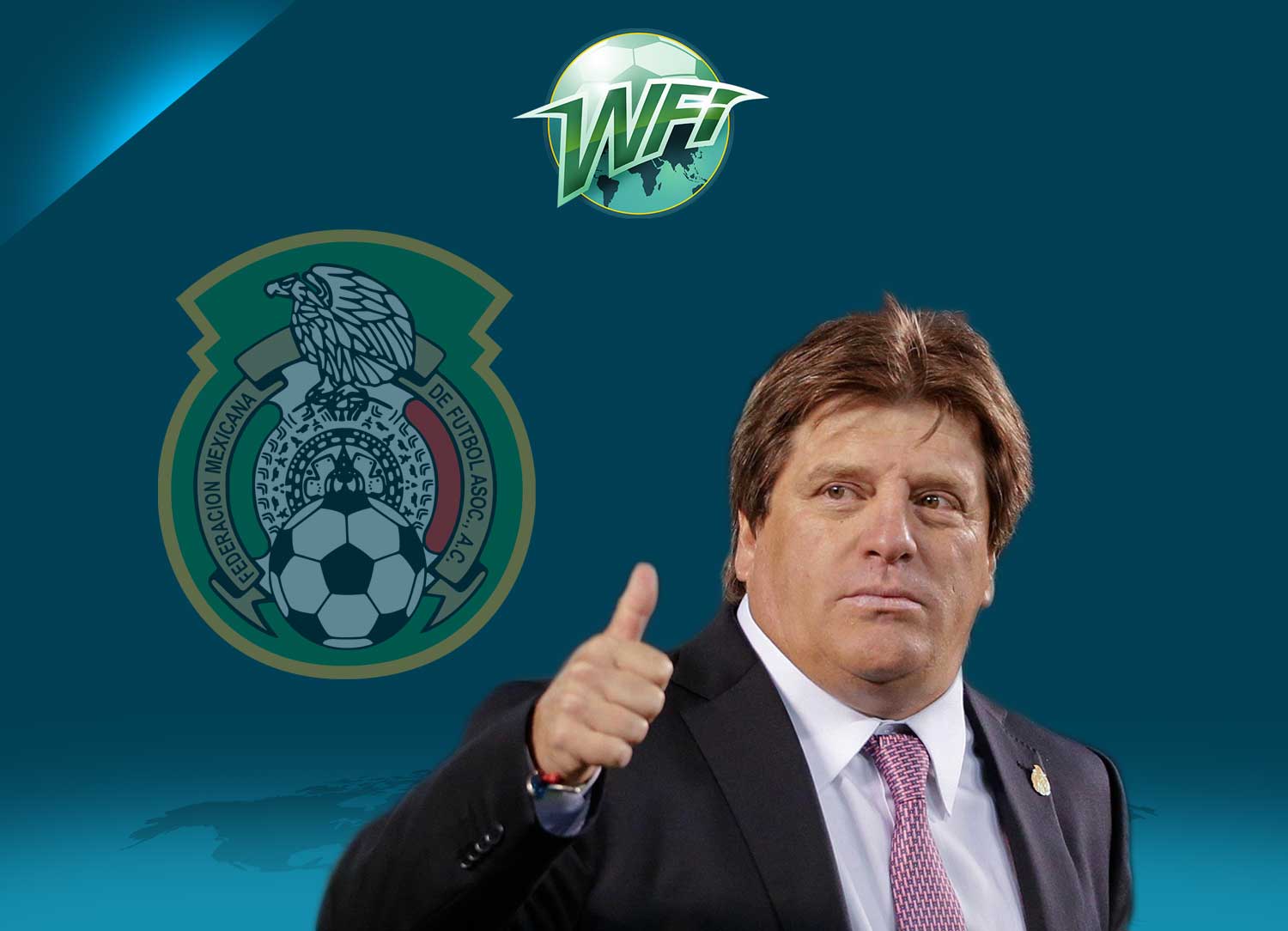 Since the 2010 World Cup in South Africa, the Mexican national team has seen its fair share of change in regards to its manager. In fact, six different men have managed El Tricolor, including four men who lasted three or fewer games respectively.

In 2013, with all the turmoil around the team, the Mexican federation (FMF) would look to Miguel “Piojo” Herrera, to bring stability and passion back into la selección as they faced a two-game play-off with New Zealand to qualify for the World Cup in Brazil.

The proud, passionate and enthusiastic manager proved to be exactly what Mexico needed to cement their place in the most prestigious tournament in world football, defeating New Zealand 9-3 in two legs. By turning the historically bad run of form around, El Piojo would become more than a manager, he would become a bit of a savior to a nation starving for its first major trophy since the 2011 Gold Cup.

Herrera brought an upbeat attitude which rubbed off on a group of players under a tremendous amount of pressure. It was a much needed boost of confidence for a team that was on the cusp of missing out on its first World Cup since World War II. Once Mexico eased passed New Zealand, they would begin the 2014 campaign towards Brazil with a new found swagger and sense of optimism.

Herrera’s passion is what endeared him to the football-mad fans in Mexico. El Piojo was ultimately just one of them, as he shared their passion and their plight for the national team.

It was more than just a change of attitude, as Herrera also brought a change in tactics. Mexico would employ the 5-3-2 formation — a set-up with which he found great success while managing Liga MX giant, Club America. The newly hired manager was quite outspoken as to what would constitute a successful tournament for El Tri: making it past the round of 16 and into a quarter-final. It wouldn’t be easy, as Mexico hadn’t been to a quarter-final since 1986.

Mexico was a defensively stout side with just enough in attack to give them a fighter’s chance in the tournament. They started out in impressive fashion winning their opening fixture 1-0 over Cameroon. Giovani dos Santos had two first half goals disallowed for offside, but replays showed that both goals should have stood.

In Mexico’s second match they would be facing one of the favourites and hosts, Brazil. All of Mexico was on edge as an incredible performance from goalkeeper, Guillermo Ochoa, proved to be enough to blank Brazil and give Mexico a vital share of the points in the 0-0 draw.

In the third group stage match, Mexico would come up against a tough Croatia side with a ton to play for. Croatia went into the match needing a victory to guarantee qualification into the round of 16, while Mexico needed no more than a draw to move on. The game was scoreless after seventy minutes but that was all about to change as the final 20 minutes of the match would prove to be filled with excitement. Hector Herrera would find Rafa Marquez on the back post with a corner and Marquez would bury it home giving the Mexicans the lead. A lead they would not let go of as they went on to score two more goals and win the match 3-1 — El Tri would qualify a runners-up on goal difference to Brazil. The stage was set and Mexico would face the Netherlands in their quest to reach their first quarter-final in almost two decades.

The game would start off Mexico’s way as they controlled the game and in the 48th minute they would find the much deserved breakthrough goal. After this beautiful strike by Giovani dos Santos, the men in green would find themselves defending for their lives to reach their goal of a quarter-final birth.

It was not to be, as a late goal from Wesley Sneijder would tie it up at one apiece. A few minutes later Arjen Robben would go down in the box with minimal contact and was awarded a penalty. Huntelaar would step up and bury the penalty and along with it Mexico’s World Cup journey.

Though the team had not reached its goal, it seemed that the Robben controversy and the uphill climb to even qualify for the tournament was enough to keep Miguel Herrera in a positive light within both the FMF and supporters alike.

After the World Cup, Herrera was able to gain popularity with the Mexican supporters bringing highly touted Carlos Vela back into the fold for la selección — an impressive feat as Carlos was unwilling to be part of Mexico’s campaign leading up to and including the World Cup. In his first action back, Vela helped propel Mexico to a seemingly redemptive win over the Dutch in November 2014.

Everything was about to come to a halt as the following matches would prove to be quite strenuous for El Tri and Herrera’s rigid 5-3-2 system. The stubbornness to change tactically would prove even more harmful to him and Mexico in the near future.

2015 was the beginning of the end for El Piojo. Mexico would be in two international tournaments during the summer — the Copa America and the Gold Cup. The latter was the priority, as victory would ensure a play-off against the USA for a trip to the highly lucrative Confederations Cup in 2017. The need to perform in the Gold Cup would force Herrera to use a much less experienced side during the Copa America in Chile.

Expectations of the weakened side were still to get out of a relatively easy group, with Bolivia and Ecuador battling Mexico for a chance to advance alongside group favourites and hosts Chile. Those goals were not met as El Tri were unable to muster a win in the tournament — reminiscent of 2011 when Mexico failed to record a single point. Mexico were quickly bounced from Copa America, and would find themselves in the midst of a seven-game win-less streak.

Pressure would mount on El Piojo and the writing was on the wall, Herrera would no longer be head of la selección if the squad didn’t lift the Gold Cup in July.

The Gold Cup would get off to a sputtering start, Chicharito Hernandez and Hector Moreno suffered injuries that would force the duo to miss the entire tournament. The pressure would continue to mount as El Tri failed to perform consistently throughout the tournament.

The Mexicans would get through the quarter-final and semi-final rounds in controversial fashion. In both matches, Mexico were the beneficiaries of blatantly poor late penalty calls — both cases showed little to no contact with the Mexican player in the box. Nevertheless, Herrera’s team would advance to the final and the goal of achieving gold was still within their grasp.

Mexico would get off to a great start stifling Jamaica and eventually going on to win 3-1 and hoist the coveted CONCACAF championship. Even with poor performances and controversy, it seemed Herrera had done enough to keep his post. However, that would all change within hours of Mexico claiming its first major international trophy since 2011, when Herrera got into an altercation with a journalist in a Philadelphia airport.

Instead of keeping his cool and celebrating his victory, he reacted emotionally to comments made by a reporter with whom there was already tension — incredibly unprofessional to say the least. The embarrassment was more than the FMF could bear, and the following day they dismissed Miguel Herrera as manager of la selección.

Would the decision have been different if Herrera had produced more convincing results? More than likely, yes. The Mexican federation, however, seemed to have grown tired of his stubbornness and the controversies brought on by his antics.

It wasn’t as though he overachieved as manager, nor had he revolutionized the way Mexico played. Although he brought an excitement and enthusiasm that had been missing at the time of his hiring, it seems the time had come for El Piojo to move on as manager of El Tri.

A suitable end for a man whose tenure was anything but consistent. The roller-coaster ride was over and though he will undoubtedly receive offers from a myriad of clubs, none will be as prestigious or coveted a position as the one he just lost.