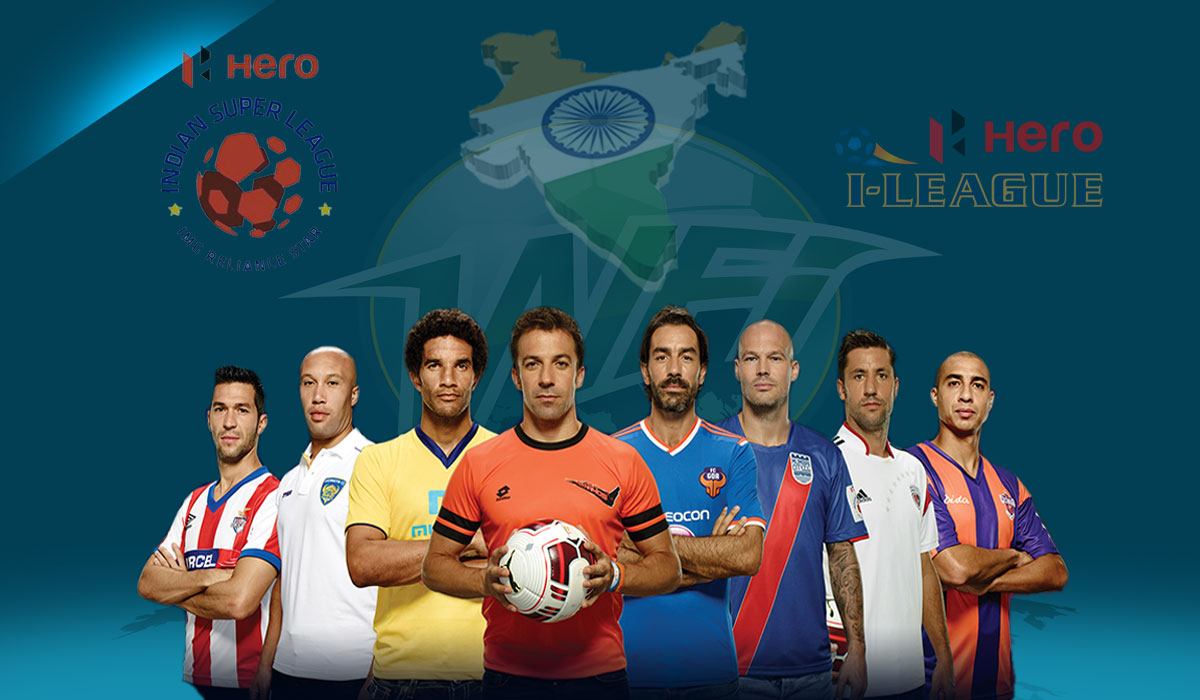 A goal by Mohammed Rafique, in the 95th minute no less, sent the majority of the 37,000 odd fans at the DY Patil Stadium into delirium, especially those decked in Red & White stripes.

Across the globe the jersey has been identified as the colours of Atletico Madrid, but on his day in in December 2014 a new identity was created as Atletico De Kolkata were crowned champions of the first Indian Super League.

Considering the innumerable false dawns associated with Indian football, the above description could easily be considered as the gripping climax of a book or a movie. But no, this was real. Indian Super League had got off to a grand start and the nail biting climax is the best the organizers IMG & Reliance could have wished for.

The Indian Super League has had a lot going for it since its conception. Eight city based franchise teams with a smattering of celebrities from Indian sport and movies, interacting with world famous footballers in their heydays, was a combination made in heaven.

The interest in Football in the country was never in doubt. The Kolkata derby between East Bengal and Mohun Bagan has been known to be watched by more than 100,000 people – 131,000 to be precise, at Salt Lake Stadium in the early 90’s.

The consumption and audience for Football was also never in doubt.According to officials from the All India Football Federation (AIFF), more people watch the English Premier League in India, than in the UK.

There were many positives which came about from the Indian Super League. Let’s look at some of the highlights:

Attendances at the Stadium

If the attendance figures at the Stadiums are anything to go by, one can conclude that the ISL is a grand success. An average attendance of above 24,000 meant that the ISL was the 4th biggest league in terms of attendances last year, after the EPL, Bundesliga, and La Liga.

The opening game at the famous Salt Lake Stadium had a fanatical crowd of 65,000 people cheering on the home team Atletico De Kolkata. That game was watched by 75 million people on TV. Big numbers to live up to.

This was mooted as one of the prime reasons behind the conceptualization of the ISL. With India being awarded the rights to host the 2017 FIFA U-17 World Cup, it was imperative that the young players under the age of 18 got to interact and learn from the best in the game.

The stars during the first season of ISL were a great collection of players, Alessandro Del Piero, Joan CapDevila, Marco Materazzi, Nicholas Anelka, Freddie Ljunberg to name a few. If one cannot learn from such greats of the game, then the 2017 U-17 World Cup will not be something to look forward to.

Professionalism Across the Board

It was heartening to see that a football tournament was being organized and run in a manner that it should be. It might sound silly, but in India we have often seen big events go awry due to improper and sometimes thoughtless execution.

It was heart-warming to note that Chennaiyin FC, a team which came into ISL quite late were able to get things organized and put out a team to compete.

Off the field it was also encouraging to see spotless dressing rooms for players, and decent infrastructure for fans to enjoy the game. It was also heartening to note the availability of medical facilities close by, as in the past Indian football has encountered tragic deaths on the field due to lack of emergency medical services on standby.

The preparation for the upcoming second season has also seen teams being more organized, and embarking on pre-season tours abroad.

Atletico De Kolkata are again returning to Madrid for their pre-season, and that preparation greatly benefited them in their title winning run last season.

Chennaiyin FC, who did not have a pre-season last year due to their late entry have organized a month long pre-season tour to Italy, with a base in Perugia. FC Goa have identified Dubai as their base for pre-season, and will play some friendlies with some of the teams in that region.

Most of the ISL clubs have links or agreements with some big clubs across Europe, which enables them to use their facilities, or even some of their youth players for their ISL Teams. A few of those tie ups are as listed below:

As well as than players and facilities, the involvement of foreign teams means ISL clubs can benefit by interacting with physios, coaches, trainers from such big European powerhouses

Which football fan does not like a Marquee signing? The ISL clubs went out of their way to ensure they could bring in the best possible big names for the inaugural season.

Atletico De Kolkata, as in other aspects, were the early movers, signing up Luis Garcia for the inaugural season. This was followed by other teams signing up players like Alessandro Del Piero , David Trezeguet , Elano Blumer , Nicholas Anelka , and Michael Chopra to name a few.

Though many of these great names were a pale shadow of themselves on the field, they no doubt helped in bringing the crowds to the stadium. Players like Robert Pires were welcomed by fans at airport and escorted to the team bus with great grandeur. And these things were not one-off affairs. Irrespective of the stadium or city they went to, the welcome was the same.

Already this year we have seen things changing. Many of teams have brought in marquee players who are in shape and can easily start games without much of training. FC Goa have signed Lucio, the towering centre back from Brazil, as their marquee player. Simao has come in as the marquee player for NorthEast United FC, while Delhi Dynamos have hired Roberto Carlos as their player manager.

One of the prominent reasons why Cricket’s Indian Premier League became a great success, and has continued its run over many years, is the ability to unearth new talents from across the country.

To see the stars perform is a joy in itself, but to see unknown players take to field and shine is a totally different level of happiness we are talking about. For the growth of India as a footballing nation, it is imperative that there is a structured, well executed grass roots development policy.

As part of the first season, the ISL inaugurated their grass roots development programme for kids below the age of 15. Some of the clubs also held grass roots development trial programmes during the off season to identify any future talents. It is going to take a few years before any of the chosen talents come to the fore, but as the old saying goes; patience is bitter, but its fruit is sweet.

However, not all is hunky-dory when it comes to ISL, and there are a few issues which still need ironing out going forward.  I have tried to look at a couple of them in this piece:

Potential Conflict with The I-League?

There are two levels of potential conflict when it comes to the I-League. One of these is the with scheduling.  The support for the I-League has been growing steadily over the recent years with clubs like Mohun Bagan, East Bengal and Bengaluru FC boasting full stadiums every week. For now the scheduling has been taken care not to conflict with each, but this leads to the more pressing second conflict; that of player ownership.

Since the ISL is a short duration tournament, the contracts are also on a short term basis. This means that the players have actually got to be taken on loan by the ISL clubs for the duration of the competition. This task is easier said than done. The parent clubs have their constraints in letting out their star players on loan with the risk of them getting a long term injury.

Also, with multiple leagues come the usual problems of excessive travel leading to fatigue and injuries. The scheduling of the tournament from October to December also means that it clashes with leagues Europe, making it more difficult to convince teams in Europe to let players out on loan for just the three months.

As explained in the earlier part of the article, the viewer base was extra-ordinary for most parts of the inaugural season of the ISL. The digital media presence was also noteworthy, with 16-million online video views on the ISL website.

The semifinal between Kerala Blasters and Chennaiyin FC alone recorded 1.1 million hits – the type of number that’s unheard of in Indian sports. So it is quite clear that the base is there, but the key is to sustain it.

Many can recall the fanfare with which the F1 Indian Grand Prix was launched, and it was deemed a great success in the initial year. But the response in the second year was lukewarm to say the least, and that is something the organizing committee need to guard against.

Lots of clubs in the off-season have looked at growing their fan bases by organizing club events and talent trial outs. The support of the audience, and more crucially their ability to identify themselves with the franchise, will go a long way in sustaining the interest.

It must also be said that the ISL can do far better in terms of match day commentary. The level of commentary in the opening season was partly humorous, and partly exasperating; neither of which was the initial expectation.

It is imperative to understand that The ISL is just a three month tournament, and three months isn’t enough time to cure all the ills of Indian Football (30 years hasn’t been enough). Realistically speaking, the ISL must be treated as a jump-starter to get the initial buzz going.

Indian football has experienced false dawns before, with the current I-League being launched in 2007 as a snappier and professional version of the now defunct National Football League. But the I-League story is yet to kick-on in full glory, with very few of the full time clubs even filling 75% of their stadium capacities.

There is no doubt that all the ingredients are available to make ISL a sustained success story. Whether that story translates to any meaningful success for the Indian National Team is what many keen eyed football enthusiasts are waiting to see. For the sake of Indian Football, I hope that’s the new reality.