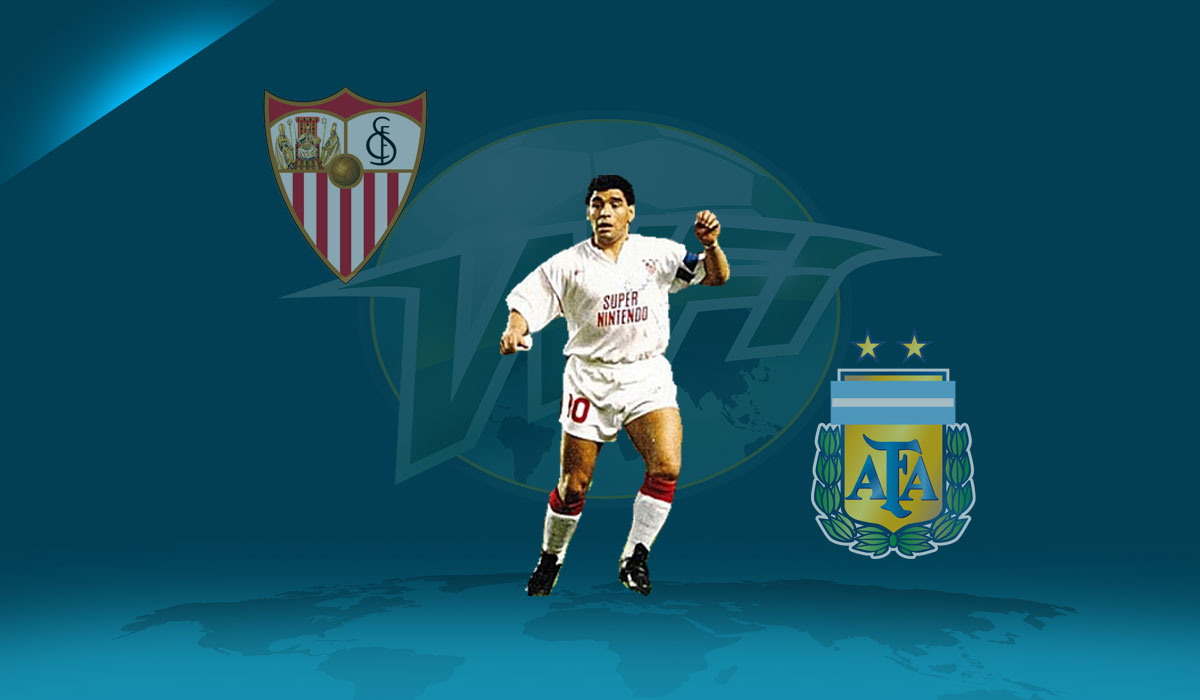 Just a few years removed from the World Cup Final at Italia ’90, Diego Armando Maradona would find himself in a particularly grim situation at Napoli.

1991 would see the name of the infinitely talented Maradona in quite a few unflattering headlines.

There were drug and sex tabloids and an embarrassing arrest in his homeland of Argentina on drug possession charges.  But the toughest pill to swallow would be a 15-month ban placed on Diego by FIFA after testing positive for cocaine use.

The summer of 1992 was fast approaching and the Argentine had overstayed his welcome in Naples. There were reports suggesting the famed number ten had connections with one of the oldest and largest criminal organizations in Italy, the Camorra.

Apart from the sensational news off the pitch, Diego was also doing his best to alienate both club president, Corrado Ferlaino and newly appointed manager, Claudio Ranieri.

With three years remaining on his deal with Napoli, the explosive Maradona would have a tough time finding a club willing to take a gamble on him. The only concrete interest for a player on the wrong side of thirty, who hadn’t played for 15 months, would come from his beloved Boca Juniors, Marseille and La Liga side Sevilla.

Ultimately, Boca would not have the financial capabilities to pry Diego back to his native Argentina and they would fall out of the race for the player many felt was a potential liability at this stage in his career.

The Marseille scenario was an intriguing one to him.  It was a chance to continue to play in Europe and in the pinnacle competition in club football, the Champions League.

However, the prospect of learning a new language and adapting to a new culture at this stage in his career would deter him from joining the French giants.

All that remained were Andalusian outfit, Sevilla.  Though not a force in Europe at the time, Sevilla had lofty ambitions and had a young crop of exciting talent, led by fellow Argentine, Diego Simeone.

But the most significant attraction for Maradona would be manager Carlos Bilardo, the man who six years earlier led Diego and Argentina to World Cup glory at Mexico ‘86.

Even with all the positive selling points presented by the La Liga side there was still hesitancy in signing for Los Rojiblancos.

His prior stint in Spain’s top flight with Barcelona a decade prior had left a bitter taste.  Nevertheless, the man once renowned as the ‘best player in the world’ would decide the next destination in his career would be in Seville.

But in typical Diego fashion, nothing came easy and the two sides would find it difficult to strike an accord for the Argentine playmaker. With Napoli demanding Maradona turn up to pre-season training and the Spaniards seemingly content to be patient in negotiation, the number 10 would grow increasingly frustrated with the situation.

Eventually, in a surprising plot twist, FIFA would intervene and mediate the negotiations at their headquarters in Zurich.  It was in this meeting involving FIFA, representatives from both clubs and Maradona’s legal team that progress was made in negotiations.

Maradona would agree to return to Napoli under an utterly ridiculous list of demands. It’s rumoured that these included a massive increase in wages, and use of a helicopter to commute to training.

These audacious demands were exactly the out Ferlaino needed to save face with Napoli supporters, while still being able to move the controversial playmaker. It was never possible for the Italian club to meet the demands and Ferlaino could lay the blame on Maradona for failing to compromise and forcing his way to Spain.

Even then a deal wasn’t straight forward, and the two sides would still clash in negotiating a fee for the number 10.

Eventually, the Spanish side would pay a sizable £4.68m for the services of a player far from his peak.  A player who was no longer the divine talent who navigated through defences with ease, instead they were taking a risk on a player who hadn’t kicked a ball in almost a year-and-a-half, was 31, overweight and had an addiction to cocaine—making the agreed upon fee that much more of a risk.

In his first two appearances for his new club Diego would record an assist against Athletic Bilbao and the winner from the penalty spot against Real Zaragoza.

With the promising start on the pitch, as well as an increase in attendance and over £2m made in merchandise sales since Diego’s arrival, it looked as though the gamble would potentially pay off for the Andalusian side.

Although he was not in the best physical shape and lacked real stamina, he would occasionally produce glimpses brilliance that made him the darling of the ’86 World Cup.

Operating in his typical number 10 role, Diego’s form continued.  He would score a splendid volley against Sporting Gijon, a beautiful free kick versus Celta Vigo, and heading into the  Christmas break,would coordinate a massive victory against Real Madrid.

But as the season passed, the performances would sputter and the moments of brilliance would become less frequent.  Due to his inability to keep off the weight he had shed prior to the season and a laundry list of injuries throughout his career, Diego was wearing down as the games went on.

Not only was he wearing down on the pitch, but he was also in the midst of a continual battle with the club’s hierarchy over his wishes to return to his native Argentina at his convenience, and with little to no notice. A stipulation Napoli were willing to acquiesce given Maradona’s standing with the club.

Diego, however, didn’t carry the same pull with the Spanish side, nor did the Spaniards feel the 31-year-old, chubby, shell of his former self warranted such special treatment.  Not something that Maradona was accustomed to, it was a frequent battle between the player and Sevilla president Luis Cuevas.

It would only get worse as Diego would blatantly prioritize country over club.  Never more apparent than in early 1993, when Maradona was called up for two friendlies against Denmark and fierce rivals Brazil.

Sevilla’s top brass gave the number 10 permission to play in one of the two—suggesting he miss the game against Denmark in order to play for his club days prior.

Again, the World Cup hero would rebel against his club’s wishes and would participate in all three matches — flying from Argentina to Spain and back to Argentina.  To make matters worse, Diego would give a lackluster display in a loss against Logroñés, clearly saving himself for Argentina’s match against Denmark— an act that left supporters in Andalusia in utter disgust.

The relationship between player and club would only become more fragile as the number 10 couldn’t keep his name out of the headlines for negative reasons.  There were reports consisting of brothels, a wrecked Porsche and even trouble in nightclubs throughout his time in Seville.

The final straw came in the next to last match of the season against Burgos at the Ramón Sánchez Pizjuán Stadium.  Struggling with a knee injury, Maradona asked to come off at halftime, instead of succumbing to the players wishes, the manager asked Diego to take an injection for the pain and carry on.

To make matters worse, Bilardo would sub him off only 10 minutes into the second half infuriating Diego.  He would share expletives with his manager as he stormed off the pitch.  The angst would continue into the dressing room as the hot-headed Argentine would destroy everything in his path before disappearing into the night.

A few days would pass and Bilardo would more-or-less demand an apology.  Instead the two would come to blows and Diego would later state, “we kicked the shit out of each other.”

Maradona would never play for the Andalusian club again, and his unforgettable, yet regrettable season in Seville would abruptly end.

Like an ugly marriage doomed from the start, this relationship would end in the only place it could, in ugly divorce.

Not the way the controversial playmaker would have liked to have ended the European leg of his career, Maradona left on and embarrassing note during his oft forgotten time in Seville.

Something that has become a bit of a trend for the iconic Argentine play-maker.

Video above is a compilation of all of Maradona’s goals with Sevilla.