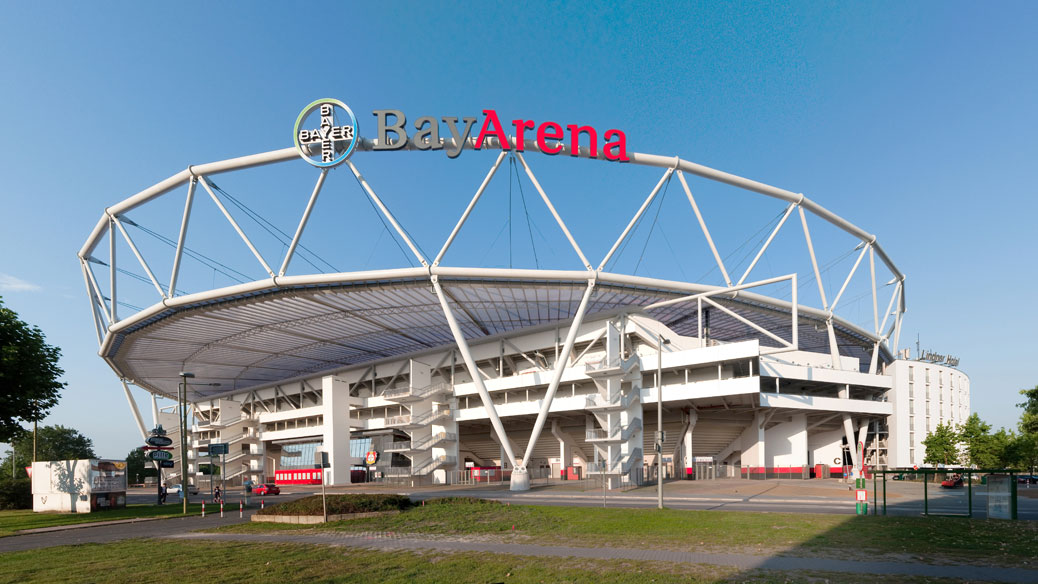 by Charlie Wills at the BayArena.

A controversial 6th minute red card for former Hoffenheim favourite Kevin Volland led to a demolishing of Leverkusen who, with a man less, simply failed to cope with their opposition.

Hoffenheim executed their extra man advantage exquisitely and went on to put three goals past their wearisome hosts.

Kevin Volland would have wanted to prove to his former employers that he was worthy of leaving them behind for a so-called ‘bigger club’.

Yet his sending off after six minutes, for albeit a debatable last man foul, not only ruined his day, but his teams’ too.

Up until that game changing moment, the home side had looked assured in possession and dangerous going forward. In fact the opening five minutes was end to end stuff, with Bayer certainly looking like there were a couple of goals in them.

But it was their attacking start that led to Volland’s dismissal. A corner for the home team that was followed by a quick Hoffenheim counter attack, during which Volland made a last ditch attempt to poach the ball from Kerem Demirbay, who was through on goal.

After a lot of bickering and disputing among the Leverkusen players and referee, the red card finally made its unwelcome ascent from Bastian Dankert’s pocket, and that was the end of Volland’s game.

The subsequent free, kick taken by the same player who had won it, travelled through a gap in the wall, before bouncing onto the outside of Bernd Leno’s left-hand side post.

It didn’t take much longer for the guests to exploit their one man advantage.

Fifteen minutes in, and Demirbay was in the action again, and found himself with room on the left side of the penalty area.

He dummied a shot before bringing the ball onto his right foot and unleashing a classy finish into the right top corner.

Leverkusen’s quick and dangerous tempo that they had illustrated in those opening five minutes had disintegrated, and they became slow and unable to cause their opposition’s defence any problems.

Julian Brandt came the closest for the home side, a clever one-two with Charles Aránguiz put him in a decent position on the left side of the penalty area, but his right footed shot fired wide.

The half time whistle was greeted by boisterous boos from the Leverkusen fans directed at the match official who grew more and more unpopular after the dismissal.

Fans unhappy with a major refereeing decision? Surely not!

The hosts’ second half didn’t improve, in fact it became worse during the next forty-five minutes.

Just four minutes into the second half and Hoffenheim had doubled their advantage.

Sandro Wagner, who impressed us all in the Bundesliga with his meritorious eye for goal at Darmstadt last season, struck a powerful left footed finish past Leno at his near post, assisted by Andrej Kramarić from the left wing.

Goals were not to be the only drama in the second half.

Leverkusen head coach, Roger Schmidt was sent to the stands after an altercation with Julian Nagelsmann, the 29-year-old Hoffenheim boss.

Don’t judge him too harshly though, you should see how lovely he is when he’s not abusing opposing teams’ managers.

If you thought their day couldn’t get any worse, think again. In the 60th minute Steven Zuber slotted into an empty net from outside the area after Leno’s interception of Wagner’s cross forced the goalkeeper to come off his line and into no man’s land.

Even with the introductions of fan favourites, Chicharito and Stefan Kiessling, Leverkusen’s performance didn’t improve.

Despite the scoreline, the Leverkusen Nordkurve continued to chant and wave their flags which can only be admired considering they are renowned as a ‘plastic club’ here in Germany, due to their financial backing from pharmaceutical company, ‘Bayer’. Hence their name.

The support did little to fuel the players however, and it was merely a case of sticking by your team that kept the home fans singing.

The remaining minutes of the game passed by with no drama. The small pocket of away supporters bounced up and down, and sang loudly, well, as loudly as you can with just 200 people. Hoffenheim aren’t exactly a popular club in Germany.

The full time whistle sounded and boos once again greeted the referee, who in reality, didn’t have a bad game. But it was the sending off after just six minutes which caused the game to change.

One can only wonder what scoreline would be typed up on the scoreboard had the game been 11 v 11 for ninety minutes.

Take nothing away from the visitors though. It’s not always as easy as you’d think to play against ten men. Hoffenheim demonstrated how it’s done.

It’s now four wins on the bounce for Julian Nagelsmann’s side and they’re up to an impressive third place behind Hertha and of course FC Bayern.

Leverkusen can only hope they get themselves back on track next week when they visit a disastrously out of form Wolfsburg side.