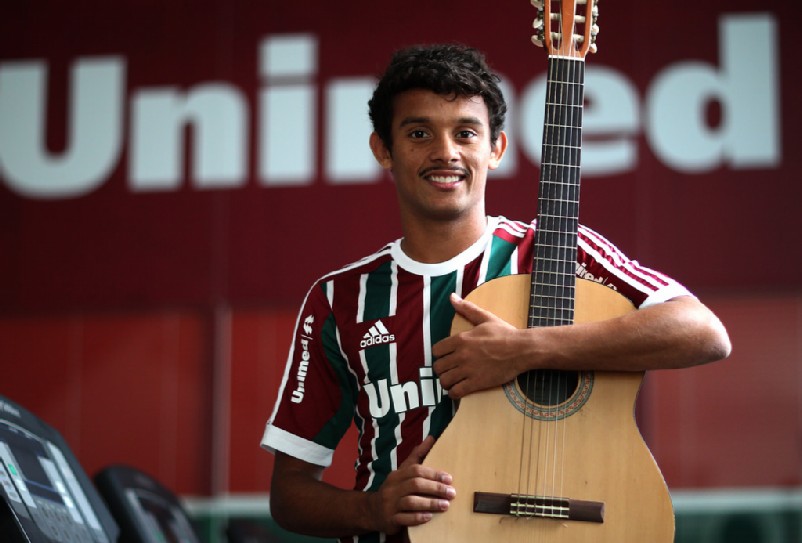 In an ever busy season in Brazil it comes as no surprise that Robinho is making the headlines with his goals and trickery but for some he wouldn’t be the star performer of the campaign.

For these people the player drawing their attention is based at the Maracana in Rio – Gustavo Scarpa.

Upon first impressions it’s hard to look past his boyish appearance—his lean frame and baby face—but as soon as he has the ball at his feet he separates the boys from the men.

Fluminense boss, Eduardo Baptiste, seems to be getting the best out of the 22-year-old by playing him on the right as part of an attacking midfield three.

The attacking midfielder has a tendency to cut in from the wing onto his stronger left foot and hit a thundering shot towards goal.

In this position he has managed 8 league goals and 8 assists. Only the former Real Madrid and Man City striker, Robinho, has been involved in more goals this campaign.

Scarpa, also known as Chutavinho (Little Shooter), was originally spotted by Fluminenese at the age of 9 during a futsal match, but he didn’t sign with them until 2012.

In his 4 year spell he talks repeatedly of his determination and the importance of hard work. His father, a football coach back in his birthplace, Campinas, is constantly reminding him to keep his feet on the ground.

This would have been put to the test earlier this year when called into the provisional 30 man Brazilian Olympic squad. Unfortunately he didn’t make the final cut but that doesn’t seem to have effected his domestic performances.

One man that failed to keep his feet grounded was his fellow countryman and childhood idol, Ronaldinho. While Scarpa would agree that his style is very different from his hero, his ability from free kicks draws similarities.

Another noticeable attribute of the protege is his on field busyness which may come from watching Willian of Chelsea, whom he claims to admire.

If he continues to reap the benefits of his hard work in the form of outstanding performances I can only imagine the big money European clubs will come knocking.

Then it’s up to Gustavo to take the opportunity and outgun previous Brazilian wingers like Denilson who some may say fell short of the early hype.

Time will tell if that’s the case but for now he will just have to keep rifling efforts goal-ward in Rio.

In the league he is currently in 2nd place in the statistics table for shots per game, with 3.6, and also second in the assist charts, demonstrating his importance to the club.

With an away trip to Cruzeiro next, followed by home and away fixtures to Atletico Paranaense and Ponte Preta, Fluminenese will be looking to Scarpa to help them finish as positively as possible.

With the top six spots in the league now reserved for Copa Libertadores, Flu are still in with a chance of qualifying.

Whether they do or not may be a factor in the young star moving on to the next stepping-stone in his career and whichever club it is, Europe or South America based, they’ll be gaining a very hot prospect.

The next Denilson? The next Ronaldinho? Maybe. Maybe not. Time will tell.