Raffaele Cretaro – One Of Our Own 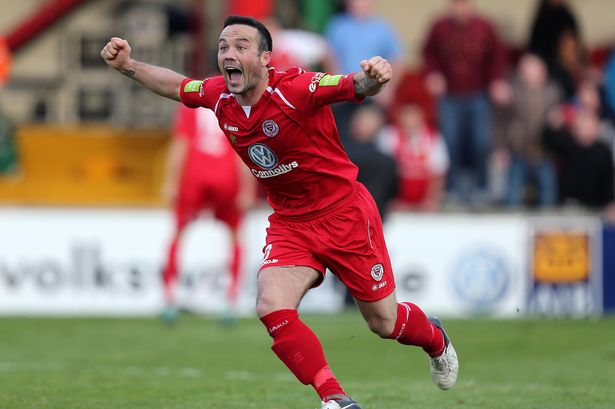 Very few players in the League of Ireland get the adoration and love from fans that the Tubbercurry Tornado*, Raffaele Cretaro, gets from the Sligo Rovers fans week in, week out at the Showgrounds.

Having started his career playing with his local team in Tubbercurry, Raff (as the fans like to call him), was their standout player over the years he played local underage football.

I had the privilege or misfortune to play against him on a number of occasions. Sometimes we won, sometimes we lost but I remember looking at him at times and thinking, wow he’s got the ability to play football at a higher level, if not League of Ireland, then definitely the U.K.

It came as no shock so then when in 2000, Raff left the confines of Junior Sligo/Leitrim football to join Sligo Rovers, his local boyhood team.

“To play for your home town club is a privilege I never thought I’d get as a youngster, but to do so on the level I have done is the stuff dreams are made of. Getting to play in front of your family friends & fans from your home town is a feeling that will never leave me especially winning the league in 2012 in the Showgrounds, Roy of the rovers stuff.”

Between 2000 and 2005, Raff established himself as fan favourite, and would have been one of the first names on the Sligo Rovers team sheet.

In his first spell at the club Raff made 173 appearances and scored 17 goals, but in 2006 Raff went off to pastures new and signed for local rivals Galway United.

He made a total of 25 appearances for the Tribesmen and scored 5 goals. He was welcomed back to the Showgrounds for the 2007 season and stayed for two years making 107 appearances and scoring an impressive 28 goals for the Bit O’Red.

Cretaro was off on his travels again for the 2010 League of Ireland season. This time he signed for Dublin side Bohemians.

In his one season in Dublin he made 24 appearances and scored a measly one goal. In 2011 he was once again back with his home town club Sligo Rovers. He was part of the team that in 2012 won the league title and he helped the Bit O’Red win the FAI Cup the following season.

As it stands, Raff has made 191 appearances and has scored 36 goals in the last five seasons for Rovers.

This season he surpassed the record appearance and record goal scorer for Rovers. He finished the season on ten goals, joint top of the Rovers scoring chart with young Ireland international Kieran Sadlier.

For many fans Cretaro is Mr Sligo Rovers. Liverpool fans will say if you cut them they bleed Liverpool red, well I’ve no doubt that if you cut Raff (and I’m not suggesting anyone does that) you’ll find he bleeds Sligo Rovers.

Raff is one of those players alongside Gavin Peers who has been at Rovers for the good times as well as the bad times.

He played for the club when it was a part time club and there were only a die hard 200-300 fans attending the Showgrounds on a weekly basis to see Rovers play.

He has seen players go on to bigger and better things like current Ireland captain Seamus Coleman, and has seen players come in, who for one reason or another haven’t settled at the club and have disappeared.

He is the player the younger fans will hang around to see after every game and he rarely disappoints them, signing autographs and posing for pictures with adoring fans often long after a game is done.

*Tubbercurry is a small village in South Co. Sligo in case anyone is wondering.