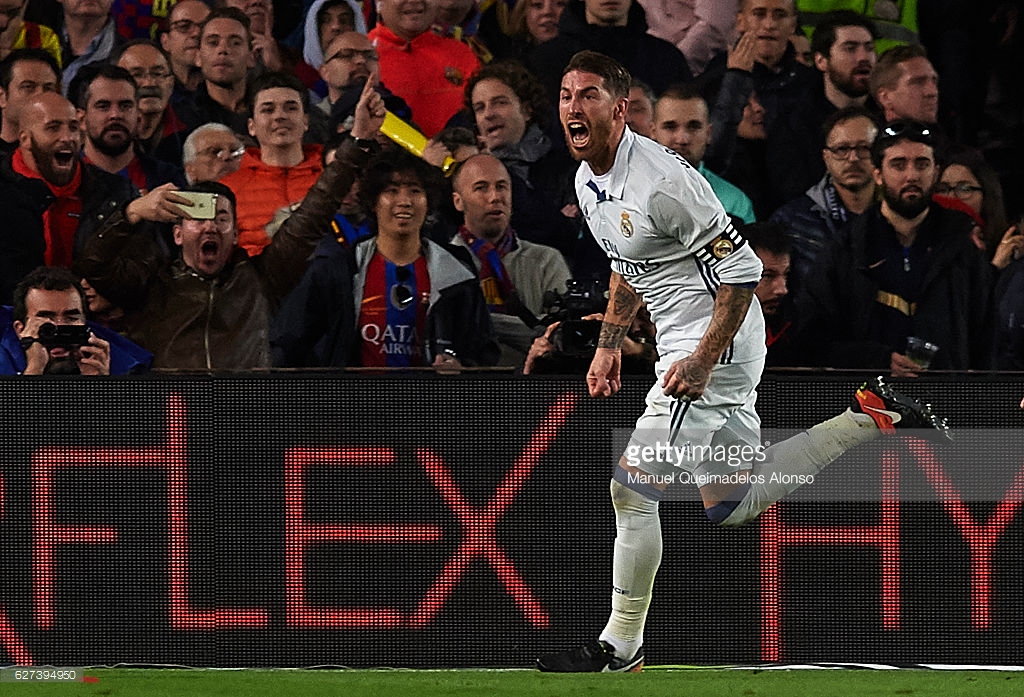 Twice this season, Sergio Ramos has shown us his ability to rise to a vital occasion, seize it, and put Real Madrid on his back. First, it was in this year’s UEFA Super Cup against a Sevilla side that made sure it would be an entertaining affair and a difficult one at that for the defending Champions League winners.

But as hard as Jorge Sampaoli’s men fought, in came Ramos to head a 90th-minute equalizer past Sergio Rico to put his side back on even terms with a 2-2 scoreline. Soon after, Dani Carvajal would score the winner and Los Blancos were lifting yet another trophy.

Carvajal's goal was lucky. It was #Ramos' clutch header that got them in the position to win. Always him… pic.twitter.com/EUr9FDCDsK

In yet another crucial match this past weekend, Ramos struck again against Barcelona to secure a 1-1 draw and maintain a six-point cushion over the Catalan club. If Real Madrid win the LaLiga title this season, they’ll have much to thank Ramos for from the season’s first El Clasico.

When the hosts were dominating the second half, pushing to add to their 1-0 lead after a Luis Suarez header, Madrid came sniffing around for a goal as the game was nearing the 90th minute. A cross from Carvajal found the Madrid captain’s head but went over the crossbar and soon after a Cristiano Ronaldo headed effort also couldn’t make its way past Marc-Andre ter Stegen.

As it happened, Arda Turan would gift Real Madrid a late set-piece opportunity, something that the former Sevilla defender lives for. Something that now feels certain in world football: there’s no doubt it is moments like these that get Ramos excited. You could see it in the way he was eyeing Luka Modric just before the Croatian maestro would pull the trigger and send the ball toward him.

Ramos is good in the air – we know this. You can question his off-the-ball decision making and his unfortunate ability for racking up the cards, but the man seems to glide over opponents in the penalty area.

Ah, the penalty area. A place where the former 2010 World Cup winner has made his name. An area on the pitch that will instantly come to mind when Madrid supporters are asked what the first thing that comes to mind when someone mentions, “Sergio Ramos.”

It was no different this past Saturday. He was good in the air. Modric fired the ball into the spot that Ramos had communicated with him through his eyes, and the Spaniard finished. The Camp Nou went silent and many in the crowd probably looked around, turned toward the person nearest to them and asked the same thing I asked my father, sat on the couch next to me, “Why is it always him? Why always him?”

Yes, as an Atletico Madrid supporter and journalist, watching Sergio Ramos perform in the final seconds of a game and lift his side is something  you know all too well and something that springs forth sad memories. What happened in Lisbon in the 2014 Champions League final will live in Madrid folklore forever. We all know what happened. And if you don’t, you can probably guess. Sergio Ramos of Real Madrid heads the ball to score the equalizing goal during the UEFA Champions League Final between Real Madrid CF and Club Athletico de Madrid at Estadio da Luz in Lisbon, Portugal, on May 24, 2014.
Photo: Manuel Blondeau/AOP.Press/Corbis

Ramos’ late equalizer in Lisbon gave Real Madrid the opportunity to fight another day and finish off Diego Simeone’s men in extra time. It was a crushing defeat to witness, but when he did the same in the first Clasico of this LaLiga season, I couldn’t help but tip my hat to him. The guy deserves it.

It was Ramos’ fourth goal of the season across all competitions, fourth in a Clasico, and 75th career goal. The Real Madrid skipper loves to score goals. He’s admitted to being “bored” at the back sometimes and has a “striker’s soul,” per Spanish football writer Sid Lowe.

Whether it be the three late equalizers mentioned throughout in this piece, his goal in the UCL final in Milan this past May, scoring twice against Bayern Munich during the 13/14 UCL semi-final, or the countless goals he’s racked up during his incredible career, Ramos has done his job well. He’s been the quintessential Galactico for Real Madrid and the perfect defender for tiki-taka football with the Spanish national team.

The Spanish defender has been criticized heavily over the past two seasons, especially for long stretches last season, but the man continues to respond to the criticism in games of significant importance to Real Madrid, in games that turn stars into legends and Ramos is certainly on his way to becoming the latter.

Some would say he already is.