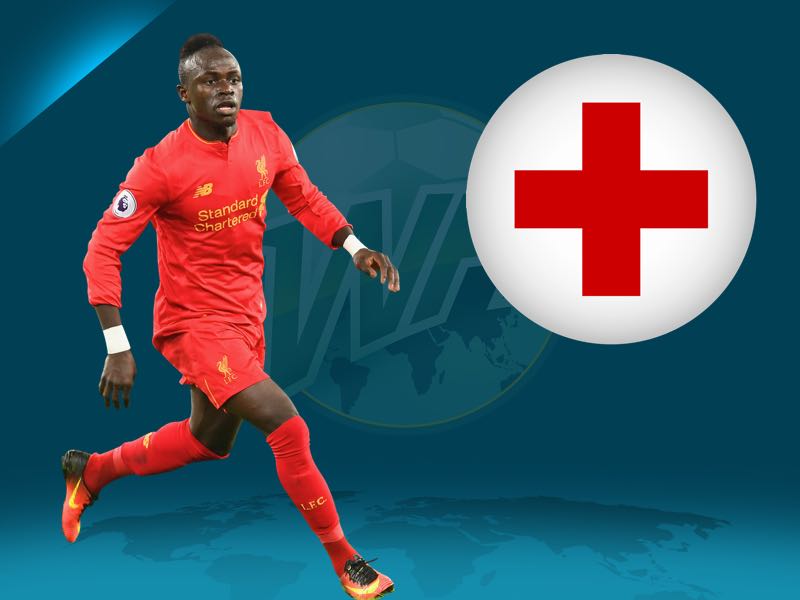 Liverpool will reveal the full extent of Mané’s injury later today as Monday saw them nervously await a full diagnosis of the forward’s knee damage.

The Senegalese star, who has been pivotal in Liverpool’s style of play since he arrived from Southampton, limped out of Saturday’s Merseyside Derby versus Everton after a clash with Leighton Baines.

Initially Mané tried to carry on, but soon collapsed to the ground in pain before being helped off the pitch by the Liverpool medical staff. Normal protocol is for players to wait 48 hours to undergo a MRI scan – this allows any swelling to subside.

However, Liverpool were so worried by the injury to their Senegalese player they brought that scan forward to Sunday afternoon.

The club are reportedly sweating on a “six-month layoff” should the extent of his injury be the worst case scenario—damage to both the Medial Collateral Ligament and Anterior Cruciate Ligament, or MCL and ACL as they are more commonly known.

Mané would then require an intensive rehabilitation package followed by a preseason work up. This could see a return to match action as late as November this year.

Should surgery be required then Liverpool will hope that Mané’s path to recovery follows one similar to that seen by the then Liverpool forward, Luis Suarez.

The Uruguayan injured his knee in May 2014 training for the World Cup, but following key hole surgery to his meniscus he remarkably returned to match action just six weeks later, going on to score two vital goals against England in his first match back. Suarez was lucky at the time, only sustaining light damage to his meniscus.

Mané missed crucial games in January through participation in the African Cup of Nations. This coincided with a disastrous slump in form for the Reds as they dropped vital points which ultimately saw then crash out of the title race.

With Liverpool experiencing their worst ever January in the Premier League era it was only the return of Sadio Mané that steadied the ship.

Another lay off for the energetic forward, just as the Reds look to have Champions League qualification in their own hands, would be catastrophic—Mané leads the Red’s scoring charts with 13 goals and 5 assists.

A meniscus tear is a common injury to the cartilage that stabilizes and cushions the knee joint, and his injury alone would see the Senegalese forward miss the rest of the season.

However, damage to either the ACL, MCL or both, at the same time as a torn meniscus is not uncommon. In this case, the layoff could be the worst one imaginable, six months.

With the extent of Mané’s injury due to be released during Jürgen Klopp’s Bournemouth pre-match press conference, later today, Liverpool will be pinning all their hopes on a scenario that the damage is slight and not a full MCL or ACL tear.