The Brothers Alcântara: On the Path to Greatness 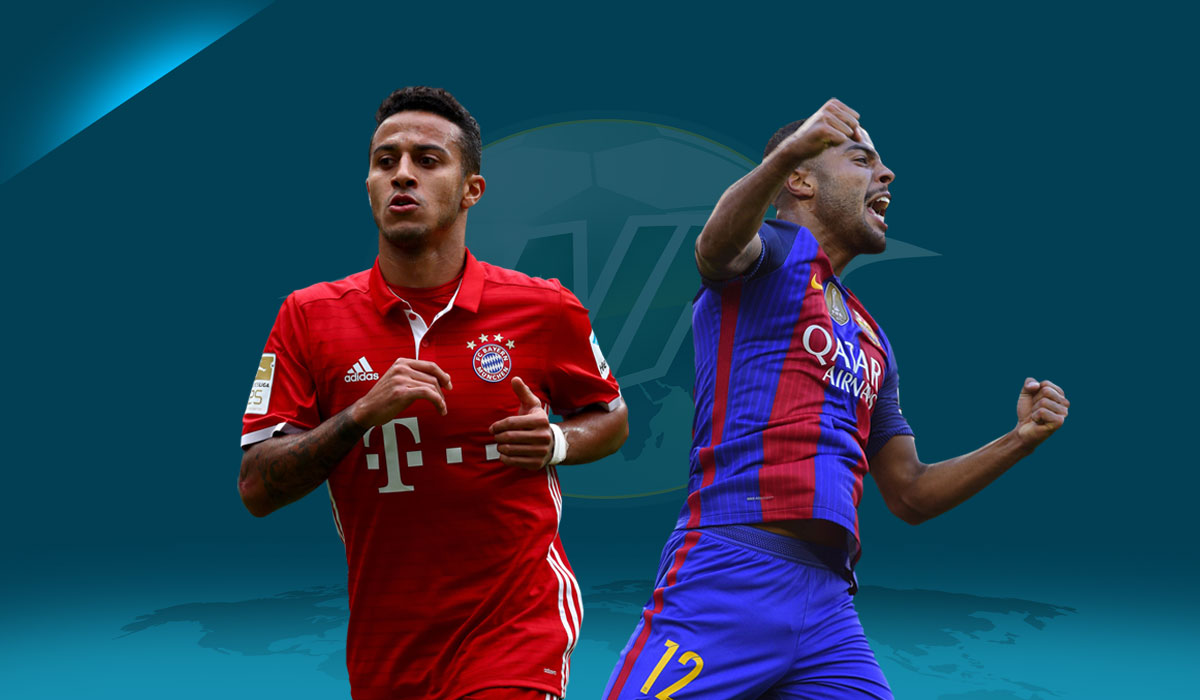 With extensive trophy hauls that even some of the most seasoned veterans are unable to boast of, the brothers Alcântara — both the fruits of Barcelona’s prestigious La Masia academy — have two of football’s biggest clubs attempting to tie them down to long-term contracts while European rivals wait in the wings.

A look back through the history books will produce no end of fine examples in which not one, but two sons of undoubtedly beaming parents, were blessed enough to have what it takes to make it as professionals.

As seen with the likes of the Nevilles, the Baggios, the Inzaghis, and the Pogbas, however, one often outshines the other and has, with all due respect, found himself on the fortunate end of a talent imbalance.

‘What say you of the Laudrups and the Charltons?’ is often the retort, as our Brasileiro brethren scoff at a gringo’s insultingly misguided dismissal of brothers Socrates and Raí.

Yet the point still stands, despite the lofty heights reached by either party across these admittedly sound suggestions.

As Zinedine Zidane’s four offspring continue to stutter through the Real Madrid youth system — with Enzo’s recent Copa Del Rey debut goal momentarily silencing critics while cries of nepotism echo around the Bernabéu — and as was witnessed through Jordi Cruyff’s painful struggles at Manchester United before being cast off to lesser-reputed Spanish clubs, there are never any guarantees that natural ability will be passed down from father to son, regardless of the abundance of footballing genius to spare.

Perhaps at least one of Thiago Messi, Milan Pique, Benjamin Suarez, or Neymar Jr II — David Lucca — all recent inductees to the aforementioned La Masia — might buck the trend.

Until then, one ridiculously talented family might have already successfully managed to connect all three of the dots.

Sons Thiago and Rafinha Alcântara are seemingly capable of breaking the mould by becoming a unique set of brothers equally talented and successful as each other.

Things got off to a fine start with father Mazinho. A Palmeiras legend and integral part of a 1993 and 1994 Brazilian championship winning-side containing the likes of Rivaldo and Roberto Carlos. He was a USA ‘94 World Cup winner with Brazil, and perhaps best remembered for the famous ‘rock-a-bye-baby’ celebration he took part in alongside Bebeto and Romario.

Indeed it was during this spell at Palmeiras that youngest son, Rafinha, was born in São Paulo. Coming through the Barcelona academy, he forced his way into the B team which for a short period was overseen by club legend Luis Enrique, who then took him to Celta Vigo on loan for the 2013-2014 season when he was voted La Liga Breakthrough Player of the Year.

After Tito Vilanova’s forced resignation through illness, Rafinha was then dragged back to the Nou Camp by Luis Enrique, who was then about to assume the mantle as head coach. He became a permanent fixture in the 2014-2015 treble-winning side that received plaudits for its more physical, unique brand of attacking football.

At the start of the following season he was awarded a contract extension until 2020, but had his campaign cruelly cut short by a torn cruciate ligament that kept him sidelined from regular football until last summer.

Upon his return, Rafinha slipped seamlessly back into a new-look 3-5-2 on the right side of midfield until another injury in April ended his season prematurely.

On the international front, in 2016 he had claimed Brazil’s first ever football Olympic gold in Rio alongside Gabriel Jesus and Barça team-mate Neymar. Around this time he was rumoured to be close to a call up for Tite’s senior national side in the wake of his improved form.

While Rafinha being out of the side cannot be deemed the sole cause of Barcelona’s recent woes, he had undoubtedly gone some way to filling a void down the right flank created by the baffling sale of compatriot Dani Alves, and he linked up well with his fellow academy graduate Sergi Roberto.

Additionally, his injury absence has left an already stretched Barça squad threadbare in a month that contained a crippling loss to bottom-half Malaga, a second consecutive Champions League pummelling away from home at Juventus, and this weekend’s potentially league title deciding Clasico.

Behind the scenes at the Nou Camp they see Rafinha as the heir apparent to Xavi in an era when there seems to be a worrying lack of quality coming through La Masia.

This has resulted in ill-advised splurges on the likes of André Gomes, and the club have gone into panic mode over rumblings that 24-year-old Rafinha is unsettled by the announcement of Luis Enrique’s departure at the end of the season. There’s a fear that he will consider other options, of which there are plenty.

Naturally, they are keen to get him to commit to a contract extension in order to avoid a repeat of the events which culminated in the sale of his brother Thiago — the one that got away — to Bayern Munich in 2013.

Thiago was born in San Pietro Vernotico, Italy on April 11, 1991 during Mazinho’s spell at Lecce, and broke into the Barça senior side sooner than his brother, in 2009.

The elder of the two brothers was personally groomed by Pep Guardiola in a similar manner to which the current Manchester City boss was himself turned into a midfield linchpin by Johann Cruyff, becoming part of the famous Dream Team that brought Barça four consecutive La Liga titles and its first European Cup in 1992 at Wembley.

Coincidentally, Thiago sat on the bench at the very same stadium as part of the 2011 Champions League winning squad that beat Manchester United in the final.

By the following season had confirmed himself as a regular in a relatively fruitless campaign.

Jose Mourinho’s Real Madrid pipped Barça to the post in La Liga and his former club Chelsea scuppered their chances of retaining Europe’s premier club competition, before going on to claim it themselves in Munich.

This sent a burnt-out Guardiola off on a year’s sabbatical in New York after a Copa Del Rey final win against Bilbao.

A reversal of fortunes saw Barça take back the La Liga crown with a joint-record haul of 100 points in the 2012-2013 season, matching that of Madrid from the year before.

Thiago continued to progress at the Catalan club, but Mazinho was incensed by the lack of attention he believed his son was being shown.

He ordered his son’s agent, coincidentally Pep’s brother Pere, to manipulate a contract stipulation of a minimum amount of playing time that, if not met, would allow him to leave the Nou Camp for a fee much lower than his €90 million release clause.

As it had now become common knowledge that Guardiola had used his time in the Big Apple to take up German classes, his first line of action as newly-appointed Bayern Munich coach would be to lure his former protégé to the Allianz Arena – apparently insisting that it would be “Thiago oder nichts” (Thiago or nothing).

Naturally, having first been picked at the age of 10 and then nurtured full-time from 14 onwards after a spell at Flamengo, the attacking midfielder found it difficult to leave Barça.

He was, however, enthused by both the faith shown in him by his mentor and the prospect of a new challenge after having won everything at his boyhood club.

At the end of negotiations, he was allowed to depart for an absurd €25 million.

Unlike Rafinha, Thiago had chosen to play for Spain and was fresh off being named player of the tournament as a U-21 World Cup winner, where he scored a first half hat-trick in the final against Italy. This made the fee all the more surprising.

Starting with the Club World Cup, which he had already scooped twice with the Blaugrana, his acquisition of trophies would continue at the Bavarian outfit.

Despite a lengthy injury that kept him from representing Spain at the 2014 World Cup, Thiago eventually become one of the first names on a Bayern team sheet which boasted an embarrassment of riches.

During his time out through injury in that 2014-2015 season, he took the opportunity to film a four-part documentary-cum-vlog entitled 371 days.

Former Bayern Sporting Director, Matthias Sammer, once described Thiago as “Xavi one moment, Iniesta the next,” and this year, he has been the recipient of even more praise for his performances –- including the one he put in last Wednesday against Real Madrid.

He effortlessly stood out amongst the likes of predecessor Toni Kroos, Luka Modric, and Xabi Alonso as part of an enthralling midfield battle before a Javi Martinez red card paved the way for a Cristiano Ronaldo double.

Now, Bayern find themselves in a similar predicament to the one faced by Barça.

They are eager to get their number six to sign on the dotted line and commit his long-term future to them, but an endless list of potential suitors, including, of course, Pep’s Manchester City, queue at the door hoping to turn his head.

Potentially facing anything up to a decade left at the top of the sport, providing they stay injury free, the Alcântaras have every chance of hanging up their boots high on the list of the most decorated individuals to ever play the game – let alone its most successful, talented brothers.

Should a positive return from injury result in a Brazil call-up for Rafinha, and if Thiago continues as a starter for Spain ahead of Russia 2018, Mazinho might not be the only member of the family to have reached the summit of international football too.

Loading...
Newer Post
Ryan Babel: Back on Track on the Banks of the Bosphorus
Older Post
Video Technology in Football: Once a Suggestion, now Desperately Needed