Liverpool’s “Corbyn Banner” and the Role of Sport in Politics 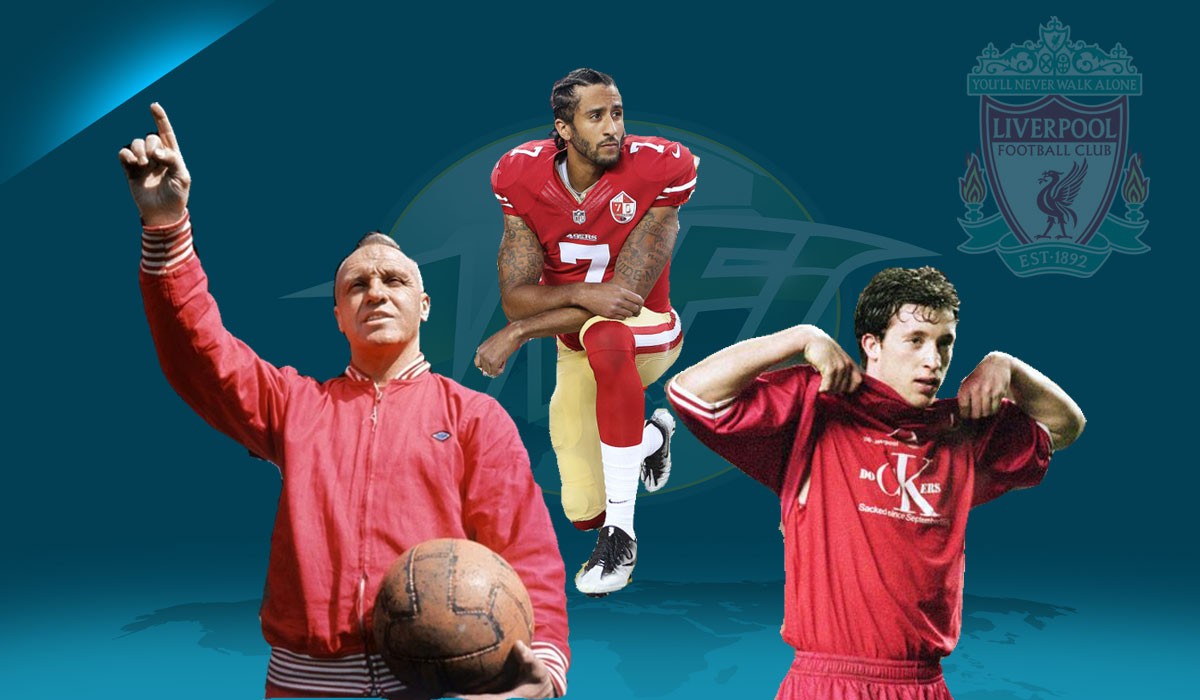 Reports emerged, a day before Liverpool’s game against Southampton, that a “Jeremy Corbyn banner” was to be unveiled at Anfield.

The news was met with mixed responses.

For some the banner was a sign of pride, while others believed it to be embarrassing and a great deal of younger Liverpool FC fans could not quite understand what politics and the Parliamentary Labour Party’s leader had to do with a Liverpool match against Southampton.

To understand this is it’s necessary to have a look at British and Liverpudlian social, economic, and political history.

The Liverpool region has been associated with the Labour Party for decades, and since the 1960s its constituencies have regularly elected Labour candidates.

This association was strengthened in the 1980s, when Conservative Prime Minister Margaret Thatcher provoked hatred towards her and her party in Liverpool and much of northern England and Scotland.

In her first term Thatcher enacted economic reforms that saw unemployment and inflation across the country rocket.

This monetarist “shock therapy” was deeply unpopular, and satisfaction with her leadership in March 1981 stood at 16%.

Riots broke out in Toxteth and in other areas of the country between April and July 1981, with tear gas used, over 500 people arrested, and one person killed after a collision with a police vehicle.

By 1985, the unemployment rate was above 20% and riots ensued again.

The north of England failed to reap the benefits of Margaret Thatcher’s economic reforms, which disproportionately benefitted the south of England and London in particular, as the economy shifted from being based around providing blue-collar labour-intensive jobs, to services instead.

This legacy in itself was enough to endear the Labour Party to Liverpool, but Liverpool was also home to the militant faction of the party which organised mass protests against government spending cuts.

Famously, Chancellor Geoffrey Howe suggested to Thatcher that Liverpool should be left to “managed decline“, and pushed against investing in the region believing it to be a waste of resources.

For the people of Liverpool during this period, football was their source of solace as the city’s clubs dominated the English top flight in the 1980s. Liverpool won eight titles between 1979 and 1990 with Everton chipping in with two.

The league title went to the city in eight of the ten seasons during the 1980s, while Liverpool also won the European Cup in 1981 and 1984.

However, though the relationship between the Conservative Party and the people of Liverpool was poor, it had not yet reached the point of no return, but the government’s handling of the Hillsborough Disaster in 1989 changed that.

Upon receiving Lord Taylor’s report into the Hillsborough Disaster, Thatcher asserted that she and the government would not support the full claims of the report as in her view it was too critical of the role of the police.

For former Labour Home Secretary Jack Straw it was Thatcher’s attitude to the police, and developing a “culture of impunity“, which underscored the racial tensions to the riots of 1981, which meant the cover-up to the Hillsborough Disaster developed in the manner it did.

In 2012, Prime Minister David Cameron reported to the Commons that:

“At the time of the Taylor Report the then Prime Minister was briefed by her private secretary that the defensive and – I quote – ‘close to deceitful’ behaviour of senior South Yorkshire officers was ‘depressingly familiar’.”

He also noted how the report stated that there was “no evidence of any government trying to conceal the truth,” but for the people of Liverpool in 1989 the government paid scarcely enough attention to what had really happened, and failed to challenge the narrative of the Liverpool fans being not just responsible, but acting as criminals in the aftermath as The Sun newspaper reported.

The failure of Prime Minister John Major to order an enquiry into the disaster led to him apologising in 2013, but by then the image of a “nasty party” had stuck in Liverpool.

As of now, six of the ten safest Labour seats in the country are all based in Merseyside: Liverpool Walton, Knowsley, Liverpool West Derby, Bootle, Liverpool Wavertree, and Liverpool Riverside.

This leads us back to Jeremy Corbyn and his importance to many of the people of Liverpool.

For many, Jeremy Corbyn represents the old-school Labour politician. A principled man, who went to a state school and is outside of the Westminster Oxbridge educated elite.

Not only this, but Jeremy Corbyn has stood for his entire parliamentary career against the neo-liberal ideas that accelerated the rate of decline of the north of England, and upon which most modern Labour politicians align themselves to.

His speech in 2013 with regard to the Hillsborough Disaster was everything what the those who sought justice for the 96 had wanted to hear from the government since 1989, an open condemnation of the false narrative espoused by tabloids such as The Sun and a hand of support for the families of the victims.

“Today, after 27 long years, the 96 victims of the Hillsborough tragedy – and their families – have finally received justice.

“The youngest victim was just 10, Jon-Paul Gilhooley, and the oldest was 67 years old, Gerard Bernard Patrick Baron. These were fans that went to a football match, as so many of us do, on the 15th April 1989, but never returned to their loved ones.

“I pay tribute to the families and friends of all the victims of the tragedy – as well as many others from the city of Liverpool – for the passionate and dignified campaign they have fought for almost three decades.

“Today they received total vindication for their fight for the truth and for justice.
In the immediate aftermath of the Hillsborough disaster there were some who painted those that died and the fans of Liverpool FC as drunken yobs and thieves.

“The findings of this inquest clearly show that to have been a lie – fan behaviour didn’t cause or contribute to the disaster and the fans have been exonerated of any blame.

“All those that attended the semi-final 27 years ago were innocent victims and it is time that those who peddled those vile and malicious lies recognise the deep hurt they have inflicted on tens of thousands of innocent people – and are held to account.”

The role of politics and government in Liverpool is perhaps more keenly felt than most other cities across the country.

Indeed no other city has banded together over a single cause like the Hillsborough Disaster for as long as the people of Liverpool did. So in this sense, the inclusion of Jeremy Corbyn is hardly a surprise.

Do remember, this is the same club which has a banner of Bill Shankly, Bob Paisley, Joe Fagan, Kenny Dalglish and Rafa Benitez, in the same pose as the famous Marx, Engels, Lenin, Stalin and Mao communist image.

Socialism is very much at home in Liverpool, and that goes some way to explaining why Corbyn and John McDonnell featured at Anfield on Sunday.

Does politics have a place in sport?

However, the debate that took place on Twitter in regard to the banner is far deeper than this. That particular debate was focussed instead on whether politics had a place at Anfield, or sports in general.

This argument certainly does have merit to it; clubs and their fanbases are conglomerates of people across the world, of different races, religions, genders, political beliefs and so on.

The fact is, that football clubs are not strictly neutral, and also there is no reason why they should be either.

For instance, whilst the poppy was intended as a sign of remembrance for the fallen in World War One, it has now come to encapsulate the lives of all of those that have fallen, fighting for Britain.

For many, this is completely offensive. The British Empire was involved in unspeakable atrocities to people across the world, whilst more recently the events of Bloody Sunday and the deeply unpopular Iraq and Afghanistan wars are causes which people find hard to support, especially when considering the wider implications of them.

Every season, James McClean is widely castigated for not wearing a poppy on his shirt, but less than a decade ago this was the position of both Liverpool and Manchester United.

The poppy is intrinsically political, and public opinion has forced clubs into adopting a populist political position.

Hence the assertion that Mr Corbyn should not feature at Anfield because politics and sports are mutually exclusive is false.

The relationship between sport and politics has always existed.

Sports provide an opportunity for those that have a marginalised voice within society to demonstrate against injustices.

Some of the most famous moments in sporting history have come from such motivations. We need only look at the famous Black Power salute by John Carlos and Tommie Smith in the 1968 Olympics, during the playing of the American national anthem, or more recently, Colin Kaepernick’s kneeling in protest to the treatment of African Americans in the USA.

FC Barcelona is widely hailed and respected for their proud Catalonian commitment, with the stripes of Catalunya incorporated to their kit, in the same way the Hillsborough flames are to Liverpool’s.

Indeed, the flags of Catalunya are always visible at the Nou Camp for games, for the desire for independence from a government with a history of oppression to the Catalans is part of a cultural heritage, the same way the socialist beliefs that defined Bill Shankly’s attitudes towards life and the club are reflected in Liverpool.

This is not to say those of a politically right-sided inclination cannot support a club such as Liverpool or any other traditional northern club, for football clubs are global, encompassing and accepting.

But with the city of Liverpool, and Liverpool FC, the principles of democratic socialism and the Labour Party mean a great deal to the identity and culture of both because of recent history.

For the people of Liverpool and Liverpool FC, politics and the values of Mr Corbyn are not just concepts, but part of a rich cultural heritage and identity.

Fans across the world would do well to understand and respect this for the reasons behind this heritage are profound and personal.