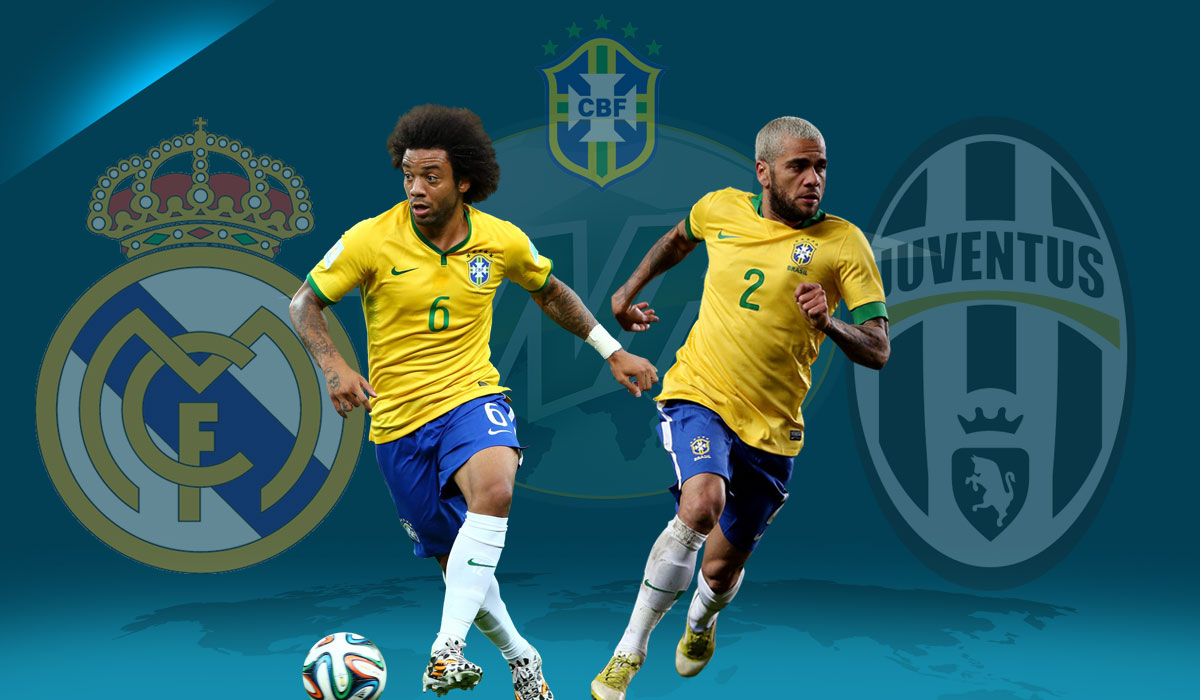 Brazil’s left and right back continue to make waves in European club football, in defiance of those who thought they were either incapable or over the hill.

“I hope he won’t become better than me” joked Roberto Carlos at a commercial event in Madrid late last year, before going on to label his understudy and successor the world’s current best at their shared position of left-back.

A highly-lauded Champions League performance that took in a crucial early block on Thiago, a goal-line clearance, and then an awe-inspiring assist for Cristiano Ronaldo in extra time as Real overcame Bayern Munich at the Bernabéu, saw Marcelo add weight to this claim.

Days later in El Clasico, he would have made the headlines again were it not for Lionel Messi stealing the spotlight with a stoppage time winner. A pretty faultless display was topped off with an assist for James Rodriguez’s 85th minute equaliser.

Evidently dejected, Marcelo placed the blame on himself for having not brought Sergi Roberto down when he had the chance at the start of the move.

The following weekend though, redemption would be achieved via another masterclass that saw him bag a winner of his own as Real Madrid again placed one hand on the La Liga trophy with a 2-1 victory over Valencia.

Exhibiting a part of his game that separates him from more orthodox peers in his position, who often decide on staying wide in order to deliver into the box, Marcelo cut inside on his left foot and then converted with his right in a manner that Arjen Robben would be proud of.

It was probably no coincidence that he ran straight into the arms of his captain Sergio Ramos.

Although Ramos had arrived in Madrid a couple of years earlier, both he and Marcelo were brought to the Bernabéu at just 19 and groomed as the natural heirs to Fernando Hierro, Fabio Cannavaro and of course, Marcelo’s childhood idol and compatriot Roberto Carlos.

Now in their late twenties and early 30s respectively, the two have come full circle on their journey together with the faith shown in them by the club’s hierarchy paying noticeable dividends.

This isn’t to say though, as with Ramos who was even more hot-headed and red-card prone in his formative years, that things have always been rosy for Marcelo.

In the early days, he would often be scolded by his on field seniors for pushing up too far, neglecting his defensive responsibilities and often having the space left by his gung-ho escapades up top exploited by his opponents.

A misunderstanding of his natural joie de vivre as a Carioca native of Rio de Janiero who honed his craft on Botafogo beach, critics also took aim at Marcelo for not taking the game seriously enough.

At the start of the 2011-2012 season, Jose Mourinho brought in fellow countryman Fabio Coentrão to keep Marcelo on his toes after a breakthrough season. Helping Real to their first title in four years, a healthy rivalry played out between the two.

When a lengthy injury saw him miss most of the following campaign however, Marcelo found himself second fiddle to Coentrão under Carlo Ancelotti – who was perhaps spooked after years of overseeing a less adventurous, rocksteady, Paolo Maldini.

2013-2014 saw one of the the lowest points of his career,when the Portuguese was picked over him to start the 2014 Champions League final at the Estadio da Luz, home to Coentrão’s ex-club Benfica.

Current coach Zinedine Zidane, who also lined up alongside Roberto Carlos, has backed Marcelo and recognises the importance of an attack-minded full back in the modern game.

This is possibly linked to how the Frenchman was free to express his full attacking flair in his playing days thanks to the defensive midfield heroics of Claude Makélélé, and has therefore shown great faith in a once cast-out on loan Casemiro to do a similar job in the side he now manages.

Whether it ends in domestic and European double glory or not, Marcelo has without doubt enjoyed his best year at Los Blancos this time around, with increased debate back in his homeland as to whether he can surpass Roberto Carlos as the greatest ever lateral esquerdo (left-sided defender) with a rather biased patriotic dismissal of the aforementioned Maldini.

In any event, it would depend how one goes about measuring two such unique players? By goals scored? That would be rather unfair, as it’s not their primary responsibility.

On clean sheets then, surely more appropriate when discussing goalkeepers and the product of a collective defensive effort between others among the backline.

Funnily enough, Marcelo finds himself at roughly the same point as when the baton was passed over to him by Carlos, with close to a full decade at the club and a similar silverware haul.

Nurtured during a time when European clubs were allowed just one non-EU player in their first XI and South American players took their time in crossing the Atlantic, Carlos managed back-to-back Brasileirão titles with Palmeiras, the club’s last for 22 years, before heading to Inter Milan.

With just a sole season at Fluminense Marcelo has little to bring to the table in this respect, and his recent expression of a desire to one day play for his neighbourhood club Botafogo when his Madrid contract expires in 2020, probably won’t alter that.

Such was the excitement at this announcement however, club hierarchy wasted no time in fitting up a mock number 6 jersey for him.

As Brazil are now among the favourites to lift the Jules Rimet trophy in Russia next summer, and will host Latin America’s premier international tournament in 2019, Marcelo at least has the chance to balance the scales.

Despite Roberto Carlos going on record to admit that Marcelo possesses the better technical ability, the only element that separates the two would be the elder’s prowess as a dead ball specialist.

Contrary to the likes of Andrea Pirlo, who would take a few dainty steps back before masterfully dinking the ball into the top corner, Carlos, rightfully nicknamed el hombre bala or the bullet man, would put the fear of God into the opposition by stampeding from distance before almost putting a hole in the roof of the net with his more successful attempts.

Finding himself way down the pecking order to Cristiano Ronaldo, Gareth Bale and Toni Kroos, Marcelo rarely has the chance to demonstrate any such capability.

Instead, as copied by Liverpool ace and Seleção team mate Philippe Coutinho and credited to Marcelo, he has become more famous for his oddball techniques in blocking free kicks at the opposite end.

An icon at home, Alves is regarded by Brazilians as the world’s greatest lateral direito (right back), despite increased competition from Marcelo’s Real team mate Dani Carvajal.

He is also considered to be the best to ever play the position, up there with former Brazil captain Cafu.

Alves won two UEFA cups and a Copa Del Rey at Sevilla before being bought by Barcelona in 2008.

He was among their star players in the club’s most successful era in its history until this summer, when he was deemed surplus to requirements by Nou Camp officials and allowed to walk on a free after disrespectfully having not been offered a new contract.

Echoing how they similarly pounced on Pirlo, who was shown the San Siro door far too early and went on to win four Serie A titles in Turin, Juventus offered Alves the chance to prolong his career at the top level.

Earlier in the season, a leg break against Genoa earlier in the season seemed to support a common claim that the Brazilian right back, who turned 34 at the weekend, was over the hill and finished, the old man put Italy’s ‘Old Lady’ into the Champions League final.

Two assists for Gonzalo Higuain in the first leg, and an outstanding volley plus an assist in the second leg were enough to help see off Monaco.

Part of a new look back four which also includes ex-Santos man Alex Sandro at left-back, which can revert to an Italian flat back three of Bonucci, Chiellini and Barzagli when required, Juventus had not conceded in the competition for over ten hours.

Should they win it, most likely against Real and Marcelo, Alves will level Maldini as the most decorated European club player of all time.

Like Marcelo, Alves has been complimented for his darting diagonal runs from right to left that in essence make him an attacking midfielder.

This is made possible by cover from Samir Khedira and the two Juve centre backs, or Sergio Busquets in his Barcelona days, leaving Alves to roam free on forward moves.

For Marcelo, it’s Varane, when fit, and Casemiro — who also accommodates the duo in this capacity for the Brazilian national team.

Even though there were sometimes heated exchanges it would be sensationalist to suggest that, despite a fascinating eight year head-to-head battle in El Clasico, the pair has had anything even remotely resembling the sort of club-and-country mixed bag of a relationship shared by Sergio Ramos and Gerard Pique.

Perhaps free of the political and ethnic ties associated with the fixture, they have always gotten along well.

That’s not to say though that, should their paths meet in Cardiff, they will go easy on one another as a thrilling spectacle between the world’s two best laterais, continuing to defy critics and redefine their positions, plays out before our very eyes.