Ramos & Pique: The Best of Friends – The Worst of Enemies 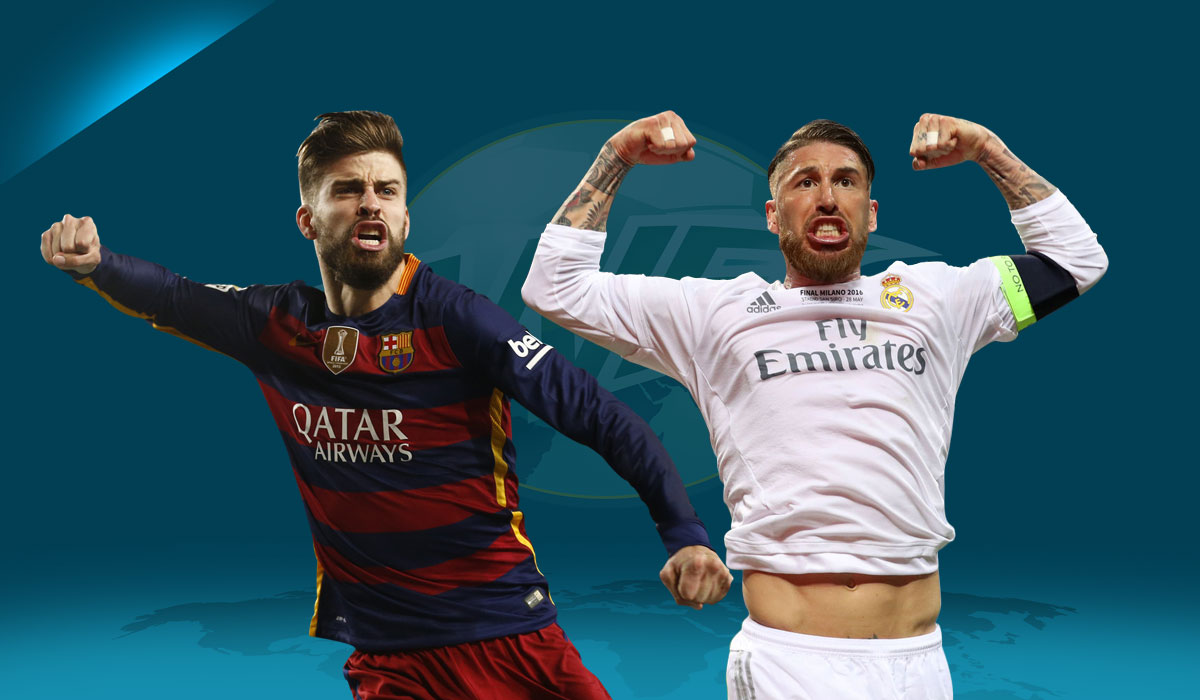 Sergio Ramos and Gerard Pique: Never before have a pair of players got on and played so well together at international level, yet treated one another with such disdain in club colours.

“Talk now! Talk now!” chelped a furious Sergio Ramos whilst seeming to gesture with his thumb that the matter would be resolved in the Bernabéu car park at full time.

The Real Madrid captain’s Clasico dismissal in a 3-2 defeat – his 22nd in all competitions, a club record, and fifth against Barcelona – changed the game according to right back Dani Carvajal, and paved the way for an injury time winner from Leonel Messi that could have huge implications on the La Liga title tilt as Los Blancos attempt to be crowned champions for the first time in five years.

Revelling in Ramos’ misery, and the very figure his heated diatribe was aimed at, was his Barça counterpart Gerard Pique – rounding off a week in which the two had traded barbs on Twitter over supposed preferential treatment for either team by Champions League officials.

Although the pair may have reached the highest echelons of international football in unison and can often be seen laughing and joking whilst on Spain duty, put these two in their club colours and the niceties are immediately thrown on the back-burner as part of a longstanding love-hate relationship that has played out for almost a decade.

Despite less than a year between them in age, it took a while for their paths to cross, with a four-year stint at Manchester United interrupting a natural progression from the La Masia academy to the Barça first team for Pique.

Ever vocal on the increasingly-polarising subject of separatism from the Spanish state, Pique, whose maternal family name is ironically Bernabéu, is Catalan through and through.

Such is the contempt held for him by fans around Spain who have constantly doubted his dedication in representing their homeland, the controversial figure has already announced that Russia 2018 is likely to be his last major tournament for La Roja.

In Pique’s ideal world, which Ramos would have you believe to be a cloak-and-dagger dystopia where “everything is a plot against him” as La Liga and Real officials meet in dark alleys, perhaps he may find himself leading a recently-liberated Catalonia to Qatar 2022.

Ramos, purchased from Sevilla in 2005 as a gawky 19-year-old for a then-record €27 million fee for a teenager, cannot be described as a lifelong Madridista in a similar vein but is undoubtedly proud of his mainland identity. In the past, he has taken umbrage to Pique’s conduction of interviews in Catalan while on international duty.

Now in his 12th season at the Bernabéu, he has become one of his club’s main icons, symbolic of everything it prides itself on.

Thanks to Champions League final heroics in stoppage time against cross-city rivals Atletico in 2014, in addition to his team’s only goal in the 2016 repeat fixture, his place is eternally cemented in Real folklore.

To try and identify the starting point of the events that lead us to the aforementioned fracas, we must travel back to a Groundhog Day Clasico at the start of the 2010-2011 season in which Ramos was similarly-dismissed for a feral lunge at Messi. One would think that, off the back of becoming world champions together that summer in South Africa, Pique would have shown mercy.

Instead, he fanned the flames by raising his hand to show five fingers representing each one of the unanswered goals Barça slotted home against Real in the Nou Camp that evening.

At the business end of the same season, in April 2011, tensions reached fever pitch when the two teams faced one another four times in just 18 days.

While Real won the Copa Del Rey, they were knocked out of the Champions League in the semi-final by their bitter rivals, who then went on to lift the trophy at Wembley in addition to La Liga.

Although Carlos Puyol provided a buffer between them at the successful 2010 World Cup as Ramos slotted in at right back, retirement left Pique and Ramos to their own devices at Euro 2012.

By this point, their tolerance of one another was an at all-time low with rumours abound that Jose Mourinho, who had likewise disapproved of Xavi and Iker Casillas’ friendship, was to blame.

More renowned for its mesmerising offensive flair, Spain’s all-conquering tiki taka side was just as remarkable for a watertight defence that rarely gave up goals – a feat that would have been impossible to attain without a high degree of comradeship between its two centre-halves.

According to Ramos himself, he took Pique to one side during training camp preparations and a truce was struck as the two put aside their differences.

Realising that any attempt to win the Poland and Ukraine-held tournament would be futile should their childish bickering continue, they identified themselves as two great players who needed one another in order to flourish.

Indeed, this echoes a common rebuttal from Pique’s detractors, supported by Barcelona’s long-standing defensive troubles, who find him to be a liability without his mentor Puyol or Ramos to hold the reins and keep him in check for either club or country.

Since this ceasefire agreement, any animosity had been reduced to light banter across social media.

Even after Pique quipped that video technology decisions worked in Spain’s favour against France recently due to them wearing white shirts usually associated with Madrid, Ramos took it his stride and complimented Pique for how well he looked and played in his.

In a remarkably tense title race that seems likely to go down to the wire though, relations have again soured after Pique spoke out on the performance of match officials during last week’s controversial Real victory over Bayern Munich.

In retaliation, Ramos ordered Pique to “rewind and watch the PSG match” in reference to certain decisions that went Barça’s way during their miracle comeback at the Nou Camp last month.

The stage was set then for the latest Clasico, widely-lauded as one of the most thrilling in recent memory. Ramos, who had gone over a calendar year without a red card and had seemingly put that part of his game behind him at 31 years of age, lost his head and was shown a red card less than 15 minutes from time.

Perhaps to save himself the type of costly three match ban recently handed to Neymar for similar behaviour against Malaga, which saw him join 650mn worldwide viewers tuning in at home, Ramos insisted his sarcastic applause as he made his way down the tunnel was aimed at Pique and not the referee.

Pointing to the directors box, a reference was also made to a 1-1 draw at Villareal in January where Pique went into conspiracy mode and exploded at Real Madrid-supporting La Liga president Javier Tebas, given VIP treatment to commemorate the renaming of the El Madrigal, for supposedly influencing the outcome of the game.

Doing little to quell Pique’s paranoia, Ramos’ excuse seems to have had the desired effect as a ruling the following Tuesday decreed that he will miss just one match for his horrendous tackle and dissent.

Post-match, Pique commented that Ramos would regret his actions upon seeing a replay of the incident before failing to pass up the chance to take a sly dig at Madrid’s volatile reaction whenever refereeing decisions don’t go their way.

Making no secret of his intentions to become Barça president one day, it’s likely that Pique’s hatred of Real – a club he stated he could never work for  – could continue long after both players have hung up their boots.

Akin to Jamie Carragher and Gary Neville however – legendary combatants of English football’s equivalent to El Clasico as former Liverpool and Manchester United players but now fellow pundits – it’s likely that he and Ramos could soften up towards one another in the end.

With games coming up against Colombia and Macedonia, the pair, who despite their contrasting club identities are actually quite alike as attacking-minded defenders often on the scoresheet, will again demonstrate their professionalism by laying down arms for the well-being of the Spanish national team.

As Ramos himself reiterated however, just don’t expect them to “share a hug after a Clasico”.