Two-Week Takes from Serie A: The Calcio Consultant 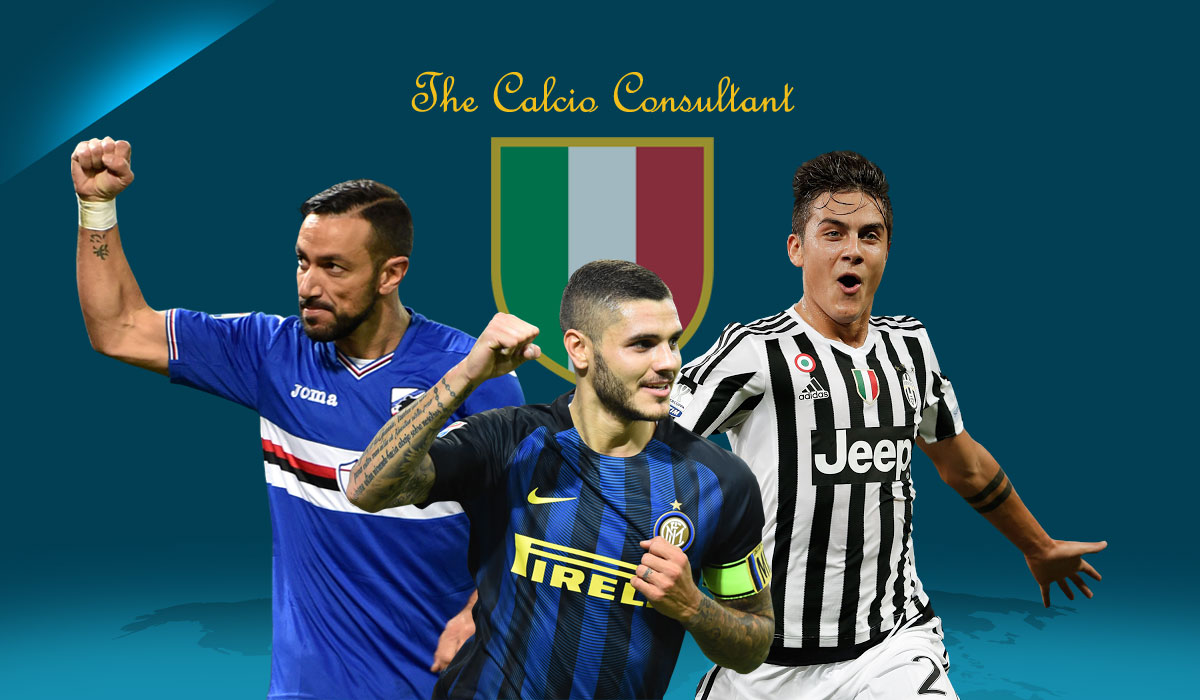 Hopefully people will be as hesitant to be as critical of this instalment, just as Serie A officials were hesitant to use VAR (see Roma-Inter, Milan-Cagliari). Writes Frank Crivello.

We’re all in a nice lather with two full match weeks being played. We start to get a little sense of what everyone has, getting excited for the season to be in full swing.

Then everything is halted by an international break.

For me this is the dumbest FIFA break on the calendar, though Spain v Italy will be tasty.

So for this go-round I have two-week takes on every team. Let’s see if they are any different than my first impressions from a week ago.

The new number 10 has been a 10 in his first two games. Particularly encouraging is Paulo Dybala’s tripletta was away at Genoa. I’ve been critical in the past of Dybala in that he did much of his damage last season at home, but didn’t seem to sustain the same performance away or at neutral venues. Cagliari home, Genoa away; this is where they should be. Overcame being 2-0 down away with the resolve you should expect from the champions.

I’ll put Inter’s start to the season up against anybody’s in Europe in terms of being the most impressive. Won their first two games away against traditional powers in Fiorentina and Roma. The 3-0 win over Fiorentina will look better and better as the season goes on. Mauro Icardi is scoring everything he touches, and 35 goals come the season’s end would not surprise me. The full backs are better, and they (for now) have solved their Geoffrey Kondogbia problem. A lull will come, and it will be interesting to see how Luciano Spalletti will cope with it.

| #Spalletti: “We did well to persist with our style of football.”
https://t.co/yzvE9YmVlV#RomaInter #FCIM ⚫️ pic.twitter.com/YuzbjMY5Vu

The Partenopei may score 100 goals in Serie A this season. They overcame an Atalanta side that was hungry to bounce back from a loss, and they did so as if they were watching Floyd Mayweather carry Conor McGregor before finishing things off. Seemingly impossible to stop going forward. Try to stop Mertens? Insigne will make you pay for that. Slow down Insigne? Marek Hamsik will step in. Piotr Zielinski and Marko Rog getting on the score sheet is further evidence of that.

A struggle was needed to see how this revamped side would respond. They got just that against Cagliari. Suso’s free kick spared their blushes. For all their new talent, it’s a returning player (Suso) who has been their best player so far. Despite the early success, Milan are clearly a work in progress; the midfield and defense need to be better connected. The fixture list has offered the Rossoneri a grace period, but again, it better get sorted out in the next month. Things get really challenging in October.

Marco Giampaolo’s men have been a nice surprise. Considering the losses they suffered in the summer mercato (Luis Muriel, Bruno Fernandes, Milan Skriniar, and now Patrick Schick), it would be thought that 3 points from their first two matches would be acceptable. The scoring of old man Fabio Quagliarella has helped them exceed that, and Gianluca Caprari opening the scoring at Fiorentina is encouragement. Not really dominant in either of their matches, the Blucherati found a way to these 6 points. This is a team that has a chance to make a real run for a European place with the way things have started.

Andrea Belotti has already scored the goal of the season in the second match week. I just won’t have the same excitement for any other goal the rest of the way. The defending looks markedly better, thanks to better goal keeping (Sirigu with 1 GA in 2; Joe Hart with 10 GA in 3). The defending seems solid, too. These were areas where the Granata had to get better, and the early returns are positive. If they keep Belotti before the window closes, Torino will remain a dangerous proposition.

Every small club Marco Borriello goes to, he scores goals. If it weren’t for Inter and Sampdoria’s starts, the new boys might be getting more attention. Impressive resolve to regain the three points against Udinese after squandering a 2-0 lead. With this start, SPAL might still be relegation strugglers, but they will be a lot more troublesome to the big boys than anyone had originally imagined.

Simone Inzaghi’s men are unlucky not to be on six points. They did everything but score against SPAL in the opener. Though had it not been for Sergei Milinkovic-Savic, the Biancacelesti could also be sitting on two points. His late goal won it at Chievo. Milinkovic-Savic looks to be taking the reins left by Lucas Biglia and is poised for a breakout season, judging from these first two games. Time will tell if the losses in the summer and lack of activity will take its toll on them.

Roberto Donadoni gets to keep his house in Bologna for another two weeks at least thanks to the Rossoblu’s start to the season. They fought their way to a draw against Torino and did what they had to in their win at Benevento. Finding ways to get points is going to be important, and that is exactly what they are doing. And yet this table position flatters them. Napoli (H), Fiorentina (A), and Inter (H) are next. Yeesh.

The Chievo games are going to have potential to be the most fun to watch. They have promising attackers like Roberto Inglese, Valter Birsa, Manuel Pucciarelli, and Lucas Castro. The problem is they are relying on veteran defenders and a goalkeeper who are past it. Every game involving Chievo could have at least three goals, and who scores them will be interesting.

Only the most diehard Roma fan would have expected 6 points from Atalanta (A) and Inter (H). They gutted out a win at Atalanta, but followed up by self-destructing at home against Inter with the same mentality that seems to always inhibit them. Sure, they deserved a penalty when 1-0 up, but good teams overcome bad refereeing decisions. They’re away to an improving Sampdoria side next, and this could be a trap, with a Champions League date with Atletico Madrid looming soon afterwards. It will be very interesting to see how Eusebio Di Francesco manages a challenging situation so early into his reign.

Eusebio Di Francesco feels if there was one team that deserved to win, it was #ASRoma https://t.co/bYKGI2OrrW #FCIM #RomaInter #SerieA pic.twitter.com/vjE1ft7Sa3

The goalless draw at Sassuolo to start the season suddenly doesn’t look as impressive. At home against Juventus, the two goal lead to start ended up being akin to poking a hornet’s nest with a stick. For a side that should be improved, given the first two fixtures there is no shame in just getting one point. The Grifone are a veteran side that won’t be as bad defensively as they were against Juve. Udinese (A) after the break followed by back to back home dates with Lazio and Chievo will give us a better idea of who they are.

The promoted team that I thought was best equipped to survive a quick drop has not necessarily inspired confidence with me. Failing to score away to a Crotone who were without their best defender is a problem. Fine, they weren’t going to beat Napoli, but they’re good enough to be on three points after these first two games. The collection of veterans better take advantage of the international break to sort things out; their next five matches are Fiorentina (H), Roma (A), Sampdoria (H), Lazio (H), Torino (A).

While I’m critical of Hellas Verona, I’ll applaud Crotone for the hard-earned point. This team misses Diego Falcinelli, and really need to figure out how to replace his output from last season. Losing to Milan while down to ten men is excusable. Davide Nicola will have his team organized, but again, they need to find a goalscorer in their ranks.

On the one hand, you can say this is the product of a team getting used to a new manager and his tactics. To me though, there is no excuse to be goalless through the first two games against teams that boasted two of the worst defenses last season (Genoa and Torino). The goals will eventually come, but you would think that the trio of Matteo Politano, Diego Falcinelli and Domenico Berardi would at least have one goal among them after 180 minutes.

If the Chievo games aren’t the most entertaining, then Udinese will be the place to go. The defense is retooled, and while Simone Scuffet is a good goalkeeper, it will take some time for this defense to understand one another. Cyril Thereau is scoring which is a good sign, and they can get goals from other places. Again, there’ll be a lot of goals in their games, especially with Genoa (H), Milan (A), Torino (H), and Roma (A) coming up.

Benevento supporters can already start planning for life back in Serie B next season. Failing to get anything at Sampdoria with a one-goal lead, followed by a listless effort at home to fellow strugglers Bologna. Not a recipe for a team that can survive. As the season goes on, it will be more and more evident that Benevento are simply out of their depth.

I’d like to know who the Atalanta brass upset at Serie A to open the season with Roma at home and Napoli away. There’s no shame, really, in being on 0 points after those two games. However, the losses in the summer weren’t that impactful, and surely Gasperini’s men could’ve gotten a point out of one of these games. Maybe this team needed to take a step back before taking another step forward. After the break, they get Sassuolo at home. Fail to win, and you could probably push the panic button.

About the only positives a Cagliari fan can take is that Juventus (A) and Milan (A) are now in the past. They were far more inspiring at the San Siro, but it’s a question of whether that’s down to their improvement, or if they were taking advantage of a (currently) disjointed Milan side. Remember the name Nicolo Barella — the 20 year old was everywhere in the match against Milan. The attack has some nice pieces, and now it looks like they’ll count on Leonardo Pavoletti to be their new Borriello.

It’s easy and obvious for me to say that this is the lowest that Fiorentina are going to be at any point of the season… because they’re 20th. So it can’t get any worse. The new-look attack of Federico Chiesa, Giovanni Simeone, and Valentin Eysseric did show some promise in the loss at home to Sampdoria, a game that they won big on the stats board, but lost on the scoreboard. Consider that a positive step in the development of this team. Six points in their next two are a near-must with Verona (A) and Bologna (H) before they take a trip to Juventus.