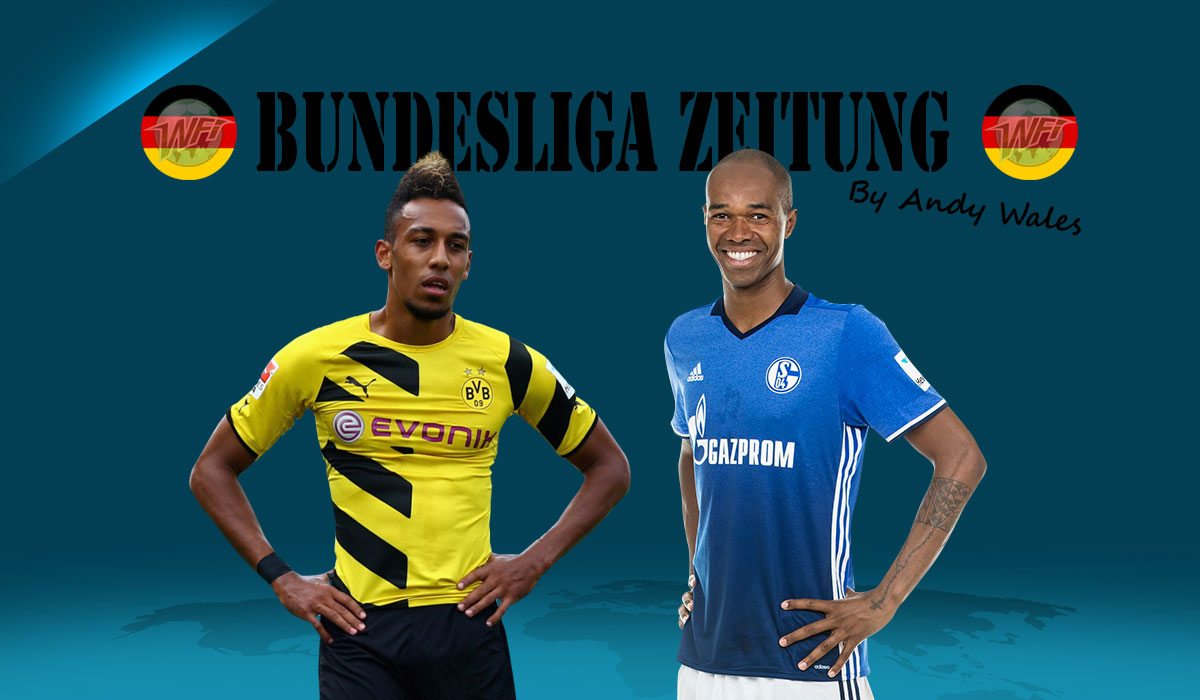 Last week, I described the Revierderby as “a match you cannot afford to miss”. On reflection, I think perhaps I understated it. In fact, it’s going to take something special to beat it for game of the season, writes Andy Wales.

Pre match, the focus was on the contrasting form of the two protagonists; Schalke riding high and hosts Dortmund in the doldrums.

Within 25 minutes, the world was turned on its head as a highly motivated Dortmund swarmed their opponents to take a 4-0 lead. It had Schalke looking bewildered and bedraggled, but the famed ‘Südtribüne’ in jubilation.

There were only 13 minutes between Pierre-Emerick Aubameyang giving Dortmund the lead and Raphael Guerreiro scoring the fourth. An aghast Domenico Tedesco was forced to drastically change whatever gameplan he had, and the Schalke coach made two substitutions just after the half mark.

In typical derby style, the Dortmund fans were taunting their rivals with their own club’s name “Schalke 04”.

At half time, I posed the question on social media if Schalke could launch a comeback in the second half or if it would be damage limitation. This was more a case of playing devil’s advocate than of any reasonable expectation.

With @BVB leading 4-0 at half time, can @s04_en launch a comeback in the second half or will it be damage limitation?#Revierderby

Cue another substitution during the break from Tedesco, a Schalke goal correctly ruled out by VAR early in the second half and the mood began to change. The momentum of the match had switched and there was a sense of inevitability about Guido Burgstaller reducing the deficit.

Substitute Amine Harrit further reduced the arrears a few minutes later and jubilation was being replaced with an increasing sense of anxiety. A second yellow card for Aubameyang left the hosts a man down and a late Daniel Caligiuri goal saw panic begin to set in as the impossible was by now looking probable.

It was now Dortmund’s turn to look bedraggled as they desperately tried to hang on to what had once looked an unassailable lead, but late into added on time came the dramatic equaliser that sent emotions over the edge.

Tempers frayed between players at the final whistle and the Dortmund fans made their feelings clear at the capitulation they’d just witnessed.

In a topsy-turvy day of emotions, Tedesco went into the match being lauded, whilst Peter Bosz was under scrutiny. At half time, it was Bosz on a high and Tedesco searching for answers.

By the final whistle, things had turned full circle once more as Tedesco and his team celebrated a point that looked unimaginable just 45 minutes previous. Meanwhile, the pressure that had relieved itself somewhat from Peter Bosz was back and weighing heavier than ever.

A draw that felt like a defeat for Dortmund on the back of an awful run of form, that now reads just one win in ten, is looking likely to end in ignominious fashion for the former Ajax coach. Dortmund CEO Hans-Joachim Watzke has come out to publicly support his coach, but that support will be difficult to sustain if this run of form continues.

To put the result into context, it was the first time in 41 years that a team has recovered from a four goal deficit in the Bundesliga.

For Tedesco, it is another positive mark on a career still in its infancy. So, Tedesco continues to expand his group of admirers and Schalke maintain their healthy position in the league, but this side still have some way to go before they can realistically be considered trophy contenders.

For all that Schalke have improved and look more solid under the smart Tedesco, their vulnerabilities would still be exposed in the Champions League. Schalke fans should rightly not be too concerned about that at this stage though because with good tactics, coaching and astute work in the transfer market, their progress can steadily continue to progress.

It should be noted that Schalke are not the only side taking advantage of Dortmund’s woes because Borussia Monchengladbach pulled off an unlikely 2-1 win over Bayern München and lift themselves into the top four.

The landscape of the Bundesliga is changing and at Borussia Dortmund, it may be changing again in the near future. The eyes of the world will be upon them as they travel to Leverkusen, where anything but victory on Saturday afternoon could see Bosz taking an early winter break.

Loading...
Newer Post
Is it Time for Tottenham to give Christian Eriksen a break?
Older Post
Bill Shankly’s ‘Forgotten’ Barren Period 1966-1973 and Criticisms of his Tenure