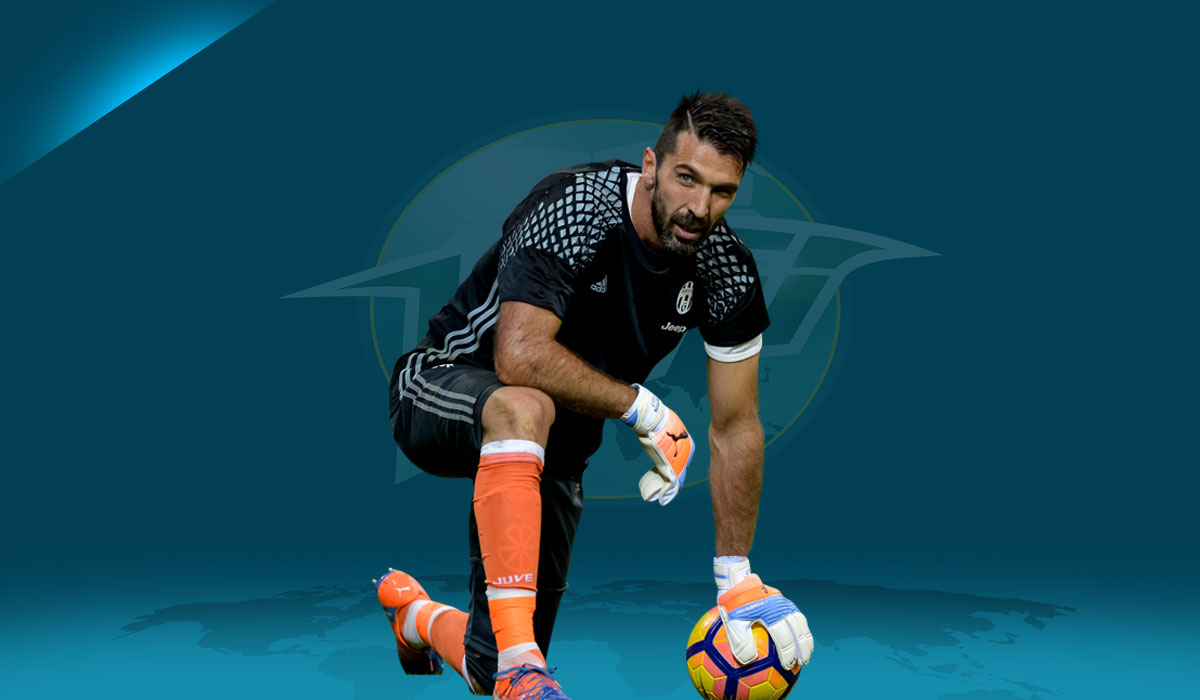 It’s easy to forget just how long Gianluigi Buffon has played a part in the footballing world. A ten-time Goalkeeper of the Year became known in Italy as Superman; when you take a look back over the previous 22 years, it’s not hard to see why, writes Graeme Scott.

Going on to become No 1 for both Italy and Juventus, amassing over 1,000 competitive matches and collecting 21 trophies along the way, Buffon is rightfully considered as one of the greatest goalkeepers to ever grace the sport.

Although the name Parma might not mean much to fans outside of Italy today, back in the mid-to-late 90’s it was a different story. Containing such names as Hernan Crespo, Enrico Chiesa, Lillian Thuram and Fabio Cannavaro, it tells you just how good this side really was. On November 19th 1995, a 17-year-old Gianluigi Buffon made his arrival to Italian football against AC Milan.

“I turned to Alessandro Melli and said, ‘I hope Milan get a penalty so I can save it’,” Buffon noted. There would be no penalty, but there would be a clean sheet for the youngster as the match ended 0-0.

“Buffon was Parma’s best player. His timing when he came off his line was excellent and his save against Simone was great. It’s unusual to see a 17-year-old who is so brave and determined.” said then Milan manager Fabio Capello.

With Buffon in goal, Parma would go on to enjoy their most successful period as a club, winning a UEFA Cup, Coppa Italia, and achieving the club’s best ever finish in Serie A, just two points behind winners Juventus in the 1996/97 season.

After six seasons with the Gialloblù, Juventus would come calling in 2001. They signed Buffon for 100 billion lire – around fifty million Euros in today’s money – making Buffon the most expensive goalkeeper in football, a transfer record that remains intact (depending on the currency) even in today’s crazy transfer market.

“It was a big satisfaction for me,” Buffon said.

“I really didn’t have any problems with it at all. In that sort of transfer market, I was seen as… we could say a phenomenon of sorts, but that was down to the price tag more than anything else.”

Immediately becoming Juventus number one in the first team, Buffon made his debut for Juventus just as he had several years earlier for Parma by keeping a clean sheet in a 4-0 win against Verona. Buffon wouldn’t have long to wait to achieve success in Serie A for the first time as Juventus ended the season as league champions, no doubt helped by their new goalkeeper, who conceded just 23 goals in 34 league matches.

The following season Buffon would have the opportunity to go one better by achieving success on the European stage. Juventus would reach the Champions League final on the back of an impressive run that had seen the Old Lady eliminate Spanish giants Barcelona, and most memorably Real Madrid in a semi-final that saw Buffon keep the dream alive by denying Luis Figo from the penalty spot.

The final against AC Milan itself would not end as well for Juventus and Buffon — despite his best efforts, he could not prevent Milan from winning on penalties.

Buffon, like Superman, would reveal that even he is not invincible.

“From December 2003 until June 2004 I was suffering from depression,” said Buffon when asked on the subject.

“Who knew about it? I knew about it and had to keep it to myself, because at the beginning I didn’t really have the opportunities to be open about it.”

Later reflecting on those dark periods, he added: “I began to understand I had a problem and that it was something that could be cured. I didn’t take a break because I felt a responsibility to my team and to people who relied on me. I had a European Championship to play in.”

Thankfully Buffon would not face his depression alone, confiding in friends, family and a psychologist. Over six months later, the darkness that had taken hold of Buffon was suddenly gone.

“It happened all of a sudden, where I used to be scared of going to [the pitch]. At the European Championships in Portugal during the match between Italy and Denmark, a horrendous match, I was the only one smiling.”

As the national side travelled to Germany for the World Cup in 2006, things were beginning to unravel back in Italy as what became known as the Calciopoli scandal engulfed a nation — a scandal that involved Juventus, AC Milan, Lazio and Fiorentina at centre of match-fixing allegations.

“We certainly arrived at the World Cup in Germany as the centre of attention and with the conviction that – in what was a delicate moment – we had to do something big on the pitch to respond to everything that had been going on,” Buffon said.

Throughout the tournament, the goalkeeper – along with most of his Italian teammates – played the games under a cloud of uncertainty, as the outcome of Calciopoli could mean that certain players would be looking for a new club.

Despite this, a determined Italy would reach the final against France, a match most known for the infamous moment Zinedine Zidane ended his playing career with a headbutt on Italian defender Marco Materazzi.

The match ended in penalties after 90 minutes plus extra time couldn’t separate the two sides, during which Buffon made a terrific save from what looked like a certain goal from a Zidane header. Italy went on to win 5-3 on penalties, in what was no doubt the highlight of Buffon’s international career.

“It was a dream come true, it would be for any player. I still feel very fortunate. It was just a feeling of immense joy especially in making a whole country happy.”

Standing by his Lady

On the 14th of July 2006, just five days after becoming a world champion with Italy, Buffon along with Juventus were sent down to Serie B as part of the punishments handed out for their part in the Calciopoli scandal that rocked Italian football.

Fans feared the worst as several big names such as Fabio Cannavaro and Zlatan Ibrahimovic chose to play elsewhere rather than spend a season out of top flight football.

As well as being demoted, Juventus would have their 2004/05 and 2005/06 titles stripped and start the season with a seventeen point deduction. Buffon, however, remained with the Old Lady to face the tough season ahead. It was a choice that Juventus fans will never forget.

“Playing in Serie B wasn’t a logical choice, but it was one of those made by the heart,” Buffon later remarked.

“Probably it wasn’t the normal thing to do, but in the end it was a simple choice for me. If Juve had to go down to B then I had to go with them. I didn’t really need to think about it. Juve helped me become a world champion and therefore I owed them a huge debt.”

Juventus would quickly bounce back into Serie A by ending their sole season in Serie B as champions. Though it is a period fans and players alike still look back on with mixed emotions.

“I have six Scudetti in a row, but also 10 in my career [including the two revoked in the Calciopoli scandal],” said Buffon as he reflected this year after recently winning a 6th Serie A title in a row.

“Yes, 10. I’m not ashamed to say that. I won them all, on the pitch, next to the champions whose faces, fatigue and smiles I can see as I write. The FIGC, Wikipedia or the Lega [Serie A] say there are eight. I won’t discuss referees, judges or laws, but no-one can deny me the right to feel all of them.”

From Serie B to Berlin

Although Juventus returned to Serie A immediately, it would take time to rebuild a side capable of performing to the previous standards. Despite Buffon himself still being regarded as one of the best in his position, his club were far away from such debates.

It wasn’t until 2011 that Juventus would return to winning ways, a whole five years after the club’s demotion. From then on, Juventus won the first of what would become six Serie A victories in a row between 2011 and 2016, a league record. Buffon would be the club captain for five of those triumphs, taking over from another club legend as he departed for Australia, Alessandro Del Piero.

The question of who should wear the captain’s armband was never in doubt.

“Buffon, for us, is the captain. He is the player with the most experience and we are lucky to have the man who I believe is the best goalkeeper of all time defending our goal,” said Juve defender Giorgio Chiellini, adding: “It is extremely reassuring having him in goal.”

On the 6th of June 2015, Buffon returned to the theatre of his World Cup triumph, Berlin, after again performing highlight-calibre saves on the road to the Champions League final, once again denying Real Madrid with vital saves in the semi-finals as he had done back in 2003. Juventus faced Barcelona in the match to decide who would become champions of Europe.

Unfortunately, also like 2003, the one trophy that Buffon desires to add to his impressive list of accomplishments continued to avoid him, as Juventus fell to a 3-1 defeat.

Despite having a career decorated in trophies, records and individual awards, the Champions League is one trophy missing from Buffon’s glorious career. It is the one remaining accolade that the 39-year-old goalkeeper wants to lift most, even after three failed attempts, most recently last season’s campaign which saw Juventus go 600 minutes without conceding a goal before finishing runners up to Real Madrid in Cardiff.

It may well be the one trophy Juventus fans desperately want to see their club win even more than usual this season, as, during an acceptance speech for being named Best Goalkeeper at the FIFA 2017 football awards, Buffon delivered the inevitable news that he was indeed retiring from football come the end of the season,

“This is my last season and I’m pretty sure of the choices I make,” he said. “One or two more years wouldn’t add or take away from what I’ve already achieved.”

However, during an interview afterwards, Buffon would leave a glimmer of hope for those that want to see the legendary goalkeeper stay around, if only for a little longer.

“It would not change anything to play for one or two more years. It would take nothing or add anything to what I have already done. The only way would be to win the Champions League and, at that point, to try to win the Intercontinental. Maybe (Wojciech) Szczesny could play a game and me another.”

Whether Buffon ends his career with or without a Champions League medal, there is no doubting his place in the history of football, recognised by rivals, teammates and fans alike as a legend of the game.

Buffon has shown that age is indeed just a number, but it is a number that eventually brings even the greatest of careers to an end.