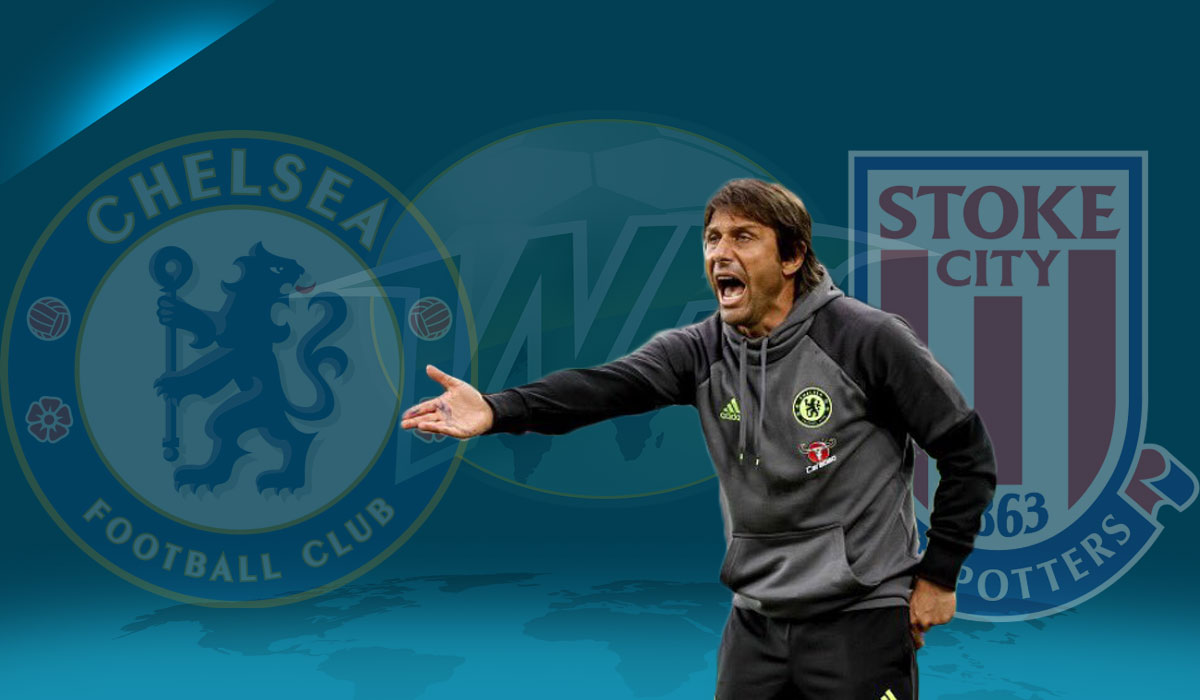 Chelsea host Stoke City in one of six 3 o’clock kick-offs this Saturday. The Blues, who returned to winning ways with a 2-0 victory against Brighton on Boxing Day, also have the opportunity to leapfrog Manchester United into 2nd spot, writes Maryam Naz.

Jose Mourinho’s men dropped two points at home to Sean Dyche’s high-flying Burnley in their previous game, giving them an added incentive to snatch all three points against the Potters.

The fixture will be played at Stamford Bridge, posing an even bigger problem for Mark Hughes’ men as Chelsea have won six Premier League games in a row at home this season, and will want to make it seven when they welcome a struggling Stoke side on Saturday.

Despite being managed by the experienced Hughes, Stoke’s recent performances have been lacklustre. They managed a win against West Bromwich Albion, and saved a point against Huddersfield on Boxing Day when Ramadan Sobhi cancelled out Tom Ince’s opener, but were on the other end of a 3-0 drubbing at the hands of West Ham United just over a week earlier

Their miserly defensive reputation is beginning to falter, despite Hughes doing some good work for the club over the past 3 seasons, and the Bet365 stadium, once an intimidating place to play at, has lost its aura.

Conte’s Chelsea appear in stark comparison to their opponents. Despite being deemed to be out of the title race after the 1-0 defeat to West Ham, recent performances have suggested a resurgence in the squad led by their defenders rather than their attacking players, and it’s at Stamford Bridge where they appear to be at their best.

The key player combination that will cause damage to this struggling Stoke side is the relationship between the two Spaniards, Alvaro Morata and Cesar Azpilicueta. The Spanish defender has linked up many times with his compatriot, and since the start of last season has racked up 10 Premier League assists, more than any other defender.

The pair linked up for the 6th time this season during the 2-0 win against Brighton, allowing Morata to nod in his 12th of the season. Marcos Alonso, another Spaniard, is the leading goal-scorer in the Premier League when it comes to defenders, with 11 goals since last season.

Chelsea’s Spanish defenders have proved to possess attacking prowess and have certainly made a name for themselves. Stoke will need to be wary of them, as they are a vital part of Chelsea’s attack.

Chelsea will most likely play a back five, with Alonso and Victor Moses playing as wing-backs. The midfield three of Cesc Fabregas, N’Golo Kante and Tiemoue Bakayoko will have the license to play freely, causing the Stoke defence havoc by pinging in balls to Eden Hazard, who seems to be at peak efficiency when playing behind Morata.

Darren Fletcher, Joe Allen, and the Stoke midfield will have the arduous task of stemming the Chelsea flow, as well as trying to provide service to the likes of Xherdan Shaqiri. The inclusion of Peter Crouch should provide them with some respite from the likes of Hazard and co. as the long ball up to the Englishman may be a reliable form of escape for the Potters throughout the course of the 90 minutes.

Hughes is in the middle of a defensive crisis which will only add to his problems. He is without Ryan Shawcross who limped off during that Boxing Day draw against Huddersfield, while Kurt Zouma, who has been a pivotal feature in his defence, will be unavailable to play against his parent club. The Potters will also be without Bruno Martins Indi.

With so many of their defenders injured or unable to play, one can only see Stoke failing against this empowered Chelsea side featuring the likes of Hazard, Morata and Fabregas.

Conte has all his valuable players available and on form, with the only potential change being the return of Andreas Christensen, providing him with more options at the back to both solidify his defence and terrorise Stoke’s. His side have been so reliable of late, that they haven’t missed David Luiz, who has been sidelined since late November with a knee injury.

Conte will have one eye on their next game — a pivotal one against Arsene Wenger’s Arsenal — and will want to rotate his squad to ensure that his prized assets are fit for it.

Morata is one yellow card away from missing the game against the Gunners, so Conte will want a disciplined performance from him and his players against Hughes’ men.

His players will be expected to win and win handsomely against this unconvincing Stoke side, who arrive at Stamford Bridge boasting the second worst away defensive record in the league.

The odds do not seem to be in the Potters’ favour, and Hughes may just be facing another potential away defeat come New Year’s Eve.