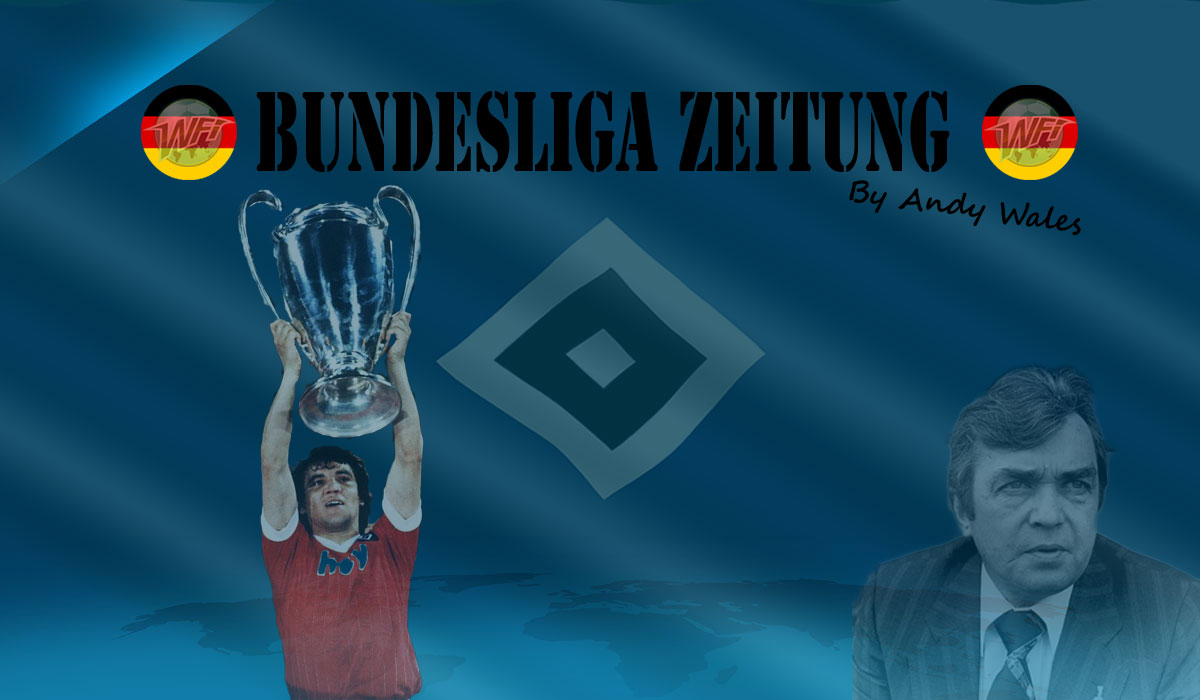 Whilst the race for European spots has dominated attention, this past weekend saw drama at the other end of the Bundesliga between two traditionally big clubs with rich histories, writes Andy Wales.

It was way back in 1977 that Kevin Keegan made the high profile and eye-catching move from reigning European champions Liverpool to Hamburger SV.

At the time, despite winning the European Cup-Winners Cup, Hamburg were not a major force. However, with twice European footballer of the year Keegan in their ranks, Hamburg won the Bundesliga in 1979, 1982 and 1983.

In between those wins, and the year after, they were runners up. On top of this, they lost in the 1980 European Cup final to Nottingham Forest, before going on to win the competition in 1983, under the guidance of Ernst Happel.

It was the club’s golden age, an incredible period of success, but no more.

The trophies have long since dried up and the wins have dried up too. What hasn’t, is the number of head coaches; four permanent bosses have been sacked in the past four years. In fact, current head coach Bernd Hollerbach is the eleventh permanent appointment in the past ten years, and that does not include the five caretaker bosses in that time.

The lack of stability represents the club’s desperate attempts to recreate the magic. Instead, they have fallen into a perennial battle of constant struggle. Now they find themselves looking at the very real prospect of falling out of the Bundesliga.

Hamburg famously have a clock at their Volksparkstadion showing their time in the Bundesliga, proud of the fact they have never been relegated. Though their time in the top league does appear to be running out.

Saturday evening saw Hamburg make the short trip to local rivals Werder Bremen for the Nordderby, as it’s known in Germany. 30 years ago, this was a significant date in the diary for the Bundesliga. Hamburg were still considered contenders and Bremen were winning trophies under the guidance of Otto Rehhagel and the goals of Karl-Heinz Riedle.

Now, sadly, it’s a battle between relegation candidates rather than trophy contenders.

For the fans, of course, it’s still huge, and the atmosphere at the Weser-Stadion on Saturday was testament to that. On the pitch, it was a scrappy affair which was perhaps understandable given what was at stake and the predicament both sides were in.

Bremen had won two and drawn two of their six Bundesliga games since the return from the winter break. It saw them move out of the relegation zone and their rivals Hamburg replace them there. As the cliché goes, this was a must win game for the visitors.

In the end, neither side truly did enough to warrant the win, but with just a few minutes remaining, Bremen broke the deadlock, with the goal officially credited as an own goal to Hamburg’s van Drongelen.

To the naked eye, it appeared there was a suspicion of offside as Aron Johannson played the ball goal wards and the replays confirmed that Ishak Belfodil was marginally ahead of the ball, and offside before he helped the ball be forced over the line. It was a tight call, but that is what the VAR is for here in the Bundesliga.

However, despite the protests of the Hamburg players and the replays available to television viewers, The VAR either never came, or simply ignored the incident.

🗯 Andre Hahn after #SVWHSV: "We fought for 86 minutes and gave our all. The manner and the time in which we conceded is obviously extremely tough to take. In my eyes it was offside and shouldn't have counted." pic.twitter.com/78GFyecDgY

With Mainz and Wolfsburg, who occupy the two spots between Bremen and Hamburg, drawing on Friday night, we are now looking at a sizeable gap becoming insurmountable.

Right now, Köln remain bottom of the Bundesliga, but only on goal difference.

Their unlikely win away to RB Leipzig will give them a glimmer of hope that was unthinkable before Christmas. However, whilst them overtaking Hamburg looks inevitable, overturning the seven point gap to Mainz is a tall order.

The key difference between Köln and Hamburg though is that Köln retain hope because they can at least win matches.

As Bundesliga journalist Jonathan Harding commented on twitter, it’s time we get used to a Bundesliga without Köln and HSV. Despite their tradition and support, they’re just not good enough. Sad, though that is, it’s true.

Time we got used to Bundesliga life ohne Cologne & HSV.

This weekend could prove to be a defining one at the bottom of the table. Hamburg play host to fellow strugglers Mainz, where nothing else but a win for HSV will do.

A win for Mainz would not only leave Hamburg staring down the barrel of relegation, but would also see Köln a long way adrift of safety.

At both ends of the Bundesliga, the drama continues.