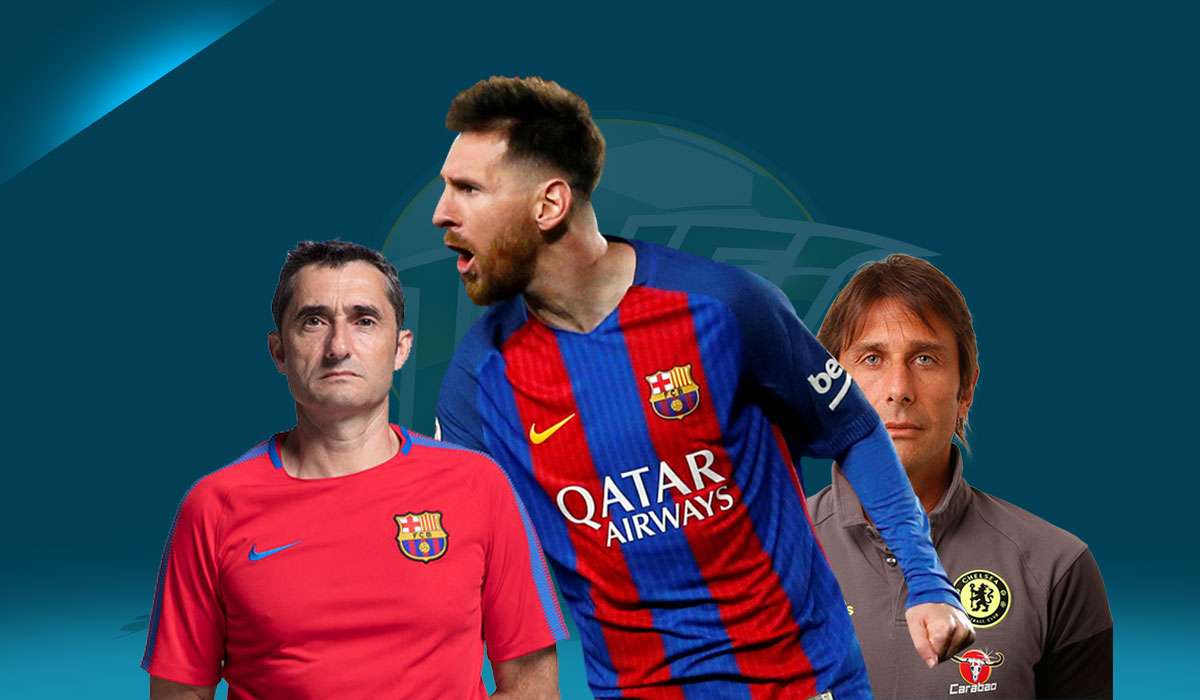 From trouble to treble, by Mudassir Mustafa.

Cast one’s mind back to the start of the season when Real Madrid trashed Barcelona 5-1 in the Supercopa de España and everyone seemed duly alarmed, especially Gerard Pique.

Barcelona were in crisis, or so it appeared after the dreadful summer. Yet, there they are in their fourth Copa del Rey final in a row, top of the league, 10 points ahead of nearest challenger Atletico Madrid, and 14 ahead of their great rivals, Real Madrid. They also have a good chance of pregressing in the Champions League as they return to Camp Nou following a 1-1 draw against Chelsea at Stamford Bridge.

There are two types of teams in the world of football when it comes to winning; good teams and great teams. One can spend hours in differentiating between the two but an ingenious answer would be very simple, yet precise.

There is, was, no comparison to Pep Guardiola’s Barcelona – perhaps there never will be. Pep, an exorbitantly demanding manager, revolutionised football in Spain, Germany, and is now doing so in England.

He is the perfect embodiment of a tactical genius – committing to win with style — with a style — while also denying the narrative ‘style over substance’ as he seeks both.

Antonio Conte lived every moment of Chelsea vs. Barcelona like a fan…

A lot has changed since Barcelona last visited Stamford Bridge. It was nearly a decade ago, nine years to be precise. The famous treble-winning side had a few survivers when they visited London the past week; Lionel Messi, Gerard Pique, Sergio Busquets and Andreas Iniesta – who scored the famous goals in front of the blues to win the tie.

24-year-old Iniesta stole the show that night as he ran to the corner post with his shirt off, swirling it around before being jumped upon by a plethora of teammates and technical staff.

Pure euphoria. nine years later, 33-year-old Iniesta — who revitalised his form under Valverde — stole the misplaced pass by Andreas Christensen before passing it to the footballing God among humans, Lionel Messi, who made it 1-1.

A narrative that football likes to weave is that the scoreline never tells the whole story. It was a tactical masterclass by Antonio Conte against the managerial ingenuity of Ernesto Valverde — two men completely opposite to each other, in style, tactics, and class.

Chelsea dominated the game. It could have been 3-1, it should have been 3-1, but the footballing gods weren’t in the mood to let Willian have his hat-trick. He was blessed with only one goal, and two marvellous strikes rebounded off the posts, left and right.

Barcelona were dominating possession but there was no breakthrough. Hardly any vertical passes, and only six key passes during the whole 90 minutes – their lowest tally against any opposition. It looked like Conte had it all figured out since the inception of this draw.

And then, one mistake, a concentration drop, one player: Messi.

At some point, Conte would have realised that there are no tactics to beat the genius of that man.

This is not the Barcelona of past. As said by Guillem Balague “this is the worst Barca side of the decade.” Concur or not, it’s subjective.

Not fully surprising #FCB have been KOd in quarters of the CL in last two seasons. They have progressively been losing quality. This perhaps the worst FCB in a decade. Lack quality from the midfield on. Their competitiveness keeps them alive (was about to text b4 deserved goal)

The story of Barcelona is unprecedented. They are lacking quality but they are getting better at winning. An emphatic win over Girona saw them go 32 league games without tasting a defeat, 25 of them this season. Another record fell at Valverde’s feet.

The debate of style is swept under the rug by overwhelming success. Messi scored an inevitable first goal against the Blues. Valverde is not Pep; neither his side is the same as Pep’s was. But his ability to stay calm and poised has done wonders so far. Barcelona will face Las Palmas, Atlético Madrid, and Malaga before hosting Chelsea for the second leg of last-sixteen tie.

Chelsea’s loss to Manchester United tells the same story, more or less. They create good chances, get a goal or two, and then sit back – allowing too much time for the opposition to grow into the match.

Will Conte opt for a different tactical approach or will he stick to the same plan? The real question is, will either of them make a difference against Barcelona and Messi?