Belgian football enjoyed its best period during the early and mid-eighties under the guidance of Guy Thys.

They started the decade by reaching the final of the European Championships where they lost to an 88th minute goal from West Germany.

They got over the pain of that defeat to qualify for the 1982 World Cup in Spain where they defeated World Champions Argentina in the opening game of the tournament. A match famous for this photo more than anything else: 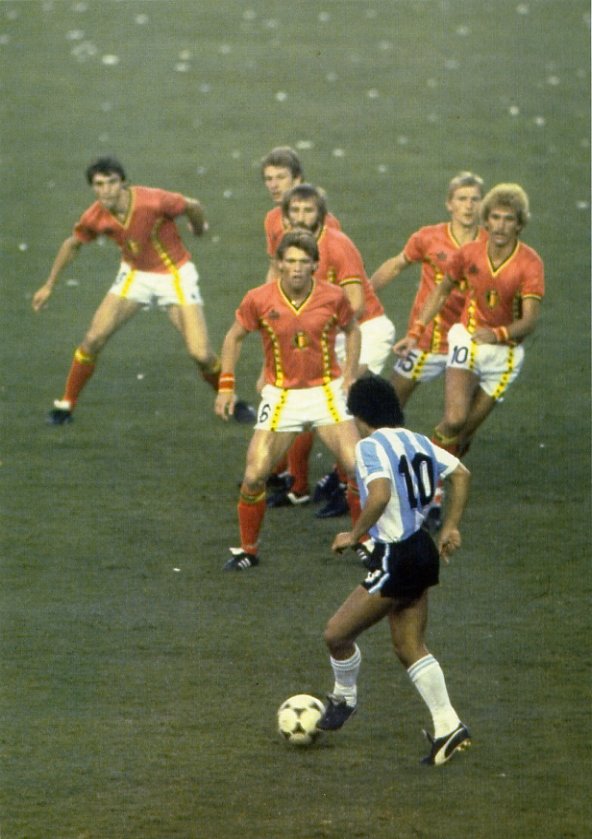 Belgium qualified for the second group stage but were beaten and outplayed by Poland and the USSR.

They narrowly missed out on making the semi-finals of Euro ’84, but they did make it to Mexico ’86 — and in dramatic fashion too.

On a freezing cold autumn night in 1985, Belgium travelled to Rotterdam to play arch rivals Netherlands in the second leg of a play-off to determine who reached the World Cup the following year.

Belgium led 1-0 from the first leg, a controversial game where Netherlands were reduced to 10 men early on after some gamesmanship from Franky Vercauteren earned Dutch forward Wim Kieft a red card.

Vercauteren consequently scored the winner and Belgium had a lead to protect in the away leg.

In Rotterdam the game appeared to be slipping away from the Belgians as they found themselves two goals down with just five minutes left.

Belgium only needed a goal to go through on away goals though and when Eric Gerets hooked a ball into the area for the towering Georges Grun to head home – they had done it.

The goal is the most loved in Belgium football history, it was the day they silenced their noisy neighbours.

By the summer of 1986 Belgium’s squad was experienced and had some promising talent too — including a twenty-year-old born to Italian parents, his name was Enzo Scifo. Scifo was an attacking midfielder with a cracking shot and eye for a killer pass.

After Belgium lost their opening game to Mexico, it was Scifo who set them on the path to victory in their next game against Iraq by opening the scoring with superb drive into the bottom corner from the edge of the box.

A 2-2 draw against Paraguay was enough to send them through to the knock out stages where they faced an impressive looking USSR.

Belgium fell behind to a stunning shot from Igor Belanov in the 27th minute and the Soviets continued to control the game. Belgium were well-organised and physical, making sure the Soviets didn’t get away from them.

The Belgians were struggling to create however, their counter attacking wasn’t working and they barely had a look in as the hour marked approached.

USSR took the lead again through Belanov, but Belgium pegged them back once more to send the game into extra-time.

Belgium proved to be the fitter of the two sides in the extra thirty minutes and they established a two goal advantage. Although Belanov would complete his hat-trick it wasn’t enough for the Soviets.

Belgium again showed fighting spirit in the quarter finals were they hung on for a 1-1 draw to beat Spain on penalties to set up a semi-final against an Argentina. They were undone by the inspired Diego Maradona.

They lost 4-2 AET to France in the playoff for third place.