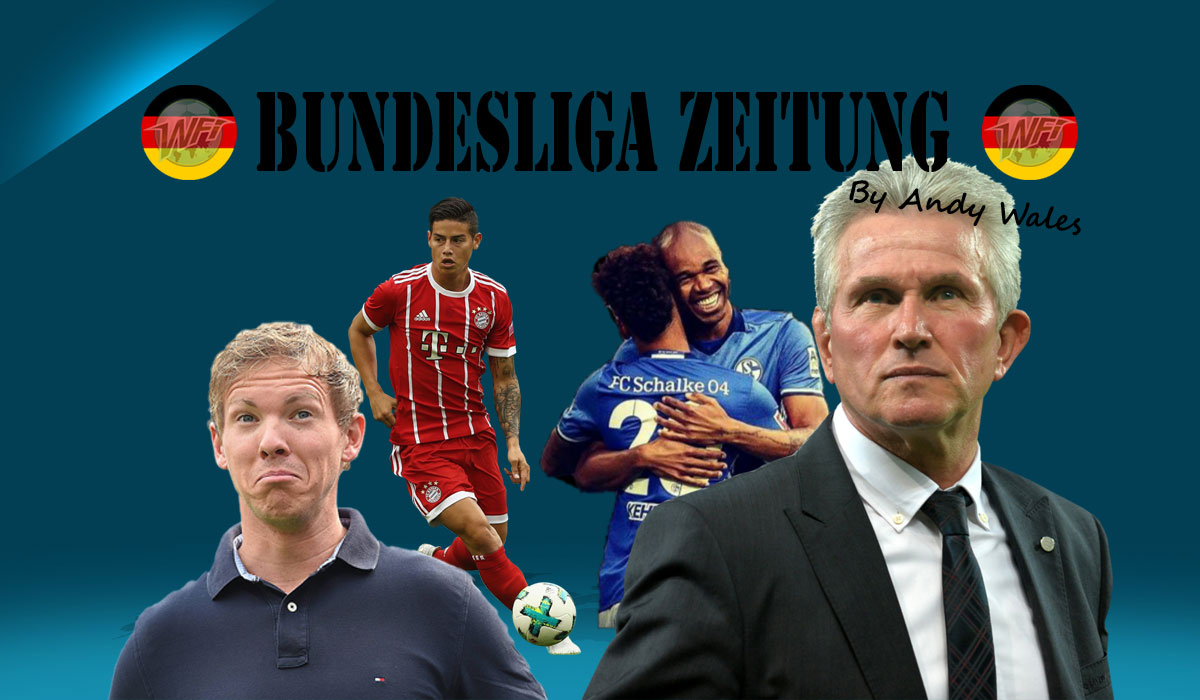 And just like that, it’s done. Another Bundesliga season is over and it’s been predictable, yet unpredictable, but all the while intriguing.

As just about everyone expected, Bayern were again crowned champions, but it was not without turbulence. Carlo Ancelotti paid the price for some poor early season form as the club was becoming fractured, and threatening to lose its grip on the title and possibly face early exit from Europe.

Julian Nagelsmann and Thomas Tuchel were heavily linked with taking over, but instead, the club surprised us all by talking the legendary Jupp Heynckes out of retirement.

Heynckes famously delivered the treble before retiring and although he was able to galvanise Bayern and deliver the Bundesliga title at a canter, he was unable to get them beyond the semi-final of the Champions League.

Once again, they fell victim to Real Madrid and if they are to progress that next step further next year, then the beginning of an evolution of the squad will be part of the task facing new boss Niko Kovac when he takes over.

Thankfully, not everything was as predictable as the title heading to the Allianz Arena. Indeed, the final day was one of drama and emotion, as the final relegation and European places were decided, not to mention fates.

For Bayer Leverkusen in fifth place, they knew they had to beat Hannover and hope for a favourable score line in Hoffenheim. It’s been a very encouraging season for Leverkusen with a number of promising young talents coming to the fore, helping them to exceed all expectations this term.

To their credit, Leverkusen held up their end of the bargain and raced into a two-goal lead. Meanwhile, over at the Rhein-Nacker Arena, Hoffenheim had capitalised on another Roman Bürki calamity to put their noses in front against Dortmund.

The live table had Dortmund in third, but only on goal difference and with Leverkusen breathing down the neck of Hoffenheim, a third goal for Die Werkself made it all the more exciting. Cue a Marco Reus equaliser for Dortmund and suddenly it was Hoffenheim missing out on Champions League next year.

However, within five minutes fortunes switched once more, as Hoffenheim re-took the lead and even extended it shortly after. Now, it was Dortmund looking nervously over their shoulder with Leverkusen just one adrift on the goal difference.

Injury time saw Dortmund desperately and unsuccessfully searching for a goal, but ultimately it was not needed. Two injury time strikes for Hannover meant that Leverkusen’s faint hopes were dashed and Dortmund had managed to cling on to fourth place by goal difference.

It means whilst Nagelsmann defied the odds to guide Hoffenheim back into Europe’s premier club competition and Dortmund also claimed their place in it. Leverkusen must make do with the Europa League. They will be joined in it by RB Leipzig, albeit only the qualifying round.

Leipzig impressively hit Hertha Berlin for six, to hold off the challenge of Eintracht Frankfurt and Stuttgart, who finished the season by beating Bayern 4-1 at the Allianz. Not something you see very often.

Despite securing Champions League football for next season, Peter Stöger’s short reign at Dortmund is over. He announced after the 3-1 defeat to Hoffenheim that he is departing the club, after taking over from the sacked Peter Bosz. Although he helped stemmed the flow of an extremely porous defence, Stöger struggled to inspire the type of free-flowing attacking football that the Westfalen had become accustomed to.

A humiliating exit in Europe, elimination from the DFB Pokal, limp defeat in the Revierderby and a six goal humbling to Bayern have all contributed to Dortmund looking elsewhere for this summer and beyond.

Stöger’s former club, Köln, had already receive their fate, but if they could beat Wolfsburg and Hamburg win at home to Borussia Mönchengladbach, then the impossible escape for HSV would be on.

Wolfsburg demonstrated their awareness of the enormity of the situation facing them by taking a first minute lead. It meant Wolfsburg remained masters of their own destiny and even though Hamburg did all they could by beating Gladbach, it was all in vain as Wolfsburg shrugged off a Köln equaliser to run out 4-1 victors.

The well known and much talked about clock at the Volksparkstadion must now be set to zero. For the first time in Bundesliga history, Hamburger SV have been relegated. This proud and historical club must now lick its wounds and rebuild.

Their luck ran out and rather than perennially cling to survival, they can now start afresh, something the club has probably needed to do for nearly a decade. Sad though it is for such a traditionally big club to fall from grace in the manner it has, it may prove to be a blessing in disguise.

Taking the place of Hamburg and Köln will be recently relegated Nürnburg and Fortuna Düsseldorf. Wolfsburg now face Holstein Kiel in the relegation play off – a tie that usually ends in the 1. Bundesliga side maintaining their status.

And so that was it, a season of departures in the high profile sackings of Ancelotti and Bosz at the Bundesliga’s two biggest clubs; Stefan Kiessling calling it a day after a long and fruitful career at Bayer Leverkusen, and star names such as Pierre-Emerick Aubameyang and Naby Keita making their way to the Premier League.

But also, the departure of two traditional clubs with large and passionate following in Hamburg and Köln.

It was a season of new beginnings in the shape of inexperienced coach Domenico Tedesco announcing himself by guiding Schalke to an unlikely second place finish.

Leon Bailey and Kai Havertz bursting onto the scene at Leverkusen and spearheading their resurgence. Jadon Sancho joining Christian Pulisic as Dortmund’s hope for the future. Weston McKennie and Amine Harit will maybe help Schalke fans forget the departures of Leon Goretzka and Max Meyer.

Another new beginning came in the form of James Rodriguez. The Colombian eventually finding his feet at Bayern and rediscovering the form and confidence that made him a star at the World Cup in 2014.

In addition, we had returns; Marco Reus regained fitness, form and the goal-den touch ahead of this summer’s World Cup. Hopefully, he gets a belated opportunity to show off his supreme talent for Die Mannschaft.

Of course, the biggest return was that of Heynckes. It was probably the most unlikely too and brought with it glory and a reminder that class never fades.

For all its ups and downs, I hope you’ve enjoyed the journey through this Bundesliga season with me, and share my hope and optimism that the Bundesliga still has much to offer.