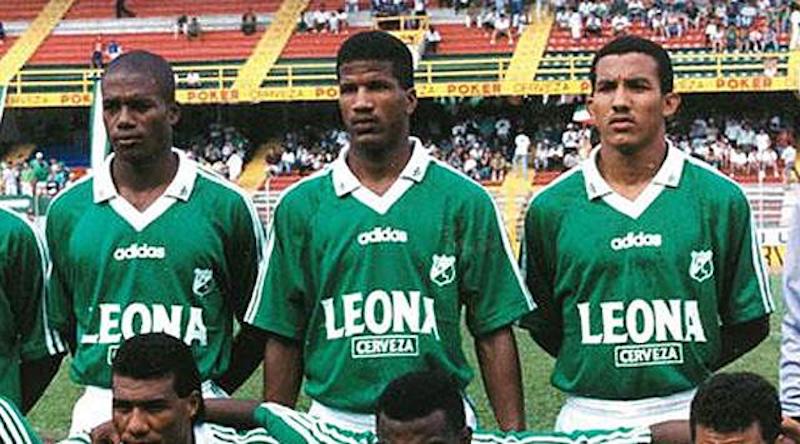 He tells us how his time in the north-east of England gave him goosebumps and how he’s proud of his journeyman status, as it helped other Colombian footballers take their game to a global stage.

I am from Quibdo in Choco – the same region as Jackson Martinez, Wason Renteria, Carlos Sanchez.

I was born in 1974, and when I was young my influences were my brother, playing in the neighbourhood, Gorgonio Chaverra, Higinio Serna, Profesor Pomponio, Profesor Moro Pip, there were many, right? They taught me a lot, you know.

I played microfutbol for the Choco regional team, I also played for the regional youth team in the Copa Castalia, I was originally a midfield playmaker.

How did you join Deportivo Cali and how did it feel to break through in the first team?

I joined Deportivo Cali in about 1990-1991. I was playing in the Microfutbol championship in Manizales with the Choco microfutbol first team.

I was one of the youngsters, and in Popular Siuruma de Palmira one of the players from Deportivo Cali saw me and said you carry yourself like a football player.

Profe Pomporio and the others said I should play football, and they asked if I would join Deportivo Cali for some trials and I said yes.

For 15 or 20 days I was with Deportivo Cali on trial with Profesor Carlos Valencia from Popular Tibulin, may he rest in peace, and he asked right away if I wanted to join the team with Arley Betancourth.

In 1996, you finished top scorer and won the league with Deportivo Cali, what was key to success of the side?

The key to success was professionalism, with Profesor Fernando Castro. He arrived and we knew what we had to do.

He took over a strong group with players like Guigo Mafla, Bonilla, Escobar, Zapata, Miguel Calero, Ever “Chaca” Palacios, Manuel Valencia, Botero, Alberto Perez – you can see it was a great team — Pareja.

Later El Pibe [Carlos Valderrama] arrived. With El Pibe I scored 37 goals. This championship win was incredible; the discipline, the closeness of the group — this was key to our success.

How did you hear about the opportunity to move to Middlesbrough and what were your first thoughts?

When I arrived in England, at the start it was difficult due to the different type of football. In Colombia the football is slower, lots of fouls while English football is more dynamic, less fouls, fewer stoppages. Plus the weather, the language — a whole new experience.

Thankfully I joined in the side when they were in first division and this helped with my adaptation. First, I was there, and later I played in the Premier League and the step up wasn’t so difficult.

I scored lots of goals, I was the fifth highest scorer in the Premier League and I played in the FA Cup Final against Chelsea.

What were some of your favourite memories in Middlesbrough?

Favourite memories? So many. I remember when I was the best player at Middlesbrough — they voted me their player of the season.

Lots of nice goals. I won goal of the month, played in the cup final, and scored lots of goals. Pretty memories, lovely memories.

To be embraced by the city, to hear the fans singing my name around the whole stadium – “Ricard, Ricard, Ricard.”

The truth is, it was something amazing. The first day I arrived, when I went down onto the pitch and the fans were singing “Colombia, Colombia, Colombia” it gave me goosebumps. These are things I will never forget.

To go to a World Cup is definitely the best — the highest thing a footballer can achieve.

For me it was a dream come true to play at the World Cup in France. It was something great, something I couldn’t have imagined. It was the biggest goal achieved.

Playing at a World Cup was something completely different. An entire people, an entire country behind you. All of the dreams, all the cries, all of the joy. It was something that only happened one time and something I can never forget.

During your career, you have played in many countries, including Bulgaria, Japan, Ecuador, Cyprus, Spain, China, Uruguay and Chile; Did you enjoy playing in new leagues and experiencing new countries, or was it just part of the job?

Well, I was in many countries for my work and I enjoyed that. It was my work and of course I was better paid in some places than in others, but I also did it for the experience, to learn, and to travel the world.

I got to know lots of leagues, lots of countries. It opened my mind, it made me a different person, it taught me to think differently.

In all the leagues I played in it went really well, at no point did I feel I failed. I always scored goals, I tried to improve the team and, well, I enjoyed it as best I could.

Thanks to God I am still recognised in these countries, and for me, the truth is, that is something very special.

You had a very good time in Uruguay with Danubio and then you moved to China, was that a difficult decision?

For me, when I take a decision you know it can go well or it can go badly but with both Uruguay and China — they were the right choices.

With Danubio we won everything, we played some great games, I was one of the key players. I was voted as one of their player of the decade. For this I feel so much gratitude.

The choice wasn’t difficult — I like the adventure. In China things went well too. For me I had this opportunity and I just went for it.

After a long and successful career, what are your proudest achievements?

The biggest achievements would be playing a World Cup, Copa America, winning the championship with Cali, winning the title with Danubio, winning titles in various leagues, making friends all over the world, and making an impact.

Also opening new doors for Colombians. Everywhere I went I tried to leave a good impression and create new chances for other Colombians. This is something I am proud of.

So, what more than this? What more can you do than contribute to lifting the name of your country high. For this I am immensely proud.