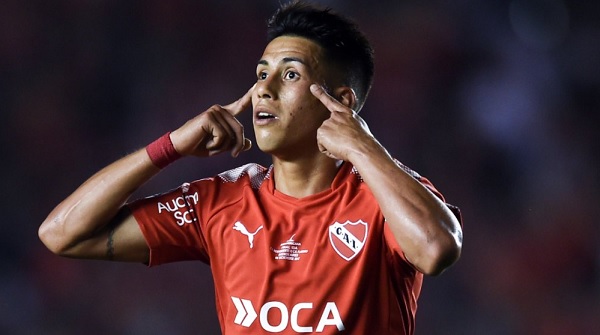 Other than Lionel Messi, the standout name in the Argentina World Cup squad is Maximiliano Meza, but, unlike Messi, this is primarily due to the fact that most football fans don’t know him.

Contrary to what many believe, Meza could prove to be a very useful asset for the Albiceleste at the World Cup.

Meza was born in La Plata, on the 15th of January 1992. He joined the Gimnasia La Plata youth academy and progressed through the ranks.

He caught the eye of coaches across the youth system and he was touted as a possible star for the future.

He made his first team debut in the 2012-13 season, where Gimnasia won promotion from the Nacional B. Over the next couple of seasons Meza established himself as a regular over the next few seasons and he eventually got his move to Avalleneda based side Independiente.

While at Independiente, Meza really pushed on and made a name for himself as one of the best attacking players in the league. Capable of playing anywhere across the frontline, whether it’s right, left, or in behind the striker, his versatility is a brilliant asset which endears him to any manager he plays for.

His consistency is also another big factor, even on an off day he is capable of producing a 7/10 performance, which is very unusual for an attacking player.

Meza is extremely skilful, capable of nutmegging anyone in any area of the pitch. A trait which further increases the Independiente fans affection for him.

He’s also very ambidextrous which adds to his unpredictability, and adds to his effectiveness in the final third. Capable of cutting inside and trying to slip a ball through as well as going on the outside and crossing.

Maxi is an extremely quick player and his acceleration helps him power past players. With decent passing ability and vision and very good positional sense, Meza is a brilliant player to have on your team.

His attitude is very humble and his behaviour is impeccable, which is part of the reason why Sampaoli preferred him to the mercurial Ricky Centurion.

Meza can sometimes be frustrating due to his tendency to hold on to the ball for too long, and sometimes he dribbles for a prolonged period and loses the ball cheaply.

Another weakness is his lack of power and physical strength, Meza is very lithe and that occasionally leads to him being overpowered by more burly players.

For an attacking player, his numbers are somewhat disappointing, but he offers a lot more than just goals and assists. His contribution to the overall play cannot be shunned.

I suspect he may have a prominent role at the World Cup, especially considering Argentina’s weakness in the wide areas.

The only natural wide players the national team are Cristian Pavon and Angel di Maria, with Eduardo Salvio and Marcos Acuña set to be used as wing-backs.

Meza could be a rotation option on either flank, he would also be a brilliant impact sub with his raw pace and incisive dribbling ability.

There has also been talk of him filling in as pivot in the centre of midfield, although he may lack the tactical awareness and passing ability to perform that role at a high level in a tournament of the World Cup’s calibre.

Meza is 26 years old, entering his prime, and in the best form of his career. His selection is completely justified and he will add a lot to the Argentinean squad.

Who knows? It may well be a breakout tournament which thrusts him into the spotlight. Definitely a player to keep your eyes out for at Russia!