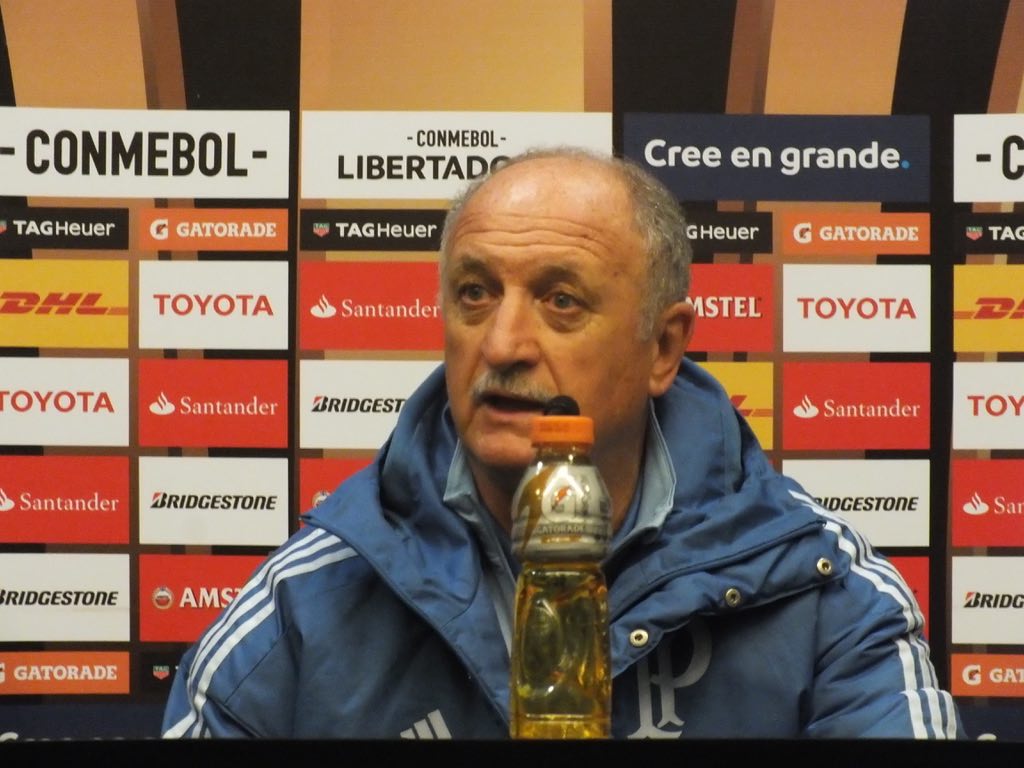 In the week that Chile celebrated its 208th year of independence from Spain, the supporters and players of the country’s most successful club anticipated this game with much excitement. Our reporter Adam Brandon was there to tell us more…

Was it the magnitude of the occasion? Or the rustiness caused by no match action in almost three weeks? Only they will know, but the slow start ultimately proved costly in this first leg.

Palmeiras won a free kick in the opening seconds and then followed it with a three minute spell of domination eventually leading to Bruno Henrique crashing the ball home.

The Colo-Colo defence had looked all at sea after as soon as Esteban Paredes gave the ball away dribbling the ball out of defence. Some credit has to go to Colombian striker Miguel Borja and the number 10 Moisés who worked it well to set up Henrique, but the truth is it was an entirely avoidable goal from the Chilean standpoint.

El Monumental was shellshocked and the side from Sao Paulo were gaining full control of the game, intent on taking advantage of Colo-Colo’s sloppiness in possession. 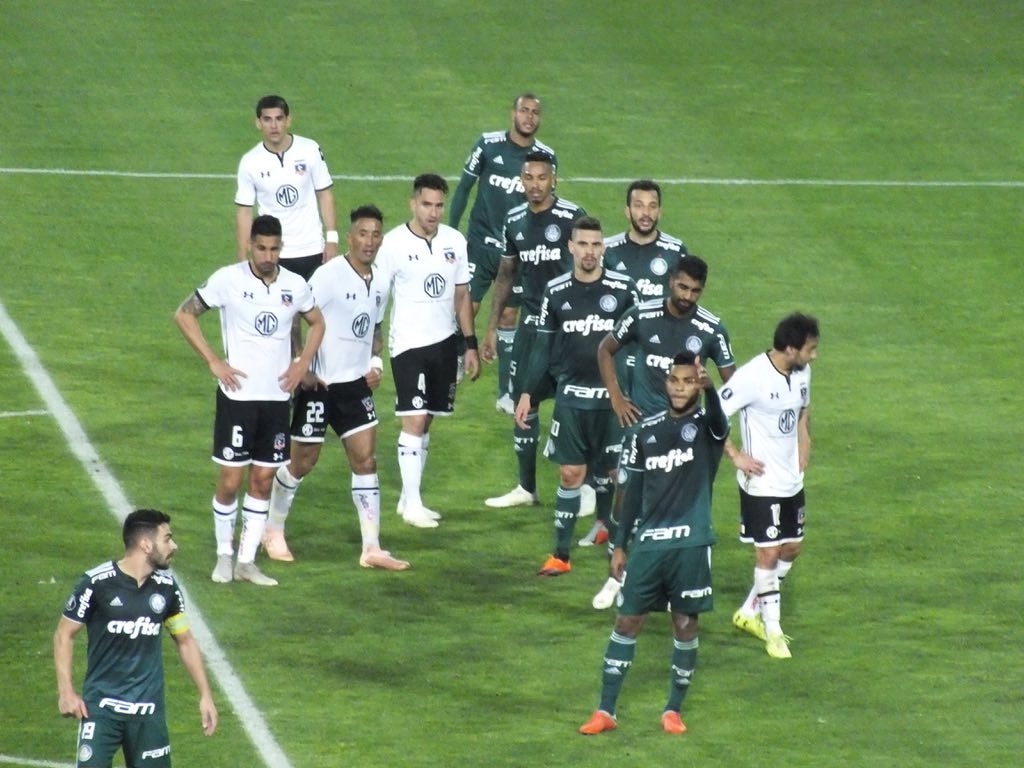 A number of efforts followed during the first half: Willian crashed a shot well over the bar, Dudu saw his low drive well saved by Agustín Orión in the Colo-Colo goal, Moisés minutes later tested him too. Later in the half Dudu curled one wide from the edge of the box.

However it wasn’t all Palmeiras. Colo-Colo grew into the encounter once they started getting the classic South American playmaker Jorge Valdivia on the ball. And as the first half developed, so did Valdivia’s influence on proceedings.

An outrageous piece of skill midway through the first half brought the home fans to their feet, mouths a gasp as his backheel turn on halfway left two Palmeiras players stranded in midfield and started a move that led to Colo-Colo’s first real chance of the game, a move that ended with Esteban Paredes’ shot being deflected over.

A free-kick a few yards outside the box moments later gifted Colo-Colo their best chance of the half. Paredes’ curling effort was saved by Weverson, and then with the goal gaping defender Julio Barroso lifted the rebound over the bar from a couple of yards out. The reaction of his teammates and the crowd said it all — it should have been 1-1.

Valdivia had been shackled early on in the contest and was forced to drop deeper to try and get on the ball. By the hour mark, he was running the game and seeing much more of it in the final third especially once his two main markers both picked up yellow cards in the first half.

Against Corinthians in the previous round he was Man of the Match as he constantly found Colo-Colo’s runners who had time and space to operate. But it was notable that Palmeiras had done their homework and were more wise to the runs of the Colo-Colo wing backs. Opazo on the right had a much quieter game than some anticipated despite the home side forcing much of their play down that side of the pitch.

Colo-Colo dominated the second half but couldn’t find a breakthrough. They were denied by Weverton on a couple of occasions and by the referee on two more for penalty appeals. First, Paredes appeared to be tripped in the box and then Valdivia saw a shot strike a hand.

The second of those was reviewed by the VAR who encouraged Uruguayan referee Andrès Cunha to take a second look — the first ever use of the system in Chile.

However, to the surprise of the home crowd, he came back from the screen on the sideline to give a corner rather than a penalty. You could feel the hope and optimism being sucked high into the smoggy Santiago night sky. 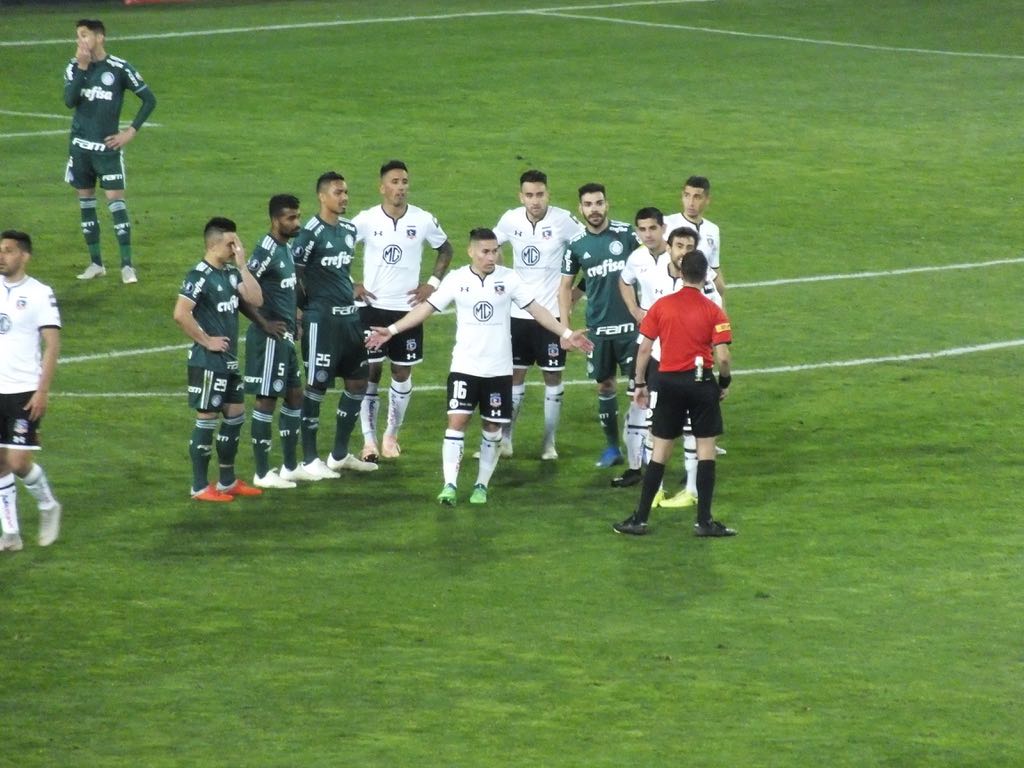 That was even more prevalent when Lucas Barrios headed a golden chance wide moments later, the crowd sunk back down into their seats in resigned unison.

The atmosphere for this one hadn’t been at the level of the previous round. This was partly due to Colo-Colo’s  famous Garra Blanca section having their capacity cut in half by CONMEBOL for their behaviour in the match against Corinthians.

And with twelve minutes to go, the stadium fell silent again when Dudu was on hand to smash it past Orión who was scrambling on the floor after Willian had broken away and smashed a shot against the post.

The Palmeiras players celebrated in a huddle in front of the couple of hundred travelling supporters. It was their first attack of the second half and came minutes after Scolari had gone very defensive by taking off Colombian striker Miguel Borja, who had an excellent first half, and replacing him with defensive midfielder Jean.

Colo-Colo continued to press for a goal to get back in the tie and had to survive a couple of threatening counter attacks. They did manage to create half chances towards the end, but once again the ball fell a yard or two wide of goal rather than in it.

Left wing back Damián Pérez picked up a red card rather harshly in the final seconds after the referee used the VAR system to the detriment of the home side.

Tapia was optimistic that his side could turn it around in Sao Paulo, but admitted the dressing room was anguished at the numerous chances that went begging here in Santiago. Orión felt the result was unjust, but backed up his manager’s confidence that they can spring a surprise in Brazil next week.

In the press conference after the match, Palmeiras boss Luis Felipe Scolari stressed he wasn’t expecting an easy second leg, especially given that Colo-Colo created just as many clear chances on goal. He was also full of praise for Jorge Valdivia who he managed back in 2012 when Palmeiras won the Copa do Brasil – a competition the big Brazilian boss may win again this year.

Scolari’s return to the Palmeiras hot-seat has seen a marked improvement in results. They  have hauled themselves into the title race on the domestic front and their defensive record under him has been impressive. They are now 90 minutes away from their semi-final appearance since 2001 where they lost on penalties to Boca Juniors.

As for Colo-Colo, they are facing a gargantuan task to make it to their first last four appearance since 1997. Their main hope surely rests with the ball magician Valdivia having another trick up his sleeve.