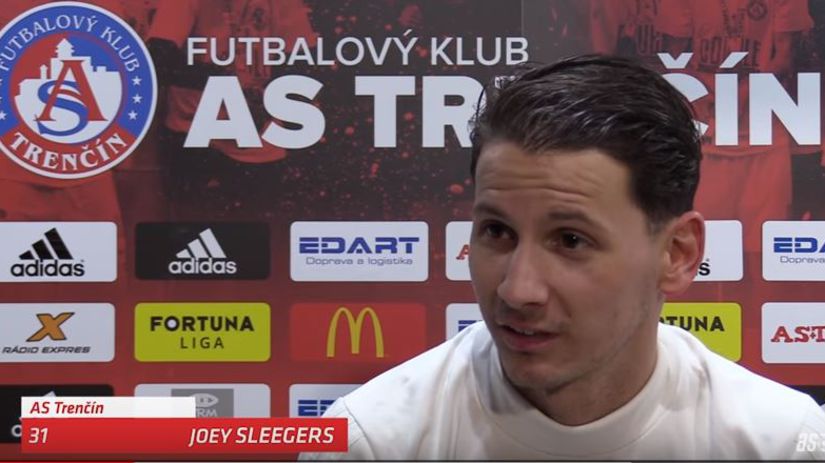 James Rowe spoke to AS Trenčín midfielder Joey Sleegers. They discussed Trenčín ‘s Europa League campaign where they defeated Feyenoord in the third qualifying round, and spoke about Joey’s time at Dutch sides NEC Nijmegen and VVV Venlo.

You scored twice in AS Trenčín’s 5-1 league win at home to Sered. Can you describe what it was like to score to goals during that Fortuna Liga match?

It was a great feeling to score two goals especially in the run up to our important Europa League match against Feyenoord this Thursday and it’s nice to feel good going into that match and I am really looking forward to it.

How did you prepare for the Europa League game against Feyenoord. Did you do something different? And did you have a specific approach in order to beat them?

Not really no. We did what we always do during training. Trained each day and also watched footage of Feyenoord.

We played to our strengths. I was really looking forward to playing against my former club, so it was an extra special match for me, and especially the second leg match in De Kuip, Rotterdam.

We wanted to get a positive result at home in the first leg to be able to play a good match in Rotterdam in the second leg, and that’s what happened.

[Trenčín won the first leg against Feyenoord 4-0, drawing the second 1-1 and going through 5-1 on aggregate. They were eventually knocked out by surprise package, AEK Larnaca of Cyprus.]

What would you say are the strengths of AS Trenčín Joey. How would you describe the team?’

I think we play attacking football and we like to apply pressure in the oppositions half of the pitch. We also play at a high tempo too.

We have many players that can score goals and many creative players too.

You also have a Dutch manager in Ricardo Moniz. What are his qualities and strengths as a manager?

I notice that he wants his teams to have a lot of depth to their game which not many teams have. He also managed Red Bull Salzburg in the past and did very well there.

When we lose the ball he wants us to get it back within three to five seconds.

As an attacking player he gives you a lot of freedom to make your runs and play your passes and that is great to hear from a manager because not every manager appreciates such players.

You also played for Dutch club NEC Nijmegen in the past. How do you look back on your time there?

I went to NEC Nijmegen from Feyenoord and I arrived as a winger. I had to adjust in the beginning and I managed to play a few matches in the Eredivisie under the then manager Ernest Faber.

In my second season we had a new manager in Peter Hyballa. We did not click as player and manager and I chose to go out on loan.

You went on to play for VVV Venlo on loan. How do you look back on your time at that club?

I really enjoyed my time at VVV Venlo. Their manager Maurice Steijn showed a lot of belief in me and wanted me to come to the club.

I played with VVV Venlo in the Dutch first Division and we became champions playing good attacking football.

I managed to play my part, scoring eight goals and providing a number of assists.

Maurice Steijn is a manager who gets his team playing as a collective unit. He knows how to set up a team. He is aware of the quality of all his players and his teams reflect that.

Could you say who are the best players that you have played with so far in your career?

During my first year at Feyenoord there was Jordy Clasie in the midfield, who had such quality.

Also we had Graziano Pelle as our striker. He would eat up every ball that came in to the 16 yard box which was great to see.

Are they any particular matches you have played in that have stayed with you so far in your career?

Yes particularly my first season at FC Eindhoven where I played a lot of matches because it was my first full season in professional football. I look back personally on many special matches during that season where I was also named ‘talent of the year’ at the club, which was a great honour.

We have spoken about managers today Joey. Who are the managers that have been influential in your career so far?

Jean-Paul de Jong [currently managing FC Utrecht] was my manager in my season at FC Eindhoven.

He was very important for me. He has a great quality of reading players both on and off the pitch .

They way he gets on with his players and approaches them ensures that they can perform to the best of their ability on the pitch.

Finally Joey. You are currently playing football in Slovakia having previously played in the Netherlands.What are your future ambitions. Is there a particular league that you would like to play in one day?

My goal is to play really well for AS Trenčín this season, providing goals and assists and look to see if the next step is possible, preferably staying abroad and perhaps going to a top six club. That is where my ambitions lie.

I am big fan of La Liga and I watch as many matches as I can so a move to Spain would be a dream come true.