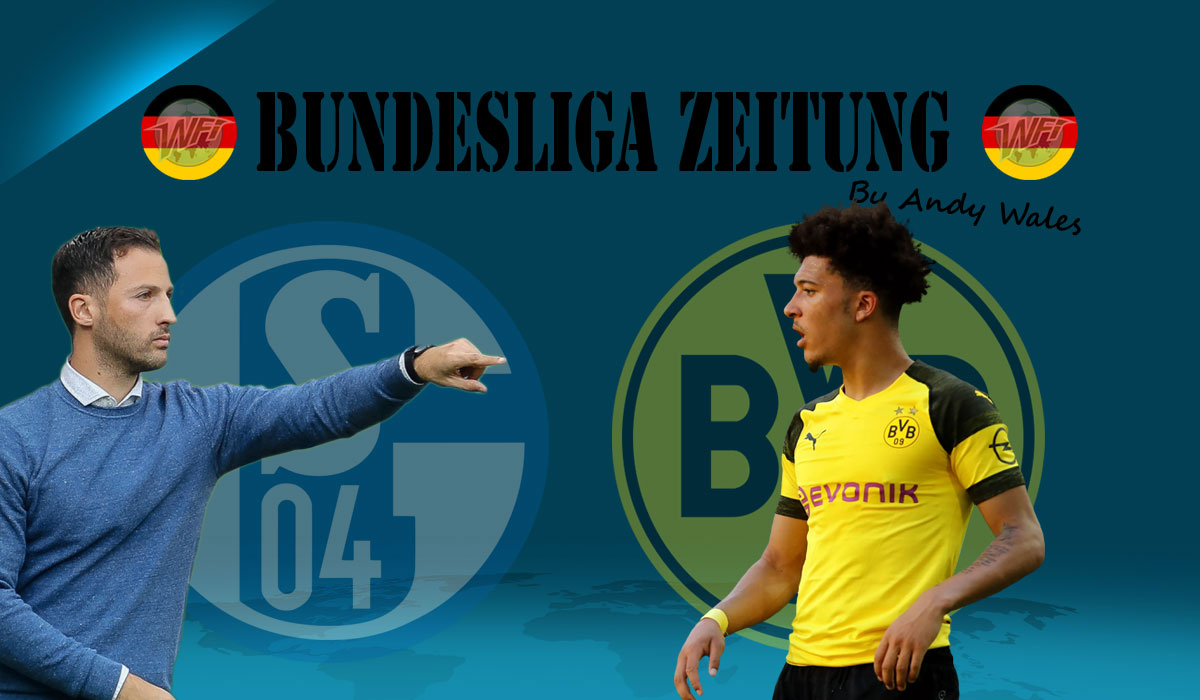 The talk this past week in the Bundesliga has been dominated by the Revierderby; the classic head-to-head game between the two powerhouse clubs of Germany’s industrial heartland.

In the end, this proud local derby in the Ruhr region of Germany was decided by an Englishman.

Of course, that man is Jadon Sancho and if you’ve watched him play for Dortmund this season, it’s unsurprising that he was ultimately the difference between the two big rivals.

Although the scoreline suggests a close game, there has been a chasm of difference between the two teams this season.

Borussia Dortmund, under Lucien Favre, are clear at the top of the table and well fancied to dethrone Bayern München for the first time since 2012.

Schalke however, are languishing just below mid-table after a dreadful start to their campaign. The task facing Domenico Tedesco at the Veltins Arena was an arduous one, and not helped by injuries to Mark Uth and Breel Embolo.

Perhaps it was therefore expected that the visitors started the stronger of the two teams and Dortmund’s early command was soon rewarded. A free kick out wide in the seventh minute was whipped in masterfully by Marco Reus and there was Thomas Delaney with a bullet header to break the deadlock.

Tedesco looked crestfallen on the side lines at conceding the goal so early on. Favre meanwhile, could afford a wry smile and the travelling fans were jubilant at the bright start from their team.

Schalke struggled to make an impact and gain any real footing in the contest, with a hopeful handball shout against Axel Witsel their only glimmer of hope. The referee though, backed up by VAR, denied that claim.

Dortmund’s control ironically became their undoing as the half wore on though. They seemed content with their one goal lead as they invited the hosts to come into the game.

As dangerous as Sancho looked on counter attacks, taking their foot off the gas was a risky ploy with Schalke gaining in intensity before the break.

Having said that, Schalke still rarely threatened an equaliser but with the game so finely balanced, there was still plenty to play for after the interval.

Dortmund continued this game of cat and mouse early in the second half, attempting to draw Schalke in and hit them on the break. In the end, the pattern of the game changed in slightly bizarre circumstances.

Marco Reus appeared to use his body well to shield the ball and roll Amine Harit. Despite the protestations of Harit, it looked an innocuous enough incident and the game continued until Dortmund stopped their own attack to put the ball out of play with Harit still on the floor.

The referee then consulted with his VAR officials and awarded a spot kick after looking at a replay. Opinions will inevitably be divided on the validity of the decision made and the farcical way it came about. Personally, I do not think it was a foul, but it did provide the game with the spark it needed.

Daniel Caligiuri promptly dispatched the penalty and with an hour on the clock, Schalke were level.

The match had been good, but not absorbing up to this point, but from here on in, it was a proper derby. The atmosphere was lifted, as was the intensity levels on the pitch. Pretty soon, tempers were boiling up as well with a bit of a melee after some squabbling over the ball after the award of a free kick to the visitors.

Dortmund appeared frustrated at the penalty decision and the loss of their lead in a game where they largely looked comfortable.

The question at this stage was whether they would lose their heads at this sense of injustice, or would it spur them on? The answer seemed to be the latter, and with Schalke also encouraged by their goal, the match became more back and forth.

The decisive moment of the game came in the 74th minute; Sancho picked up the ball and started one of his dribbles, exchanged passes with substitute Raphael Guerreiro and then, as he cut into the left side of the box, curled his shot around Ralph Fährmann and into the bottom corner.

It was a wonderful goal, worthy of winning any game, let alone one as big as this. It was also an emotional moment for the young Englishman after the sad loss of his Grandmother earlier this week. Favre and Reus paid testament to the character of the youngster being desperate to play, despite his bereavement.

After the goal, Schalke pressed for another equaliser, but it was Dortmund who looked the mostly likely to score again, with only the post denying Guerreiro from doing so and rounding off another fine move.

The delight for Favre at the final whistle was evident; this was an important win for his team and with Bayern brushing Nürnberg aside 3-0, it maintained that nine point gap back to the reigning champions.

However, most important to Dortmund fans will be the bragging rights that come from this victory over their near rivals.

For Schalke and Tedesco, this was another disappointment in mixed bag of a season, and if things are to improve after the winter break, perhaps reinforcements will be required in January.