Bayer & Bravertz In Their Element In Hannover Snow 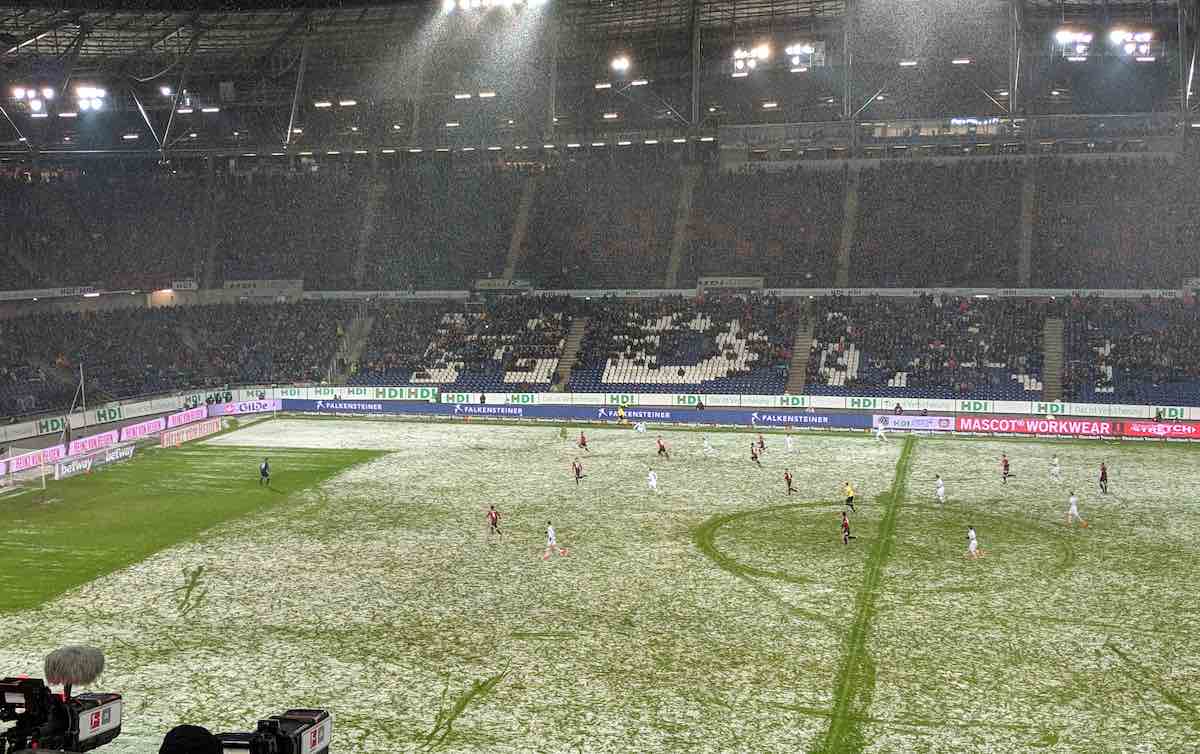 Bravertz they call them. Julian Brandt and Kai Havertz propelled Bayer Leverkusen up to fifth in the Bundesliga, with a little help from on-fire striker Kevin Volland.

The conditions in Hannover were difficult, cold, and their opposition were spirited but, Die Werkself overcame each obstacle to move ahead of Eintracht Frankfurt in the table.

For the home side there were some promising signs and their support — 33,800 of them — stayed with their team throughout. There was a fightback, and they were level at 2-2 having been on top for a period of the game, but it wasn’t to be.

Hannover’s situation was summed up when Genki Haraguchi looked to have pulled a goal back in the first half with his side two behind. He rounded Bayer goalkeeper Lukas Hradecky and sent his shot towards the empty net.

Jonathan Tah, the Leverkusen defender who was chasing back had given up as he watched the ball roll towards the goal, but just as Tah slowed down, so did the ball, pulling up just short of the line allowing the German centre back to recover and clear the danger.

It’s the kind of luck which seems common in football for teams lodged near the bottom of their league table, and Hannover certainly fall into that category at the moment. 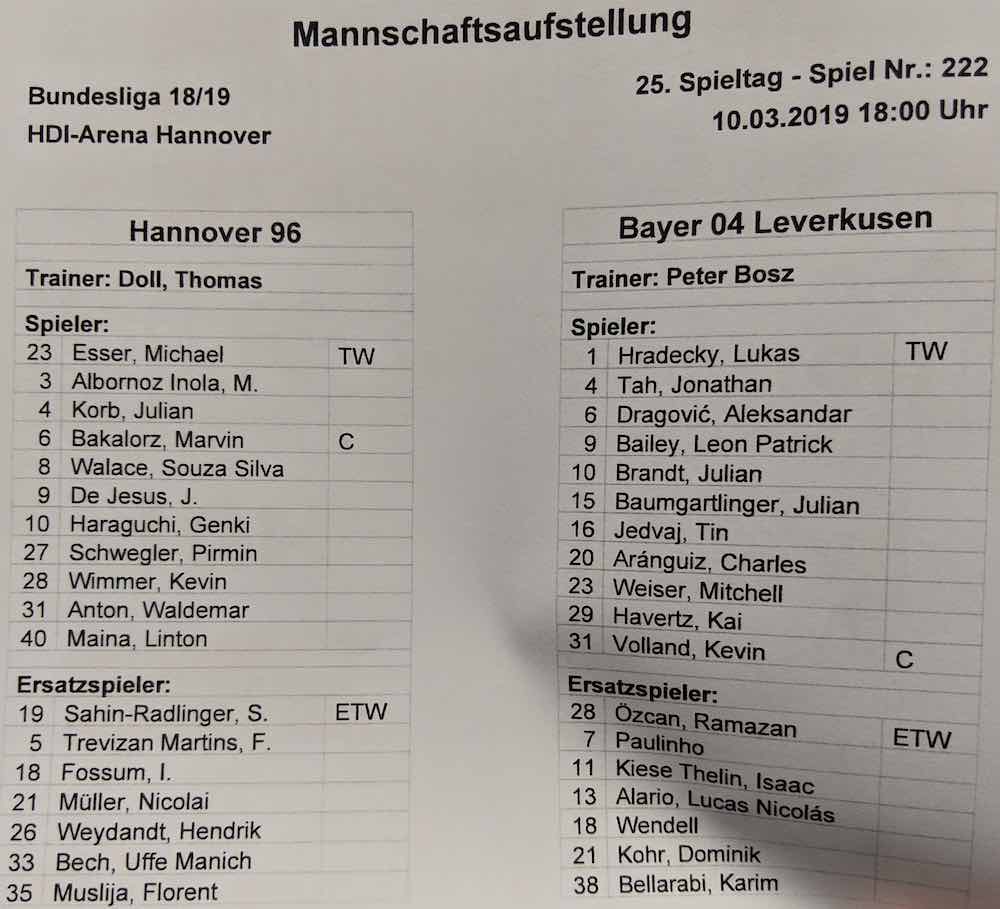 Going into this Sunday afternoon fixture Die Roten had only scored twice in their last seven home games, with both of those coming in February in a 2-0 win against the only side below them in the league table, Nürnberg.

That was only their third win of the season, and along with the rest of the bottom six they are struggling to find form.

Teams in this group can take some solace from the fact those around them are just as bad, and a string of good results could quickly reveal some light at the end of the tunnel, but Hannover were unable to kickstart such a run here.

The constant drizzle which had fallen on the city throughout the day turned into snow shortly before kick off as the temperature plunged.

Snow soon covered the pitch and caused problems with the run of the ball and the visibility of the pitch markings.

This didn’t affect the visitors who scored twice through Volland. The first came following good work down the left by Leon Bailey, but was really a gift from goalkeeper Michael Esser who spilled Brandt’s shot presenting the striker with a tap-in.

Snow falls as the Hannover fans encourage their team, who are already a goal down against Bayer Leverkusen #H96B04 pic.twitter.com/ItQDgwTGTd

The second was of Bayer’s own making, with Brandt sliding a ball through to Volland who dinked over Esser.

The game was stopped twice while snow was cleared from the pitch markings, and on the second occasion play was suspended and the players taken off the pitch.

Short break while the lines are cleared pic.twitter.com/lpalFmUiz7

Hannover were the better side for periods of the second half. A goal from Jonathas and an own goal from Mitchell Weiser had them back in the game, and at one point they were chasing three points… until Bravertz stepped up.

Brandt was judging the run of the ball on this different, difficult playing surface better than most players throughout the game, so it was no surprise when he popped up in space and set up his side’s third.

Some good link-up play ended with Brandt crossing to Havertz who headed home the winner. It looked like Karim Bellarabi had made it four in injury time but VAR ruled it out.

Bayer may one of the best teams to watch in this league, and possess some of its most promising players outside of the top two — even including the top two — but they are not in the Champions League spots when it feels like they should be.

They are four points off fourth-placed Borussia Mönchengladbach, but Eintracht Frankfurt will have the chance to retake fifth spot when they play Fortuna Düsseldorf in the round’s final game tomorrow. 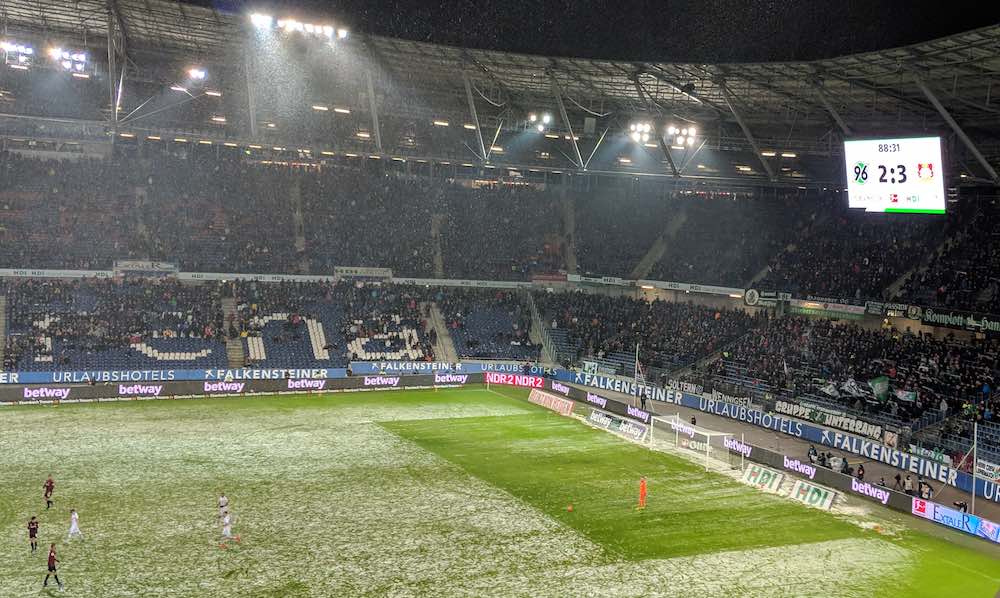 Hannover can take some positives from this game, not least from their two goals which doubled their tally at home for 2019, but also from the performances of some of their players including Japan international Haraguchi.

Nürnberg, Stuttgart, Schalke, and Mainz all played their part in this round of games by losing theirs, with only Augsburg of the bottom six claiming a point.

It’s looking as bleak as this evening’s weather conditions down at the bottom of the Bundesliga, and Hannover are right in the thick of it.

They need to call on some of the spirit they showed in flashes today, and then some more if they are to narrow the eight point gap between themselves and safety.

They have a run in of nine games which pits them against three of the bottom six and only two of the top four.

Thankfully for them, they won’t be facing Bravertz™ again this season.