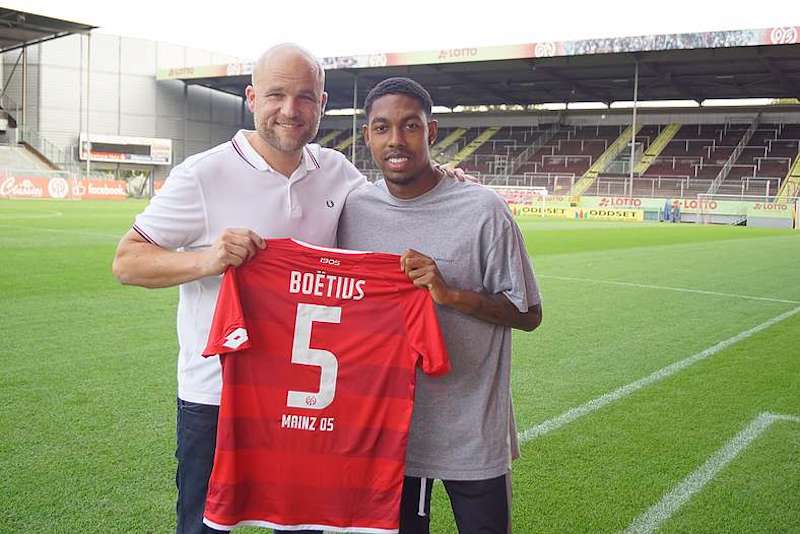 James Rowe spoke to Mainz 05 winger Jean-Paul Boëtius exclusively for WFi. They discussed his time with Feyenoord, what it was like to come up against Kyle Walker, and the most influential coaches he’s worked with.

You signed for Mainz in 2018. Are you enjoying your time at the club? How does it feel to be playing in the Bundesliga?

I am really enjoying my time at the club. We won our last match and we are in a good position in the league.

We are currently firmly in 12th place and I believe that the Bundesliga is a good fit for me. Mainz is a really good natured club with a stadium of 34.000 and fans that really get behind the team.

They never boo if we are losing and they sing their hearts out and support us every match.

The players, backroom staff, and the board also have a very strong bond with one another and everyone is treated equally, which is something I really like.

💬 Jean-Paul #Boëtius: “My first thought after the final whistle was ‘two days off.’ We’re very happy about the win and staying up.” #UpTheMainz #M05F95 pic.twitter.com/KVzFgxMp8z

You played for Feyenoord in the past coming through the youth teams and making your debut for the club. How do you look back on your time there?

I had two spells at Feyenoord coming through the youth team. In one of my seasons it did not go too well and people at the club appeared to have their doubts about me, and there appeared to be questions marks about my contract.

I went to FC Basel and was subsequently loaned to Genk before returning to the club and starting the season strong and finishing it quite well, too.

Mainz came in for me and I have no regrets about my decision to come here, although it was a difficult decision to leave Feyenoord.

You mentioned your time at FC Basel. How do you look back on your time there and how would you describe the level of the Swiss League?

The Swiss League is a good league and different to others in Europe, for example you play four times against the bigger teams in the division.

It was also different in a physical way. I was somewhat unlucky with injuries that season, but when I was fit I played and we eventually became Swiss Champions.

That was the first and only time that I have become champion in my career so far, and that was very special.

Every player wants to win the Championship especially if you are playing for a team challenging for trophies.

With your career and everything you have achieved so far could you say who are the best players you have played alongside?

Of course I have also been capped by my country the Netherlands, and if I was to say a player that really made an impression on me it was Wesley Sneijder.

I enjoyed the training sessions with him and seeing how he conducts himself.

Also Robin van Persie, in particular his last season at Feyenoord. You can still see how much quality he has especially in the way he receives and controls the ball.

I can imagine in your position as a winger you have come up against difficult opponents. Are the any that stand out for you?

Last season at Feyenoord we played against Manchester City in the Champions League and I came up against Kyle Walker.

He is also the right back of the England national team and he was really quick. That was a tough match and Kyle Walker really impressed me.

Finally Jean-Paul, who are the managers that have played a key role in your development as a professional footballer?

I debuted for Feyenoord under Ronald Koeman. He saw something in me and that was great given what he has achieved in his career.

Louis van Gaal called me up for the Dutch national team. He is not afraid to tell players what’s what and he is brutally honest. I remember the one and only time I have been called up and as a new player you have a one to one meeting with him in his office where he wants to get to know you better.

You also get the chance to elaborate about your personal life and career so far. He showed a genuine interest in me.

You only have to look at what he had achieved in his career, and I think it really shows his class as a manager that he wants to get to know you better not just as a footballer but also as a person.