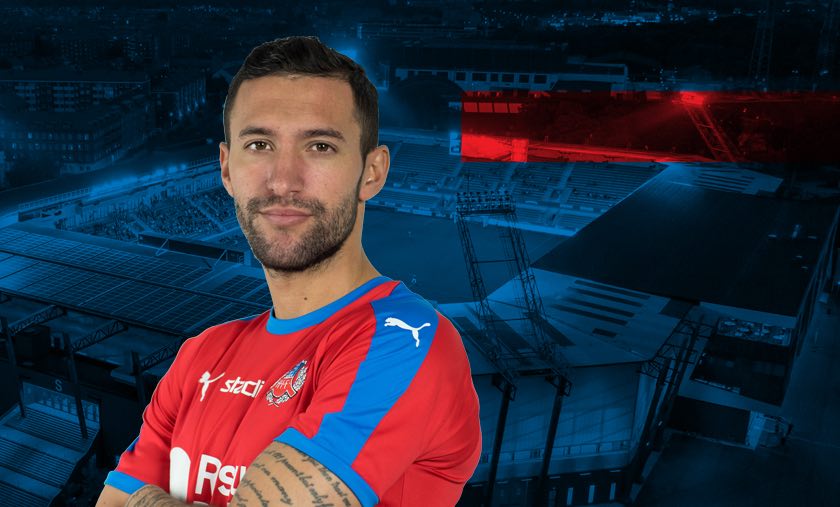 James Rowe interviewed Helsingborgs’ Danish winger David Boysen exclusively for WFi. They discussed his time playing in Israel, and what it was like to play alongside former Liverpool player Daniel Agger.

You signed for Helsingborgs IF in February 2019. How are you enjoying your time there so far and how would you describe the club?

Helsingborgs are a big club with a rich history. We are playing our home matches in a pretty much brand new stadium with state of the art facilities that are really modern both inside and out. A big gym and changing rooms too.

We also have a big fan base when you walk down the street in the city you meet a lot of people who support the club.

Helsingborgs are a famous club and I am delighted to be playing for them.

You had a spell playing for Brondby in your native Denmark. How do you look back on your time there, and do you have any particular highlights?

I believe I played some of my best football at Brondby, and peaked as a player. I was playing regularly and scoring goals.

We had a good cup run and were positioned towards the top of the Danish SuperLiga. I really enjoyed my time there, however we had 3 managers within six months.

For example the manager that brought me to the club resigned only two weeks later. Shortly after that Brondby hired German coach Alex Zorniger and I did not fit into [the style] he plays because I play as a winger and he plays with a diamond formation.

We did not get on well with one another. I was disappointed not to be playing or have a future at the club, and after that I left for the Netherlands, signing for Roda JC.

You also played for Beitar Jerusalem in Israel. Can you tell me about your time at the club as they have a reputation of being one of the biggest clubs the country.

The best way to describe Beitar Jerusalem is that their fan base is massive. They play in front of 25.000 supporters every match.

I remember when we played the Israeli Cup Final and the city was loaded with people.

I remember when we would play away matches around Israel there would be around 10.000 fans for every away match.

But during my time at the club there was some trouble within the organisation. The owner did not get on well with the fans and that filtered down to the players.

I remember after only two weeks being told that I had to move on by the owner due to my high salary, and going into the changing rooms on a match day to find my kit and equipment moved to a different place.

I went to the club for the experience as my family is also from Israel. It is not a time that I regret because it taught me a lot about life and how strange things can happen in football.

I felt for the fans because they are amazing. and the people working inside the club too.

I do not know how it is now but during my time there, there was definitely too much politics within the club.

With you experience in playing in different countries such as Denmark, Israel and now Sweden, could you say who are the best players that you have played alongside so far in your career?

When I was younger I played with Christian Eriksen and we represented Denmark together at youth level, but to be honest that would be a bit too easy just to say him because everybody knows him!

I would say during my time at Brondby I was really impressed with Daniel Agger and in particular how he trained as a professional. He would treat every player the same.

He was not was physically the player he was when he played in the Premier League, but he was still a player of pure quality.

He would come into training two hours before everybody and he treated his body really well.

I would also like to mention Nicolai Jorgensen who currently plays for Feyenoord. We are both from the same town and we grew up together.

I was delighted for him that he became top scorer in the Eredivisie, and we were in the same team together when representing Denmark at youth level.

I can imagine in your position as a winger that you have come up against many good opponents during your career. Are there any that stand out for you?

I would say that one of the toughest players I played against was my international teammate Jens Stryger Larsen, who is now playing for Udinese in Italy.

We played against each other for many years in the Danish SuperLiga when he was playing for Brondby and Nordsjaellend and I was playing for Lyngby and Viborg. He has so much stamina.

During my time in the Netherlands I remember the then right back for PSV Eindhoven Sergio Arias (currently at Atlético Madrid). When I played against him he was pure quality. I could not get by him, he was a great player.

Finally, David, could you say which managers have played a key role in your development as a professional footballer?

Yes I would say that current manager of AGF Aarhus, David Nielsen.

He has been the manager that I have been the most content with as a player, and I would also like to mention Johan Lange who is currently Technical Director at FC Copenhagen. He was a coach when I played at Lyngby in Denmark during the early stages of my career.