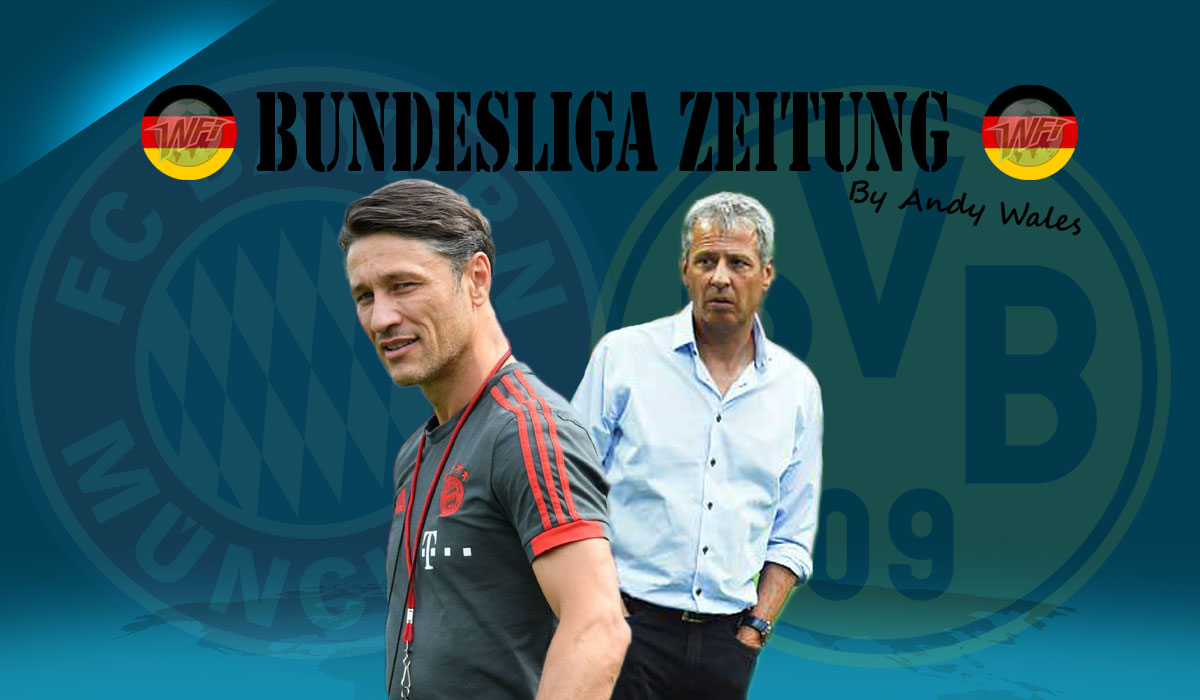 It’s an apt time to look back and forward with a sense of optimism in this edition of the Bundesliga Zeitung.

It’s fair to say that despite winning the domestic double and splashing €115m on French international defenders Banjamin Pavard and Lucas Hernandez, all is not rosy in the garden at Bayern.

Bayern and Dortmund go head to head again. Who ya got? pic.twitter.com/GeeTxp2wJ1

All the talk emanating from Bayern before the transfer window opened was that of spending big this summer and although Hernandez was very expensive, there is still no sign of further reinforcements.

Perhaps the long-running pursuit of Leroy Sane will be successful, but for now, the growing unease amongst Bayern fans at a lack of squad depth mirrors the uncertainty that still lingers for head coach Niko Kovac.

To get a greater picture of the present and the future, first we must revisit the past.

For five years, the Bundesliga has yearned for a genuine title race and in 2018/19 we got one. Dortmund pushed Bayern all the way and although the race was something of an unorthodox one, the championship was not decided until the final day.

Yes, Bayern still came out on top and yes, Dortmund will rue the multiple missed opportunities to win it, but we still got a title race we were not expecting this time last year.

Lucien Favre arrived at Dortmund with a reputation for improving teams. Expectations were ones of improvement and galvanising a club that had lost its way, they didn’t extend to winning the Bundesliga.

Favre had Dortmund purring up until the winter break, the famous yellow wall was once again bouncing to invigorating football as they raced into a formidable lead at the top.

Bayern, under new coach Kovac, had started the season well but soon looked vulnerable. Injuries and an ageing squad did little to help a coach rumoured to be far from being the first-choice appointment of Karl-Heinz Rummenigge and Uli Hoeness. By late Autumn, Bayern’s title chances and Kovac’s job were both hanging by a thread.

Heading into the winter pause, expectations had dramatically changed. Dortmund had become heavy favourites, but after suffering their first league defeat of the season against Düsseldorf before Christmas, Favre and his team appeared to buckle under the pressure of expectation.

All the while, Bayern were putting results together and gradually finding confidence. Talk of Kovac getting sacked quietened as they strode ahead, but a comprehensive exit from the Champions League at the hands of Liverpool resulted in all the question marks over Kovac’s future returning.

In the end, Bayern got over the line and although Dortmund came close, they spurned clear opportunities to snatch the title.

How does this matter now? For Bayern, the vulnerabilities are still there and if their fragility is exposed, the attention will quickly move to Kovac and his position within the club.

Bayern are still a team in transition and I maintain that they are at least one year behind where the transition of their squad needs to be. An unstable boardroom and elements of the dressing room yet to be convinced with their coach makes for a wound just waiting to be picked at.

For Dortmund, the fact Favre and his team struggled with the pressure inevitably raises the question as to whether or not they can handle the same pressure from the outset of this campaign.

Make no mistake, expectations at Dortmund this season are higher, but perhaps that being the case from the start of the season, rather than it unexpectedly becoming so part way through a season will help them be better prepared.

The club have certainly made their intentions clear in the transfer market. Over the course of a few days, the signed left-back Nico Schulz for €25m, aquired the supremely talented Julian Brandt for the same amount and tied up a €25.5m deal for Thorgen Hazard.

Most surprising though, was the near €30m transfer of Mats Hummels back to the Westfalen. Dortmund mean business and it will be interesting to see if they can strike a psychological blow to Bayern in the Super Cup.

Bayern are still strong and should start the season as favourites, but between the events of last season and the business done this summer, we have plenty to be optimistic about the upcoming Bundesliga season.

Loading...
Newer Post
David Boysen On Football Politics At Beitar Jerusalem & The Professionalism Of Daniel Agger
Older Post
Why Frank Lampard Is The Right Man At The Right Time For Chelsea