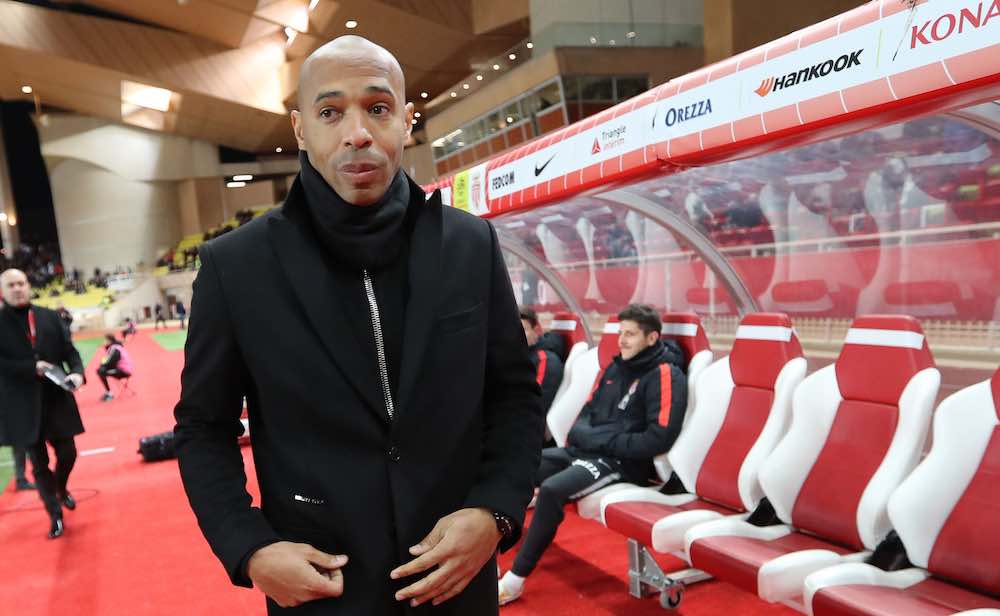 After a glittering, trophy-laden playing career, it’s safe to say Thierry Henry’s time as a manager has so far been an unmitigated disaster.

The 42-year-old won league titles in France, England and Spain, lifted the Uefa Champions League with Barcelona and picked up World Cup and European Championship winner’s medals with the French national team, terrorizing defences along the way.

Since hanging up his boots in 2014, though, it’s been a funny old ride for Henry.

After a short, part-time stint as a youth coach with Arsenal, Henry’s first, and truly bizarre, post-playing career move came to fruition when he became Roberto Martinez’s second assistant coach for the Belgian national team in August 2016.

Working alongside Martinez and fellow assistant Graeme Jones, Henry helped the Red Devils reach the 2018 World Cup semi-finals before losing to his native France — the eventual winners of the competition.

Jones soon departed on his own managerial venture and Henry spent a short time as Martinez’s exclusive assistant. Although that only lasted a few months, his influence around the Belgium squad was profound.

“Henry is the best thing that has happened to me because since I came to England aged 18 I have had the best mentors,” said Inter Milan and former Manchester United striker Romelu Lukaku.

“I have had possibly the five best strikers of the last ten years as mentors.

“I had Didier Drogba, Nicolas Anelka, Samuel Eto’o, Fernando Torres and now, Thierry Henry. That’s not bad, is it? Thierry for me is the best.”

Man of the people no longer

That World Cup bronze medal is undoubtedly the high point in Henry’s career in the dugout so far. In October 2018, the former striker was offered the chance to succeed Leonardo Jardim as manager of his boyhood club, Monaco. Of course, Henry grabbed the opportunity as quickly as he could but perhaps he would have been better served taking a step back and considering his options.

Les Monégasques sat 18th in Ligue 1 upon Henry’s arrival, which was supposed to be the catalyst for the 2016/17 champions to shoot up the table, but things only got worse thereafter.

20 games and just four wins later across all competitions, Henry was dismissed from his duties and replaced by the returning Jardim who just about saved Monaco from a shock relegation from the French top flight.

Henry walked away and his reputation taken a serious hit, not only for the lack of results on the pitch but for some seriously worrying stories about his conduct off it.

From reportedly telling an opposition right-back that his “grandmother is a whore”, to giving youngster Benoît Badiashile a terrifying death-stare for merely leaving a chair untucked at a press conference, it seemed as if Henry, a man of the people during his playing days, had lost his charm in the dugout.

Wow – Thierry Henry the disciplinarian. If looks could kill as Benoît Badiashile fails tuck his chair in at the end of the press conference. pic.twitter.com/1HMJDno1Kq

Henry has now been handed an unexpected lifeline in the form of a managerial role at Montreal Impact, but if he thinks this will be a cakewalk back into the reckoning for a job in Europe’s top five leagues, he would be sadly mistaken.

The Canadian side suffered a tumultuous 2019 in MLS, seeing another Frenchman, Remi Garde, stutter and fail, before they restored some semblance of form under Wilmer Cabrera.

The Impact sealed qualification to the 2020 Concacaf Champions League thanks to their Canadian Championship triumph, but have serious issues to address on the field if they’re to avoid embarrassment in that competition, as well as secure a first MLS playoff berth since 2016.

Montreal conceded the fourth-highest number of goals (60) of any MLS side last season and suffered some calamitous defeats throughout 2019 — 7-1 vs Sporting Kansas City, 0-3 vs Orlando City and 6-3 vs Colorado Rapids barely scratches the surface.

They made six errors leading to goals — the fifth-highest in MLS — and really were the architects of their own downfall. Henry will need to move quickly to stabilize that defence in order to provide a platform for success further up the pitch.

Speaking of which, there are clear problems in that direction, too. Montreal was dispossessed 363 times during 2019 — the sixth-highest in MLS — and have real trouble keeping hold of possession.

According to American Soccer Analysis, they had an expected goals rating of just 37.9 — the fourth-lowest in MLS.

Although the mid-season arrival of Bojan Krkic undoubtedly gives them a greater edge in the attacking third, Henry will have his work cut out to make the Impact more exciting and unpredictable. The Impact didn’t have a single player register double figures for goals or assists last season.

This is quite a large to-do list already and we haven’t even mentioned the ongoing contract situation of Designated Player Ignacio Piatti.

The 34-year-old has, without a doubt, been the Impact’s best player since joining from San Lorenzo in 2014 and although recent signs have been much more positive, his contract situation is anything but convincing.

In any case, Piatti played just 11 MLS games in 2019 and spent a total of 115 days sidelined through injury. Is he really worth the money required to keep him at Saputo Stadium?

The feeling around the club is one of optimism following Henry’s arrival, with Montreal president and CEO Kevin Gilmore saying: “We are very pleased to announce the appointment of this soccer legend.

“Henry will bring a new dynamism to our club. He shares our vision of wanting to elevate this organization by helping us achieve our goals in the field, but also outside.

“He is a competitor and a leader who has distinguished himself at the highest level throughout his career. He brings his skills with him to Montreal, a place he wants to be.”

Henry himself describes the opportunity as an “honour” and says he’s had an eye on Montreal for some time now, having spent five years in MLS with New York Red Bulls at the end of his playing career.

“It’s an honour to become head coach of the Montreal Impact and return to MLS,” he said.

“It’s a league that I know well where I had a great time. Being in Quebec, in Montreal, which has a huge multicultural heritage, is something extraordinary. I have always had an eye on this club and now I am there.”

This will either be really, really good for #IMFC, or an absolute disaster… #ThierryHenryhttps://t.co/PYKFgiOnZV

Will this be the jumpstart Henry needs, or will it be another mark on a small yet already blotted copybook? Only time will tell, but the Frenchman simply cannot afford another slip-up.

With its quirky transfer rules and seemingly inter-planetary travel demands, MLS can push players and coaches to limits further than outsiders to the league imagine. It’s in this melting pot that Henry must truly discover himself as a manager, or slip through the cracks from which he will likely never return.