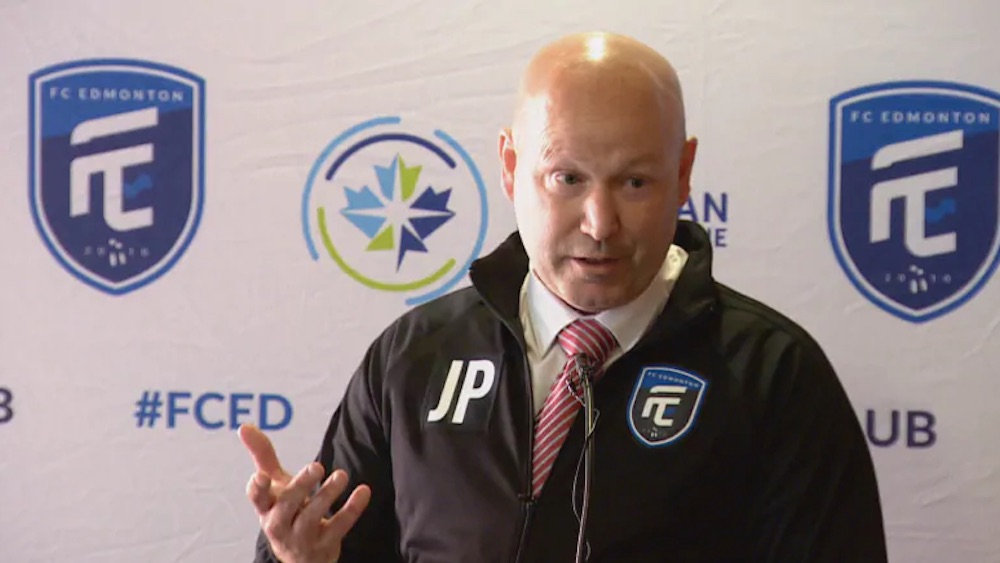 FC Edmonton has had an academy since the club was founded. What’s stopping the other six clubs from doing the same, and how soon do you think we could see them being created?

“Well, probably what stops them at this stage is finances. To run an academy at U16, U18, U20 like we do, plus a female program, it’s quite an expense for Tom and Dave Fath, and they fund that out of their own pockets.

“So I would say money is the biggest factor as far as what would stop teams from jumping in now of course.

“Calgary has a U20 program right now like we do, and they have a great affiliation with Foothills. So they almost have one. I’m not sure you’ll see the academies really rise in the CPL.”

We are excited to introduce the very first coach of the CPL's FC Edmonton. Welcome to the family, @jeff_paulus! Read more: https://t.co/JcrbrX6XQS#CanPL #FCEd pic.twitter.com/BeNdQ4fIDg

A player you coached and is now a regular in Major League Soccer with the Montreal Impact — Shamit Shome. You know him very well. How high is his ceiling in your eyes and is developing players to sell on one of your goals as a coach?

“There is no ceiling for Shamit. His football IQ is through the roof. I think that’s what sets him apart from other players that I’ve worked with in the past. He’s just a student of the game.

“Great kid first and foremost. Smart on and off the field — still in university, still doing courses. He was an honours student in one of the best High Schools in Canada.

“He reads the game very well, his technique is clean. Gets into good areas to get the ball, and defensively he does his job. Presses when he should press.

“He’s just that kind of central midfield player that gives the same performance all the time. He’s someone you can always rely on. I know the work he puts in. I’m delighted for him, he’s having great year. Getting tons of minutes.

“What we’ve done here when the club sold Shamit — this is a model that we certainly want to advance here.

“Bring in young players and give them first-team minutes and it’s a benefit for everyone involved. We want to have players develop here and have them move to a higher level of the game.”

At the beginning of the year, you said that Canada is a healthy and wealthy country. Several expansion reports suggest that we could see as many as 3-5 new teams added in the next two seasons. Your thoughts?

“Yeah, I’m hearing the same rumours. Fantastic. The model that this league has been set up with allows for cities of about a hundred thousand to be accessible. Now that maybe wasn’t possible for one of the other major league sports.

“Soccer is a community sport. We can get into mid-sized communities now and really show the love of the sport.

“From everything I’ve heard, that’s probably gonna happen. I’m not sure about next year how many but certainly within two years.

“There are already clubs that have come forward. We’re already hearing names now that seem pretty firm — pretty good rumours. I would be delighted, there’s so much room for growth.

“Unlike the NHL, which can only go into so many cities in Canada that can support something that big with the infrastructure to build such a large arena. Major League Baseball probably won’t come back into Canada. The NBA requires similar criteria, so our sport is really right there for expansion and I think the CPL will change the game in our country.

“I’ve said that a million times. It’ll change the game because we’ll be in many communities that don’t have other professional sports available to them.”

(Hint: It wasn't on a nice west-coast beach)

Marco Carducci was just called up to the national team — marking a huge milestone for the league. How close was Connor James from cracking that 23?

“He’s gotta be close. First of all well done to Marco. Delighted for him. Fantastic keeper — I think he deserves the opportunity that he’s getting. I’ve got two young keepers here that are very good and have a chance to grow.

“When you look at Connor’s performances throughout the season, I think right there, he’s every bit as qualified as Marco for a call-up like that because he’s played as good as him, so I think he’s close.

“But you can look at other young Canadians that deserve a chance. I’ve got a couple of big central defenders [Amer Didic and Mele Temguia] over some of the others that have been talked about.

“The CPL is here for that reason. When you look at the centre backs, that’s the position most people publicly have said they want to strengthen at national team level.

“You see a [Lucas] Gasparotto, and you see a [Dominik] Zator and others — we’ve got really young Canadians.

The centre-back position seems to be the weakest link.

“In our league, it’s a strength. Good young Canadians that are developing in their craft and they’re all playing 90 minutes a game. So this league will develop players, especially in those positions.”

We also know that the Toronto Raptors winning the NBA Finals inspired and captivated the attention of an entire nation. I’d argue that the same amount of excitement and passion will be replicated in 2026 when Canada and Edmonton welcomes the world. You would think qualifying to Qatar 2022 would give the sport a big boost?

“It most surely will. I’m a Torontonian so I was one of the ones celebrating, going mad over the raptors run.

“2022 is important for the health of your footballing system from grassroots all the way to professional level.

“That’s shown in how well your national team does on the international stage. So our national team making 2022 would be vital. It would fast forward the game here but, that being said, 2026 will be a landmark moment.

“Hopefully there will be 16 teams by that point. We’ll be healthy, we’ll be front page in the newspapers because of the size of it, and then we host and take the game to a whole other level.

“So very important moments coming up for our sport. We’re seeing now a change and it’s only gonna get bigger.”