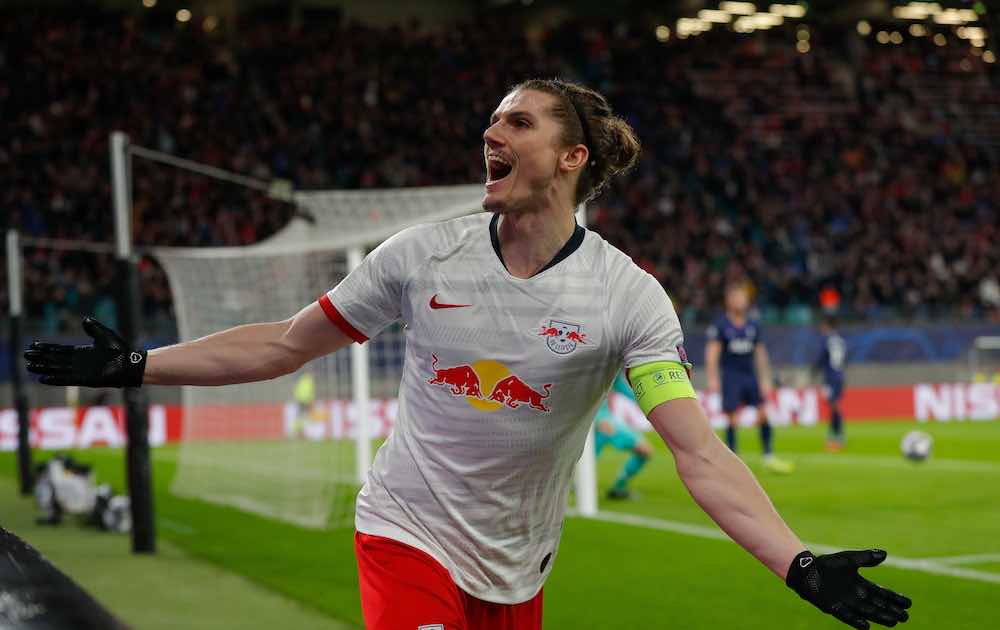 It’s little surprise that Timo Werner, with his goal-scoring exploits, has grabbed most of the headlines from Julian Nagelsmann’s title-challenging RB Leipzig side.

Indeed, mention Leipzig and Werner is the first name that comes to mind, perhaps closely followed by defender Dayot Upamecano.

However, it’s a player who’s largely flown under the radar that is having just as much influence on Nagelsmann’s Leipzig: Marcel Sabitzer.

The 26-year-old attacking midfielder turned heads and opened eyes with his scintillating display against Tottenham Hotspur in the Champions League. Leipzig’s convincing 3-0 victory at home in the second leg of their round of 16 tie became an orchestral manoeuvre under floodlights, conducted by the Austrian playmaker.

Sabitzer’s two goals not only ensured Leipzig’s progression into the quarter-final stage of the Champions League, but they also caught the attention of their opponents and their North London rivals. Both Tottenham and Arsenal are now rumoured to be interested in signing him this summer.

He began his career coming through the ranks at Admira Wacker in Mödling, Austria, before a transfer to Rapid Vienna.

It didn’t take long for him to catch the eye of the Red Bull sporting franchise, and after just one season at Rapid he was signed by RB Leipzig and sent on a season-long loan to sister-club Salzburg.

He was a part of the Leipzig team that gained promotion to the Bundesliga and has grown in influence as the team’s success has continued.

After beginning his Leipzig career in a more advanced role, he has solidified his place in an attacking midfield position. Usually operating from the right, his contributions on and off the ball have seen him play a key role under head coaches Ralph Hasenhüttl, Ralf Rangnick, and current boss Nagelsmann.

Leipzig’s high-energy style is supported out of possession by Sabitzer’s pressing ability. Once they have the ball, his slick and accurate passing is supported by the vision and anticipation required to work at high speed.

This is supported by intelligent movement and a goal threat from distance that has seen him net four of his eight Bundesliga goals from outside the box this season.

This was emphasised by the first of his two strikes against Spurs, with the second a smart near-post header and a great example of his smart movement.

If all this wasn’t enough, he also has a growing reputation from dead-ball situations. Set-piece delivery is another asset in Sabitzer’s ever-expanding arsenal.

Earlier this season, Sabitzer spoke with Bundesliga.com and told them: “From day one, I have really enjoyed implementing what the coach demands of us.

“There are lots of new things to learn, but the direction we are going and the way we want to play suits me very well.”

He added that he wanted to be “more dangerous in front of goal than last year,” something he’s already achieved.

His Leipzig coach Nagelsmann is delighted with his progress, saying: “I have always said I want more goal threat from midfield. He clearly took that both literally and personally. He’s a very important player for us.”

Sabitzer’s influence has extended to his national team, playing a key role in Austria qualifying for Euro 2020.

He would have been a player to look out for this summer, but the outbreak of the coronavirus pandemic means the tournament has been postponed to 2021.

However, once domestic football does resume he will certainly be someone to pay close attention to as Leipzig still have much to play for.

With his leadership, versatility, passing, movement, defensive contribution, goals, assists and set-piece ability; it’s easy to see why an increasing number of clubs are starting to take more note of Sabitzer, the modern-day all-action playmaker.