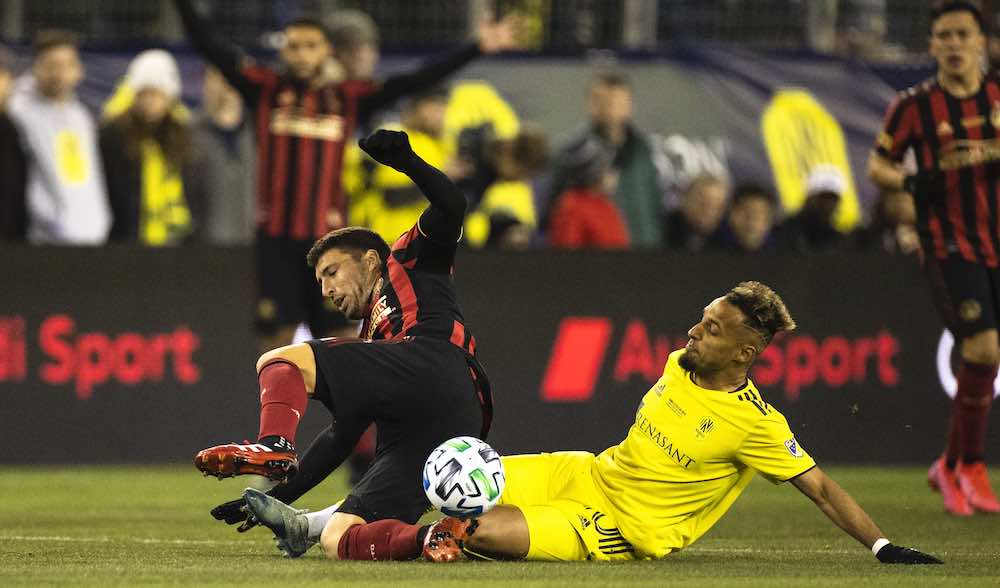 Atlanta opened the scoring through a fine individual effort from Ezequiel Barco but were pegged back by Walker Zimmerman, who now has the honour of scoring Nashville’s first-ever MLS goal.

But despite a spirited performance from Gary Smith’s men, the Five Stripes found their winner thanks to a wonderful Emerson Hyndman volley shortly before half-time — the officials initially flagged for offside in the build-up but referee Drew Fischer rightly played on having spotted the touch from a Nashville player.

It wasn’t all rosy for Frank de Boer, who lost both Franco Escobar and Josef Martinez through injury, but the Dutchman will be encouraged by a positive performance from his side nonetheless.

So, what did we learn from Saturday’s clash at Nissan Stadium?

1. Hyndman might be the man to fill Nagbe’s shoes

Atlanta lost a ton of key players during the off-season but few departures will have hurt as much as Darlington Nagbe’s — a player often described by De Boer as the “best midfielder in MLS”.

It’s been suggested over the winter that Hyndman — whose loan from Bournemouth is now permanent — is the man to fill his shoes and on Saturday’s evidence, that might just be the case.

Yes, the 23-year-old’s goal was of sublime quality, but beyond that, Hyndman gave so much more.

What a STRIKE. What a GOAL.@emersonhyndman with an absolute stunner ‼️ pic.twitter.com/CKUWK8m5dj

He wasn’t there to pick up the ball from the centre-backs and break the press a la Nagbe, but Hyndman completed a remarkable 94% of his passes on Saturday — a remarkable stat given that he attempted the fourth-highest number of passes (50) of any player on the pitch.

Furthermore, Jake Mulraney (4) was the only Atlanta player to make more tackles than Hyndman’s three, showing the midfielder is capable of that break-up play which made Nagbe so important to the Five Stripes.

His constant willingness to get high up the pitch in support of Atlanta’s front three makes Hyndman a slightly different player to Nagbe but then again, De Boer’s side are working from a different blueprint than 2019 or any other year since entering MLS.

Hyndman stitched up play with his teammates, broke down opposition moves and grabbed himself a goal. Right now, he seems like the perfect man in the middle for the Five Stripes.

From Yamil Asad for Atlanta in 2017 to Leonardo Bertone for FC Cincinnati just last season, there’s nothing quite like grabbing a first-ever MLS goal for your expansion team.

On Saturday for Nashville, that honour fell to an unlikely source in star centre-back, Zimmerman, who fired a knock-down beyond Brad Guzan to level the scores in the first half.

The USMNT international’s arrival from LAFC has raised plenty of eyebrows given his Best XI status and Supporters’ Shield success with the Black and Gold in 2019. Already, he appears to be repaying the faith shown in him by Nashville, putting his name into the club’s history books.

Gary Smith will hope Zimmerman’s influence is felt more at the other end of the pitch moving forwards but for now, he’ll just be glad to see one of his biggest signings stepping up in a big moment.

With Miles Robinson, George Bello and Edgar Castillo all sidelined already, the last thing De Boer would have wanted was to see another defender pick up an injury here — especially one of Franco Escobar’s importance.

The Argentine had already been struggling with his right leg ahead of the trip to Nashville and had to be withdrawn at half-time. His replace, Laurence Wyke, had only been signed to a four-day emergency contract earlier in the day as a result of the Five Stripes’ defender shortage and certainly wouldn’t have been expecting to get on the pitch at Nissan Stadium.

The Atlanta physio room is becoming overcrowded with defenders and with more Concacaf Champions League action coming up alongside the new MLS season, De Boer will want medical staff churning out fit players sooner rather than later.

4. …but De Boer may have a bigger problem

Of course, Escobar’s forced withdrawal might be the least of De Boer’s worries. The Dutchman will be even more concerned with Josef Martinez picking up an injury.

The Venezuelan assassin had been showing plenty of menace without truly setting the game alight against Nashville but went down midway through the second half clutching his right leg.

Serious concern for Josef Martinez. It was an awkward step that he took on the 50-50 challenge. Could be a knee. Will wait for updates. https://t.co/eQAAzjfw6Z

Atlanta fans immediately thought back to the knee injury Martinez suffered toward the end of last year’s regular season and despite the striker attempting to carry on, their fears were confirmed when he was stretchered off in the 69th minute, once again holding that right leg.

Pity Martinez and Ezequiel Barco have both shown plenty of goalscoring and playmaking prowess in the Concacaf Champions League — and in this one with Barco’s opener. However, Atlanta’s front three has looked like a well-oiled machine, with each part complementing the other. There’s every chance that taking Josef Martinez out of the equation makes the whole thing collapse, he’s that important to Atlanta.

With Atlanta and LAFC completely redefining what it is to be an expansion team with their immense success, it’s easy to forget these opening games and debut seasons aren’t supposed to be a cakewalk.

Across world football, any side entering a higher division tends to struggle against a more illustrious opponent than they’re used to. In the USA, these newcomers are often playing their first-ever competitive game as a club or working their way through the numerous issues that arise from building a roster from scratch.

That breaks the attendance record for soccer in Tennessee.

Despite the near-60,000 strong crowd at Nissan Stadium, Lzzy Hale’s pre-game guitar performance and all the other hype surrounding this match, Nashville were brought back down to earth with a bump by an incredibly professional Atlanta performance.

Sure, they defended resolutely and yes, they did hit the post in the second half. But for long stretches of this one, they were either second-best to Atlanta, or couldn’t muster that extra level of quality required in the final third to win an MLS match — especially during the final quarter, where Nashville started to mount considerable pressure on Guzan’s box but couldn’t fashion enough of a meaningful chance.

It’s going to be a long old regular season and Nashville will have plenty of chances to pick up points against admittedly easier opposition than Atlanta. We don’t see them having a ‘Cincinnati 2019’ expansion season. For now, though, it’s time to reflect on a frustrating evening and get back on the training ground to prepare for Portland Timbers.