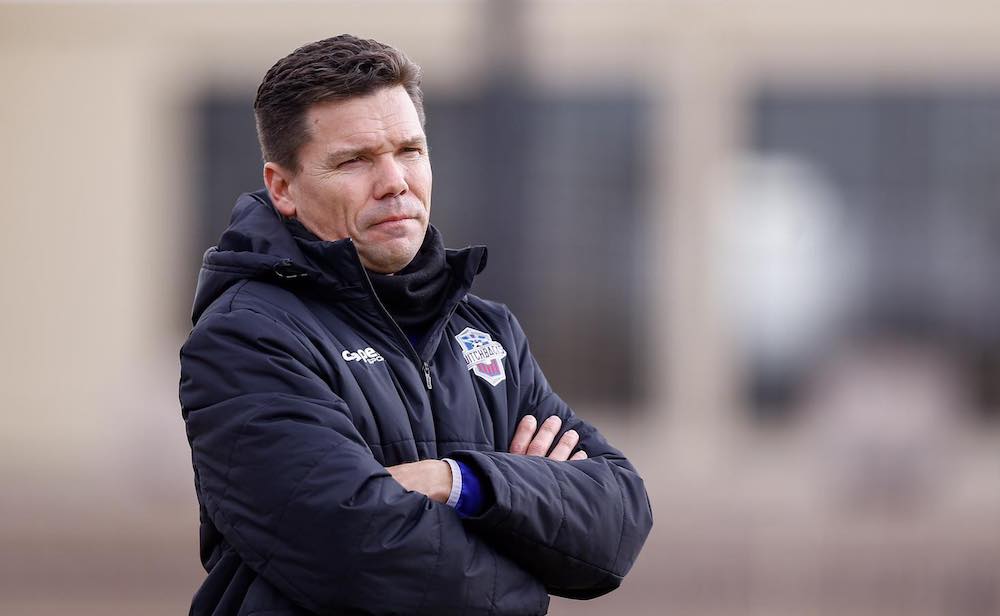 Originally from South Africa, what made you fall in love with soccer and not rugby? The sport that is most successful over there.

“I loved all sports growing up. I played soccer, rugby, cricket, did karate, ran track and cross country, but soccer was always my love.

“My Dad played, and I grew up around soccer fields in Durban and Cape Town. I would either be at my own games, his games, or we would go watch Amazulu or Manning Rangers in the stadium together.

“I liked rugby and still follow Westville Boys High School and the Sharks. I still support both the Springboks and Bafana Bafana as often as possible.”

Relive your time with the Vancouver Whitecaps

I was fortunate to join the Whitecaps as a scout in 2014 while I was still coaching at Simon Fraser University. I had previously coached the Women’s team in 2009 and Gordon Forrest, who was with the residency program at the time, had re-introduced me to the club.

“I began by scouting for the MLS draft and felt like we hit the jackpot in the 2015 draft by picking Tim Parker with the 13th pick of the first round, and Spencer Richey in the third round. I think it was my attention to detail in the scouting process that enticed Carl Robinson to bring me on to his staff.

“My time leading the USL squad and being around the first team was an opportunity that I was incredibly grateful to have been given. I think what we did with Whitecaps2 was a big part of building and growing the club at that time.

“I look back very fondly at helping to develop Alphonso Davies and giving him his professional debut, but also how we took such a young team (and on a low budget) to the USL Western Conference final in 2016.”

In your view, who is the next ‘Mark Anthony Kaye’ to come from USL to the Canadian men’s national team that people may not be looking at?

“I love MAK. I think he’s a great guy, and a quality player. I wasn’t happy when he scored against us at Los Angeles, though, last season, but I thoroughly have enjoyed coaching against him in USL and MLS.

“People forget very quickly that he was on the bench for several games at Louisville a few years ago and was then starting week in and week out with LAFC the next season. His mentality is what separates him from others, and he is very deserving of being a MLS All-Star.

“I believe that there are several future Mark-Anthonys in Canada. There are a few potential candidates floating around the USL, you just need to find them, and then mold them into top talents.”

Having spent time in Germany and Ireland Was Nippert Stadium’s atmosphere bigger or at the same level than let’s say a top european football match?

“It would be unfair to compare the atmosphere at Nippert Stadium to Dortmund or another top European atmosphere, but it is very special. It’s not only the in-match experience but also the pre-match march. I used to go out briefly in the warm-up to check on the pulse of our team, but as I would be going back in to the change-room, you could hear and see thousands of the fans coming into the stadium well before the match.

“It is a major positive for the club that the ownership group are now heavily investing in the team. When investment was there in the USL, we won the club their only ever piece of silverware. So I would anticipate and hope that this is the same for them in MLS.”

Making it to Major League Soccer and even more special being with an expansion club like FC Cincinnati where you had a lot of eyes on you – always a challenge to go to a higher level – did you feel you let the opportunity slip Or was it an experience you’ll never forget?

“I’ll never forget being an MLS head coach. I had sat on the bench for a few games as an assistant with Vancouver, but to lead a team into the league as an expansion franchise was a once in a lifetime opportunity.

“We knew going into the season that the first 11 games were going to be the hardest part of the schedule against 9 teams that made the play-offs the year before, and 7 games were on the road. It was a challenge that became too much for some to take and, as it often happens, the head coach has to be the scapegoat.

“I harbour no negative feelings any more and I was glad to have gone through the experience. I’ve grown and learnt a lot from the experience, and am a better person and coach because of having to endure the experience.

“Being dismissed there was the first time I have been dismissed in my now two decades of coaching. In many respects, I wish I had gone through this earlier in my career. It forces you to reflect in a way that no other experience can. I just don’t want to go through it again!” 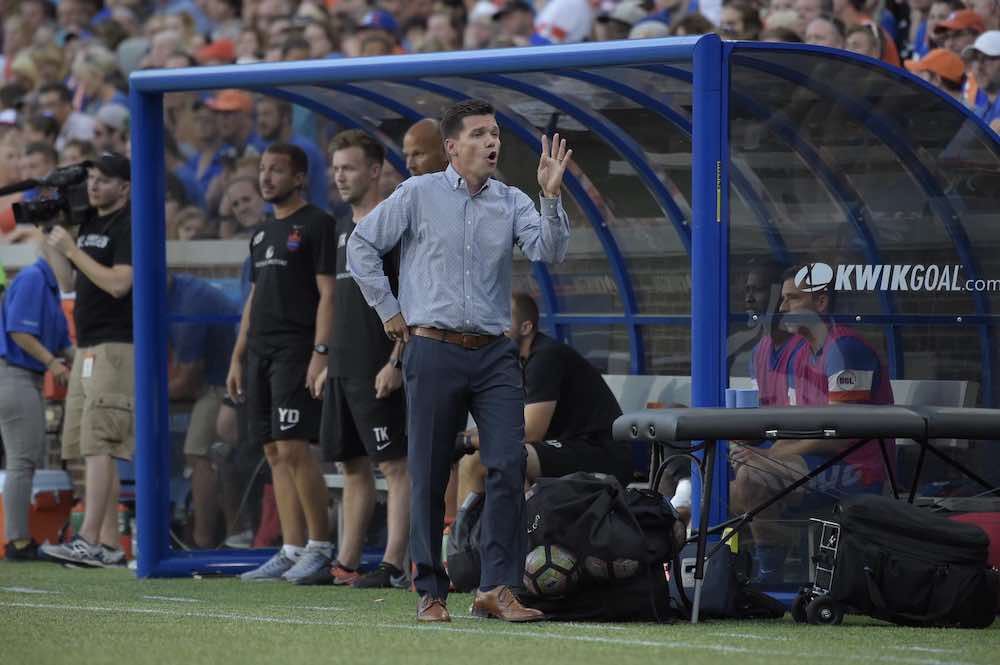 What made the move to Switchbacks appealing? Why choose it over other opportunities?

“I received several interesting opportunities in the five months I was out of the game. Some were in some obscure footballing nations. This is a story for another day! I also had a few international national team conversations, but at this time I’d rather be involved more in the day to day of club coaching.

“When I was flown to Colorado, I met good people, found a beautiful city, and was presented with the carrot of opening a new stadium. This stadium will be ready next season and will be one of the nicest settings for soccer in North America. The stadium will be downtown and has the Rocky Mountains as its backdrop.

“Most importantly though here I am surrounded by staff that are motivated, positive, and all pulling in the same direction. It is a refreshing work environment and I am very excited to be part of the project.”

Tell me why do you believe in the Canadian players. You have Sean Melvin, Aidan Daniels, and Mamadi Camara at Colorado Springs, and before, Mark Village and Marco Dominguez at FC Cincinnati.

“I am a proud Canadian and Canada gave my family a chance of a new life in the nineties and I will forever be grateful for that.

“In terms of players, I think that Sean, Aidan and Mamadi all have bright futures. They have all had prior experience with MLS teams and I think we have not seen the best of them yet.

“I am hopeful that we can help them improve and have success with the Switchbacks, but like with all the players I coach, I’d love to see them go on to bigger and better things in the future.”

What will the USL domestic rule changes do now for Canadian players? Limit professional playing opportunities?

“This rule change will limit opportunities for Canadian players. I think the CPL is excellent for Canadians, but there are currently only eight teams. This business is highly competitive, but the cream rises to the top, and Canadian players will need to embrace this to take international roster spots on USL rosters.”

What are you and your staff as well as players doing during this COVID-19 pandemic to stay busy?

“We are spending our time keeping our players engaged and motivated for the restart of the season. We are also using the quieter time to challenge the players with tactical assignments that they can complete remotely.

“We are also working on our own personal development by taking courses, doing podcasts, and also an extensive review and planning exercise of what works and what could be improved with our current setup with the Switchbacks.”

Would you like to coach at some point down the line in the CPL? As well as what do you think the league will do for the overall development of Canadian coaches

“I’d love to coach in the CPL at some stage. Timing is everything in life though. I feel like I play my part in developing Canadian players, but am content working in the US at this time.

“Life and the career of a professional coach are a journey and you never know where it will take you. I am fortunate that I have a supportive wife and family, and we will see what transpires in the future. I, like many, am excited by the CPL and will continue to follow the league very closely.”

You’ve now coached professionally for six years. What would you say to an aspiring coach?

“I’ve been coaching as a full-time coach now for 20 years. It is not the level or the team that you coach that matters, but the level of personal commitment and passion that you put into your job.

“What is different in the professional game is the willingness to take a gamble on yourself. I would recommend to any aspiring coach to go coach as many sessions as they can.

“Challenge yourself, coach players that don’t speak your language, put yourself in situations where you have to adapt and evolve.

“Do all of this and then if you want to go coach in the professional game, be prepared to sacrifice and take risks. This is not a profession or career where you control everything.

“Most importantly though, remember the game is about the players. Push them, shape them, mold them, and most importantly enjoy the game that gives us all so much. Have fun on the rollercoaster.”

Loading...
Newer Post
Charlie Gilmour On The Privilege Of Playing For Arsenal, Signing For Norwich & Netherlands Life With Telstar
Older Post
Borussia Dortmund’s Emre Can Is The Player Germany Need