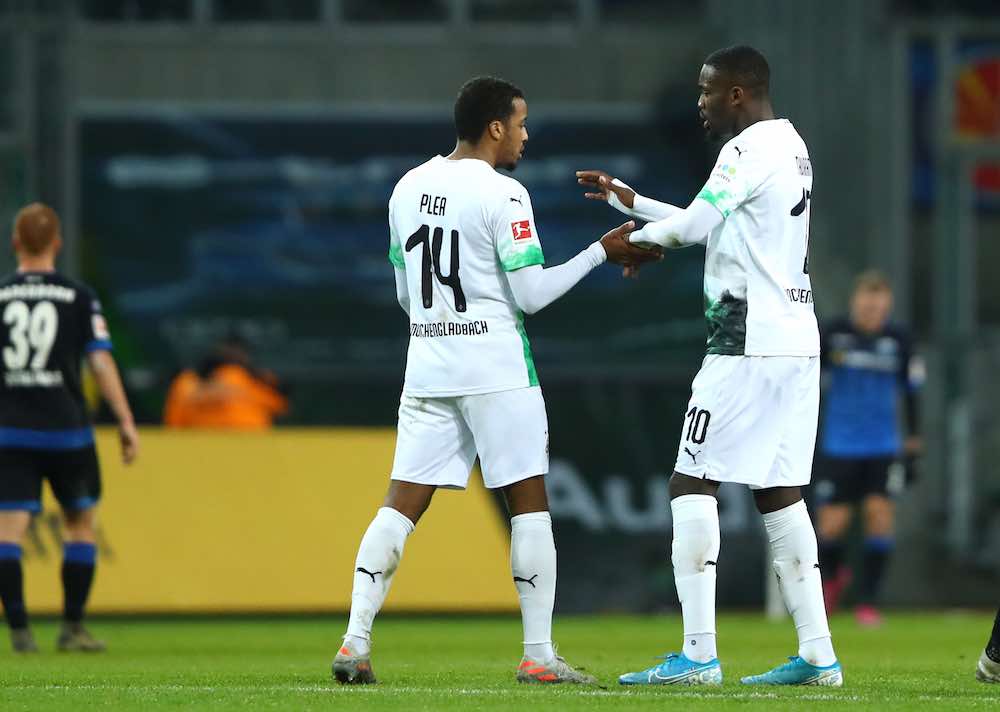 Two teams heading in opposite directions in the Bundesliga met on Sunday afternoon, and the game showcased a strike duo whose side are heading for Champions League qualification as it stands.

Borussia Mönchengladbach put in a strong performance against Union Berlin, taking three points in a 4-1 win.

After being promoted to the Bundesliga for the first time in their history last year, Union Berlin surprised many with their impressive start to the season which saw them sitting around mid-table at the beginning of 2020.

They have struggled since the league restarted, though, and are now just four points above Fortuna Düsseldorf who currently sit in the relegation playoff place.

But the big talking point here was the performances of Marcus Thuram and Alassane Pléa, who eventually stole the spotlight from Florian Neuhaus who opened the scoring with a beautiful individual effort. Thuram and Plea each combined for three goals helping their club return to winning ways.

Thuram And Pléa Too Much For Union To Handle

Right from the start of the match, Thuram was too much for the Union Berlin defence to handle, and finished the game with two goals.

The chemistry between Pléa and Thuram was on display for the second goal of the game. Pléa received a pass in space on the left, cutting in before crossing for Thuram who had already made his run into the box.

The forward was perfectly positioned behind Union Berlin centre-back Neven Subotic and made no mistake with his convincing header.

After the goal, Thuram took a knee to pay his respects to George Floyd  — a beautiful moment of respect.

Pléa also had a superb day, finishing with a goal and two assists. He showed a great touch with his passing, made great runs into the box, and was able to find the space to separate himself from defenders.

Combined for five goal contributions between them, often helping each other, Thuram and Pléa were too much for Union Berlin to handle.

Union Berlin are now winless in their past five Bundesliga matches. The club has struggled to win matches away from home this season, with just three victories on the road, with only Frankfurt, Paderborn, and Düsseldorf worse on their travels.

Additionally, in their last five games, Union have only scored three goals but conceded 14 — a trend which will need to be fixed immediately if they are to turn things around.

Urs Fischer’s men did start the match well, though, and were only down 2-0 at half time, but mistakes continue to hurt them.

If they are to remain in the Bundesliga, Fischer will need to change his tactics, as his team has become too predictable, and will need to shore up his backline which continues to hurt their chances of winning games.

The win moved the home side into third, trailing second-place Borussia Dortmund by one point. They also have Bayer Leverkusen, and RB Leipzig who play on Monday evening, separated by one point.

Gladbach ended a two-game winless streak and hope to continue this for as they look to solidify this Champions League spot.

With three spots up for grabs, as FC Bayern look destined for first place and their eighth consecutive Bundesliga title, it will be an intense race until the final game of the season when one club will miss out.

With Thuram and Pléa each finding their form at the right time, and the club putting a full complete effort against Union Berlin, this could be the game which sets Gladbach on the right path for a strong finish.