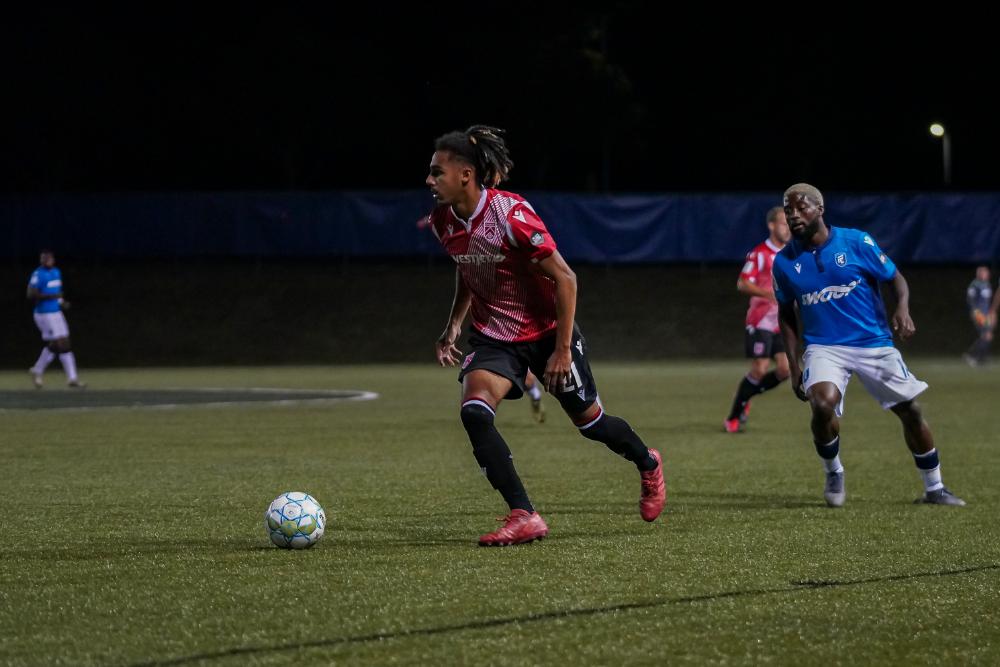 Cavalry FC extended their unbeaten start to the Canadian Premier League’s Island Games with a 2-0 win over FC Edmonton on Friday. Once again, Mohamed Farsi was among the star performers.

Having previously secured four points with a draw against reigning CPL champions Forge FC and a 2-0 victory against Valour FC, the Cavs have quickly become the side to beat on Edward Island.

Much of their impressive form so far has been thanks to the dynamic performances put in by off-season right-back arrival Farsi, who notched an assist and won a penalty against Forge FC — earning a spot in the Best XI for the opening week in the process — while he also provided the cross which led to Jordan Brown’s opener in the win over Edmonton.

He was influential again during @CPLCavalryFC 2-0 Edmonton, providing the cross which led to the opener & drawing a red card from Mohammed

Another young 🇨🇦 to watch

Fellow Canadian full-back Alphonso Davies is turning just about every head he passes by in Europe with his performances for Bayern Munich since moving from Vancouver Whitecaps in January 2019, while even in Major League Soccer, right-back Richie Laryea has been consistently improving for Toronto FC.

While it would be incredibly premature to compare Farsi to these established Canada internationals, his story so far does represent one of the many success stories of a league in only its second season.

With the absence of a professional league, it can be quite painful to think about the amount of potential Davies, Laryeas or Jonathan Davids that have fallen through the cracks over the years but Farsi, who Cavalry manager Tommy Wheeldon Jr admitted had already been offered out to the likes of Edmonton and Valour before even trialling in Calgary, is living proof that talent need no longer be wasted in Canada.

“I think why Farsi slipped through the cracks was, prior to the CPL, there weren’t many professional clubs [in Canada],” the Liverpool-born tactician told reporters following the win over Edmonton.

“You’ve got three MLS clubs, prior to that you had Edmonton and Ottawa playing in the NASL, and then it gets watered down to League1 Ontario, semi-pro, the PLSQ in Quebec, then you had the USL American leagues that we played in with the Calgary Foothills.

“So you end up having this underbelly and like we’ve shown with [Dominick] Zator and [Nico] Pasquotti, [Elijah] Adekugbe, players like that perhaps would have fallen through the cracks too had we not had the Canadian Premier League and brought them into the Cavalry, there are lots of them out there. What’s wonderful about this league is it’s creating opportunities for players, coaches, journalists, media, for everybody and I’m a big fan of that.”

Even as far as trialists in the Canadian Premier League go, Farsi’s story is a unique one and in fact, the 20-year-old had already left Canada in search of opportunities before Cavalry got in touch. However, once he did speak to Wheeldon Jr, there was no doubting he would fit right in with last season’s CPL runners-up.

“We invited him into a training camp after analysing his game and we were contacted by an agent,” Wheeldon Jr added. “We liked the look of him and like with all players, I have three good reference checks: people who have coached him, played with him and played against him, then I call the player himself.

“Once I had a good face-to-face with him over facetime — he was in Algeria at the time because he’d left Blainville to go and try his luck in his heritage country — I liked his tone, I liked the hunger that came from his voice, his willingness to want to prove people wrong, that he is ready.”

Farsi began playing soccer aged eight and originally came through at LSEQ side, CS Panellinios. From there, be bounced around various clubs in the region, including Longueuil and Blainville, while he honed his technical skills by featuring for the Canadian Futsal team.

None of the aforementioned teams saw fit to keep Farsi tied down but so far for Cavalry, the right-back has already shown the pace, tenacity and quality of end product to suggest he can not only sustain this early success in the CPL, but also translate that to a higher level in the future.

Wheeldon Jr believes Farsi’s early setbacks were just a result of him being a little late to blossom, stating that his ‘hunger and desire’ will stand his development in good stead.

“I think he’s just a late bloomer,” he added. “He played for the Candian Futsal national team, so we knew he had great technique but it’s his hunger and desire and, above all else, he’s humble. So we knew he was the right personality and the right type of player to help us evolve, which I think we are doing.

“I always tell people who are coming in to trial, to do something well early and repeat it. You’ve got to stand out and have our eyes on you.

“He’s got this great image about him with his hair and the way he runs. He was catching our eye time and time again, so we knew. We had him in for two weeks but signed him after one, it was like a done deal because we’d seen enough that we just knew he was right for us.”

Even though it’s barely over a year old, the Canadian Premier League is already planning to expand well beyond the eight teams which currently occupy its ranks, and it already has one major success story with the $300k transfer of Tristan Borges to Belgian side OH Leuven — recently promoted to the first tier — after scoring 13 goals in 33 appearances for Forge FC last season.

Add to that the fact that Atletico Ottawa — backed by La Liga giants Atletico Madrid — entered this season and you have a sure sign of how much interest is being generated within footballing corridors.

The discovery, development and transfer of players like Borges is exactly why the league was founded in the first place and as CPL grows in the coming years, one can only hope players like Farsi can follow in his footsteps, making the jump to Europe, Major League Soccer and beyond.