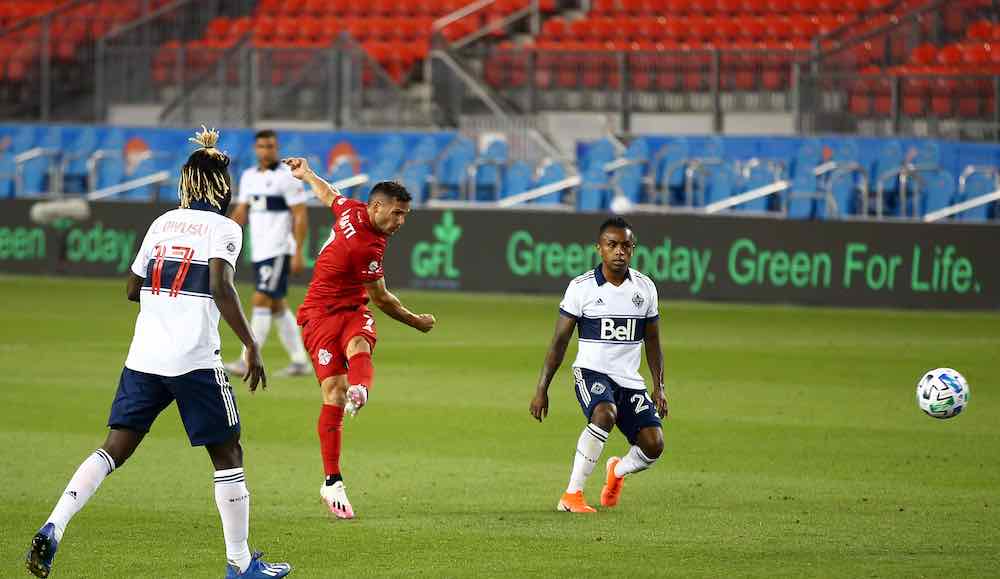 Back at home on their own pitch for the first time in five months, Toronto FC comfortably defeated their Canadian counterpart, the Vancouver Whitecaps, 3-0 on Tuesday evening.

Pablo Piatti got things started for TFC with a left-footed golazo from distance in the 27th minute, his first goal for the club since signing in the offseason.

It was the Argentine winger finding the back of the net once again in the 55th minute with a cool finish in the box to complete his brace.

What a home debut for Pablo Piatti. #TFCLive pic.twitter.com/FL2QzymKo2

Just minutes after coming off the bench, substitute Nick DeLeon secured all three points for the Reds, putting a beautifully curled effort beyond Whitecaps keeper Thomas Hasal in the 83rd minute to put the game out of reach.

Ultimately, traffic was one-way from start to finish as Vancouver failed to make their mark against a dominant Toronto side on the night.

Was the Whitecaps abysmal effort a sign of their own shortcomings or their opponents’ superiority? Here are a couple of the key things we learned in this one.

Piatti Proving His Worth As A DP

After missing the opening two matches of the season through injury, Piatti began to show signs during the MLS is Back tournament of the player who has made his mark on La Liga in the past decade.

Although his performances in Orlando garnered excitement among the TFC faithful, it was end product and goal production that Greg Vanney and the Toronto front office envisioned when they brought the 31-year-old in from Espanyol.

Against the Whitecaps, Piatti provided exactly that, scoring the opening goal in a moment of individual brilliance, exactly the type of moment you need from your designated players in Major League Soccer.

Deployed as an inverted winger drifting inside from the right flank to lend his wand of a left foot to the TFC attack, he popped up at the back post to add an insurance goal just before the hour mark.

Would be a major boost for #TFCLive if he can consistently provide a goal-threat, in addition to his sharp combination play. pic.twitter.com/3Tx4ZsAd8f

With a history of injury issues and a lack of match fitness in recent memory, Toronto has been mindful of overloading their offseason addition, with Piatti yet to play a full 90’ to date. If the Argentine attacker can continue to put games out of reach with time to spare on a consistent basis, managing his minutes should be a non-issue for Greg Vanney and Co.

While TFC deserves full marks for taking advantage of the occasion, the Whitecaps negative tactics allowed their opponent to play the majority of the match on the front foot.

For as strong as a side as Toronto have, their two biggest flaws were clear in their defeat against NYCFC last month in Orlando: a failure to break the press and play out the back under pressure and a lack of pace at centre-back, showing vulnerability in quick transition and counter-attacking scenarios.

After a lively five minutes to start, Vancouver failed to put pressure on the Reds as they built out of the back. Lucas Cavallini was often a one-man pressing machine and simply couldn’t continue to cover the ground with the rest of his teammates content to sit back and allow for Toronto to gain the halfway line with ease.

#VWFC had 26% possession tonight against #TFCLive, and only 4 shots, 1 of which found the target. They were outpassed 849 to 279

Long forgotten among Dos Santos’ group was the success they had playing on the counter during their last couple of matches in the MLS is Back tournament. While they were always going to see less of the ball than TFC, they failed to capitalize on the lack of pace within Toronto’s defensive line.

Their only shot on target in the match came in the 48th minute from a route one through ball played directly from Caps defender Andy Rose between the two TFC center-backs, allowing Cavallini to break in and force a strong save from Quentin Westberg. The issue was not the lack of conversion but the fact that an attempt to replicate this instance didn’t come in the forty minutes to follow.

In the end, spending most of the game in a low-block and looking to play out of the back against a relentless Reds side spelled disaster for the Caps in this one.

Loading...
Newer Post
Kevin van Diermen On Grappling With Luca Toni And The Influence Of Aad de Mos
Older Post
Barcelona Are In Dire Need Of A Reset After Bayern Drubbing