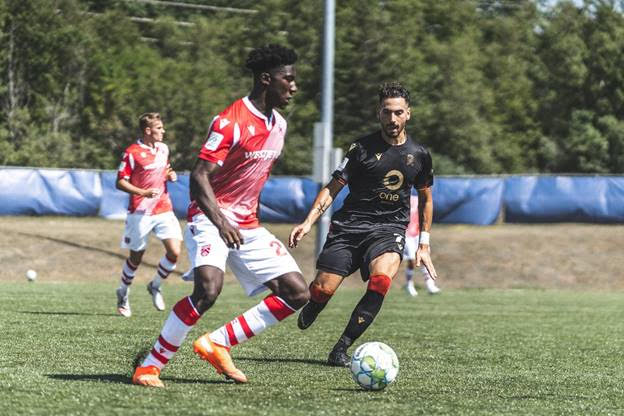 Following the trial, the Yorkshire club managed by Chris Wilder has the option to sign Pepple on a permanent deal should the 6-foot tall teenager do enough – an option the Blades may be seriously considering after their woeful start to the new season.

Cavalry FC has agreed to a two-week trial with a view to a permanent move for Aribim Pepple (CAN) with English Premiership club Sheffield United FC.

“This is a fantastic opportunity for Aribim, whose pace, power and potential have caught the eye of a number of overseas clubs this year,” Cavalry manager Tommy Wheeldon Jr said.

“He is still developing his game and we often forget he is only 17 years old due to the maturity he shows in both his physical appearance and character. He has a very high ceiling in terms of potential that we feel this is the perfect opportunity for him to go overseas where the English season has only just begun.”

Pepple, born in Kettering, England, has represented Canada at the U-17 level. The youngster moved to Calgary when he was just five with his family.

After enjoying an impressive youth career, including four goals in 12 appearances for Calgary Foothills in the USL League Two, the talented forward confirmed his signing with Cavalry last summer and made his debut in a 0-0 draw with HFX Wanderers back in August 2019.

The striker also made six appearances during the recent Island Games, although the forward is yet to get off the mark in his 15 appearances in all competitions with the Cavs.

United have lost all four of their opening matches and have only scored once in the league going into the international break. Chris Wilder was recently boosted by the signing of Rhian Brewsdrer from Premier League champions Liverpool, however, he could now add more firepower in the shape of the Canadian Under-17 international Pepple.

This will be a great experience for the kid & further proof that clubs are watching the talent developing in the Canadian Premier League! #CanPL🍁

Should he do enough during the two weeks to impress the coaching staff and convince the club to sign him permanently, it is likely the majority of his football would come in the under-23 ranks as well as perhaps the odd cup outing for now.

It’s a tall order for such a young player to make an impression at a Premier League club, but the talent coming out of North America right now is defying all expectations.

A move to arguably the biggest league in the world for an adopted Canadian youngster just two seasons into the inception of the Canadian Premier League is a major nod towards the standard of the competition.

Moves to European leagues are often the benchmark for these types of leagues, certainly in the early days, and a potential switch to Sheffield Untied for Pepple could be another feather in the Canadian cap after Tristan Borges’ switch to Belgian top-flight side, OH Leuven, last year.