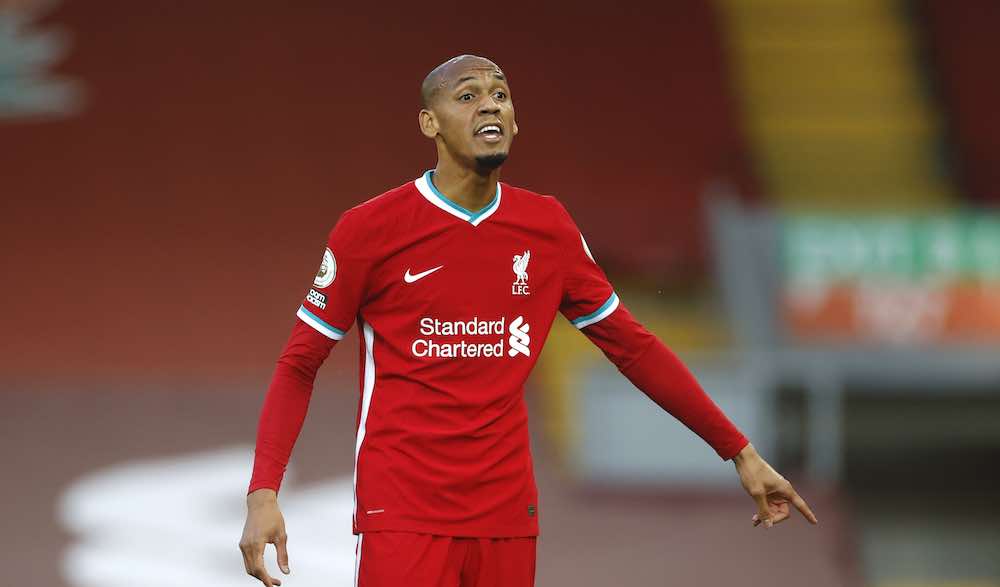 The Dutchman may have ended up walking off the pitch, but there was a look on his face that suggested he was also aware of the severity of the injury.

In an instant, the entire Premier League title race took an almighty twist, such is Van Dijk’s reputation as not only the most influential player in England, but arguably the world.

With Lionel Messi and Cristiano Ronaldo slipping ever so slightly past the absolute peak of their powers, are they really more important to the respective causes of Barcelona and Juventus than Van Dijk is to Liverpool’s?

In the 29-year-old’s absence, Jurgen Klopp is left with Joel Matip and Joe Gomez as natural centre-back options. That’s until the January transfer window at least, when Ozan Kabak or Dayot Upamecano could potentially come in.

However, the Liverpool manager always had a plan were he to find himself in this unfortunate situation with a centre-back out for an extended period of time. That plan was Fabinho.

The Brazilian has been a colossal performer for the Reds since joining from Monaco in 2018, mastering the No.6 role in a manner nobody has at Anfield since Javier Mascherano. The Reds’ “lighthouse”, as he was once described by assistant manager Pep Lijnders, is a priceless individual.

He’s a footballer brimming with intelligence, quality on the ball and immaculate positional sense, and while others such as Van Dijk, Alisson, Mohamed Salah and Sadio Mane may have earned more plaudits and headlines, Fabinho has been, on the quiet, a key reason for Liverpool’s legendary period of success.

One of his greatest strengths is his versatility. The 27-year-old often played as a right-back during his Monaco days, and has also done so at international level for Brazil. As well as this, he has slotted seamlessly into a centre-back role on a handful of occasions for Liverpool already.

Before the Sheffield United game at the weekend, he had kept four clean sheets in the five matches he had started in the middle of the defence for the club, which speaks volumes.

While some have considered Fabinho a far from ideal defensive option (there is also the argument that taking him out of midfield weakens the team), this season has proved that he may even be the Reds’ standout centre-back after Van Dijk, with all due respect to Gomez and Matip.

Used alongside Van Dijk in the 2-0 win at Chelsea last month, the Brazil international rightly scooped various Man of the Match awards, nullifying the threat of Timo Werner and looking like a polished centre-back with bags of experience in the position.

A 97% pass completion rate saw Fabinho deliver a masterclass on the ball, with five successful long balls completed. Three successful tackles made out of four attempted showed he excelled in the defensive aspects of the game, too.

Van Dijk’s injury has meant Fabinho’s Stamford Bridge audition was no one-off in 2020/21, and he now looks set to be a regular in defence this season, especially with Matip such an injury-prone figure.

On Wednesday, he was Liverpool’s standout performer away to Ajax in the Champions League, producing an acrobatic goal-line clearance to preserve the Reds’ clean sheet.

He organised the troops superbly from the off, and ensured the headlines weren’t about Jürgen Klopp’s men collapsing without Van Dijk around. He won eight out of his 10 duels at the Johan Cruyff Arena, and also made nine clearances as Liverpool battled their way to a gritty three points.

While Fabinho wasn’t at his all-conquering best in Saturday’s 2-1 win over Sheffield United, he was still a commanding figure, once again proving that he is a man to trust at centre-back for the foreseeable future.

Starting him there doesn’t feel like Klopp is attempting to fit a square peg into a round hole — he already looks at home. Rather than going with a Matip and Gomez centre-back partnership, Fabinho plus one looks like the strongest option for Liverpool.

The downside, as mentioned, is that taking Fabinho away from midfield does impact Liverpool in that area, as demonstrated against the Blades. Gini Wijnaldum and Jordan Henderson didn’t quite work in a double pivot, and Fabinho’s physicality and tactical nous would have made the Reds more secure in that area.

Liverpool’s midfield is packed with top-class options, though, so for the time being it makes more sense to view Fabinho as a centre-back.

He is such a high-calibre level of player that you wouldn’t be surprised to see him end the season as the Reds’ Player of the Year, despite being shifted to a relatively unknown role, and Brazil manager Tite may even consider him to partner Marquinhos in defence at international level once 36-year-old Thiago Silva hangs up his boots.

Van Dijk’s absence is enormous, and there will be times when Liverpool suffer because of it, but in Fabinho they have a true warrior who can help fill that void for the remainder of the campaign.