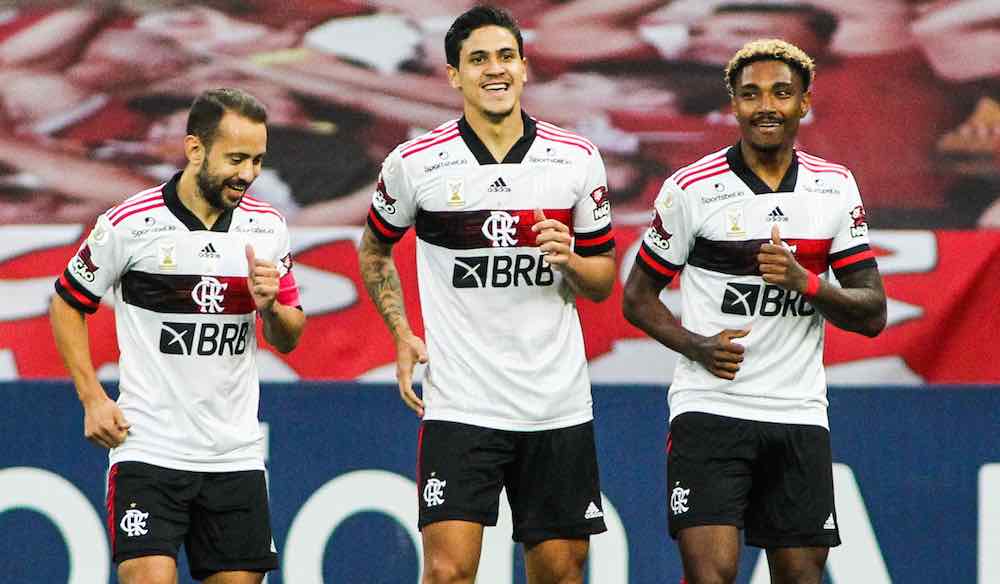 Internacional hosted Flamengo on Sunday evening in a top-of-the-table Brasileirão clash. With both sides having previously played 17 league games, they were coming into this one level on points, with Inter edging Flamengo on goal difference.

24 hours before the match, Atlético Mineiro had the chance to claim top spot but failed to overcome Sport Recife at home. This result meant either side in Porto Alegre could add to their slight points advantage over Galo (who, it should be noted, have a game in hand).

Inter made eight changes to their lineup from the one that lost in midweek away to Universidad Católica in the Copa Libertadores. As a minor miracle would have been required to prevent Inter from qualifying for the knockout stage, manager Eduardo Coudet took the opportunity to rest players in Chile ahead of the game against Flamengo.

They, in turn, were also in Libertadores action during the week, gaining a more positive result: a 3-1 win over Colombian outfit Junior. Rubro-Negro had already been guaranteed first place in their group after matchday five so, like Inter, opted to rest players — only Willian Arão and Vitinho started both in midweek and at the weekend. 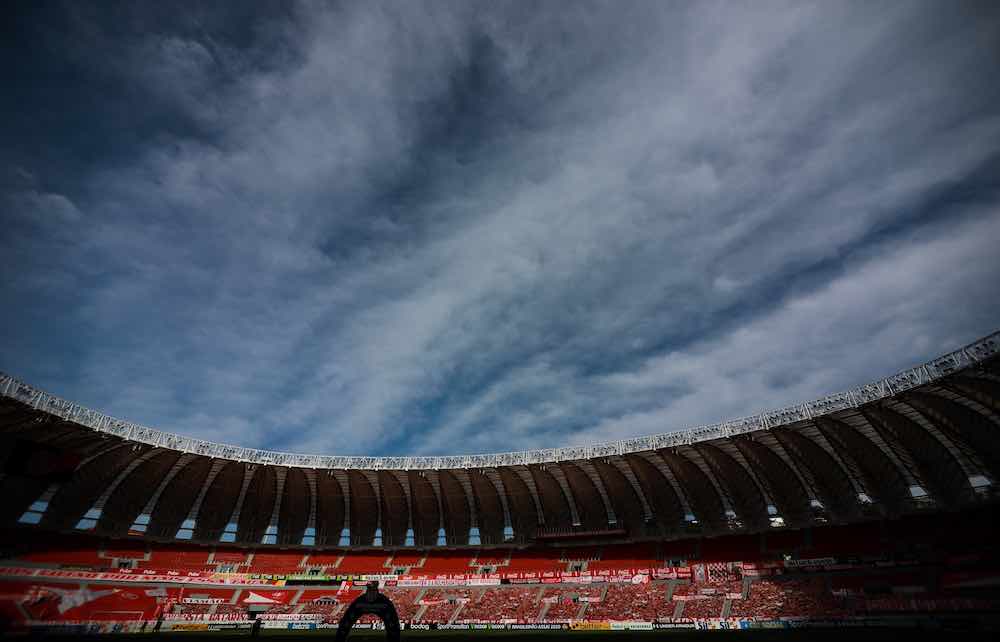 Initially at the Estádio Beira-Rio it was Inter who seemed the fresher of the two sides, as they came out of the blocks flying, having two glorious chances in the opening moments of the game.

First, a perfect cross from Heitor found the head of Abel Hernández, whose effort went wide when it really should have gone in the back of the net. Then Heitor was involved again when his low strike was saved by Hugo Souza, who got down well to deny the full-back.

It would be third time lucky for the Porto Alegre side. Mauricio Isla was too lackadaisical in possession, so Patrick hunted him down like a hyena before placing the ball on a plate for Hernández. The Uruguayan striker thus put his earlier miss behind him to give Inter the perfect start after just seven minutes.

The saying goes, “you’re at your most vulnerable when you have just scored”, and that was certainly the case for Inter who switched off four minutes later. This allowed Pedro to drive forward and part the home defence like the Red Sea, ultimately firing his shot past Marcelo Lomba into the bottom right corner.

After this hectic opening, the match calmed down somewhat with both sides working hard to create further chances. This more sedate pace didn’t last, however, as some formidable high pressing by Inter paved the way for them to regain the lead in the 25th minute.

Gustavo Henrique was swarmed by the Inter press, squandering possession and gifting the ball to Thiago Galhardo, who showed great composure to place the ball past Souza.

Moments before half time, Galhardo had the ball in the net again. Unfortunately for him, however, he timed his run a little too early and was correctly flagged offside. Nevertheless, his side went into the break with a 2-1 lead.

The second half was dominated by the boys from Rio de Janeiro, who didn’t waste time in pushing for an equaliser, with an early acrobatic attempt by Pedro going over from barely ten yards out.

They came much closer in the 58th minute: after some great work by Isla to find Pedro, the latter’s effort was parried out by Lomba; the follow-up was then cannoned by Filipe Luís against the crossbar. This was undoubtedly a spectacular strike, but when he looks back at it he will be disappointed that he didn’t find the net.

Early after the restart, Inter did also hit the woodwork. This came via a well-struck effort from Marcos Guilherme, but the home side’s only other chance of note in this period occurred just after the hour mark, when a low shot by Patrick whistled past the post.

Instead, Flamengo continued to probe Inter’s goal, but when Vitinho and Pedro saw their respective efforts cleared off the line in quick succession, Catalan coach Domènec Torrent must have thought it wasn’t going to be his team’s night. However, their never-say-die attitude was to pay off in the game’s dying moments.

Deep into stoppage time, Gerson dribbled at the edge of the area before his lovely chipped ball found the head of Éverton Ribeiro, who nodded home his sixth headed goal for Flamengo, giving the club a vital away point.

Despite this late equaliser, post-match Torrent wasn’t happy about picking up a solitary point.

“I think it’s clear that Flamengo are never satisfied with a draw. I think we lost two points. We said that the draw was not enough, that we wanted the three points,” he said.

“I think we created a lot of opportunities in the second half. We lost two points,” he added. 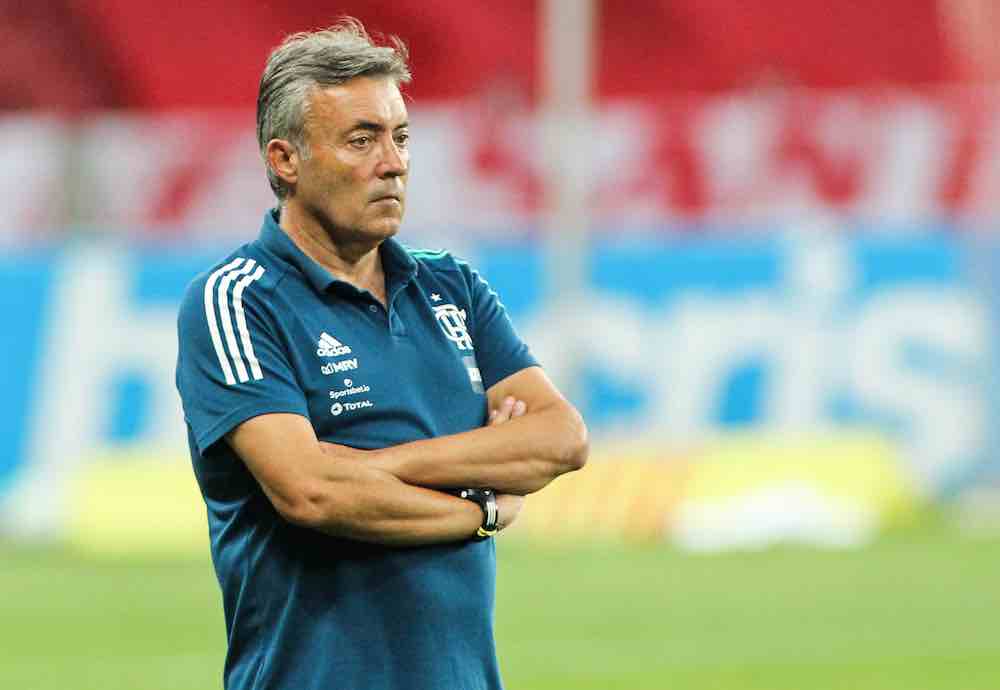 Torrent did, however, pay tribute to his squad for not giving up.

“We don’t have 18 players, we have 22, 23. Everyone is ready to help. They have shown again that they have the desire to win trophies again and we will fight until the end for that.”

On the Inter side of things, one of their best performers, Patrick, spoke about the positives and negatives from the match.

“We had a good first half. In the second they had more rhythm; we had the opportunity to kill the game on the counterattack, but we couldn’t,” he said.

“Seven minutes of stoppage time is a bit much, but we have to raise our heads. We are coming away happy with the team’s performance,” he asserted.

The match was unquestionably a great spectacle. However, one man who will be glad to see the back of it is referee Wilton Pereira Sampaio, who dished out a total of 13 yellow cards — including one to both of the managers.

The two sides now turn their attention to midweek Copa Do Brasil action, with Flamengo away at Athletico Paranaense and Inter travelling to Atlético Goianiense.