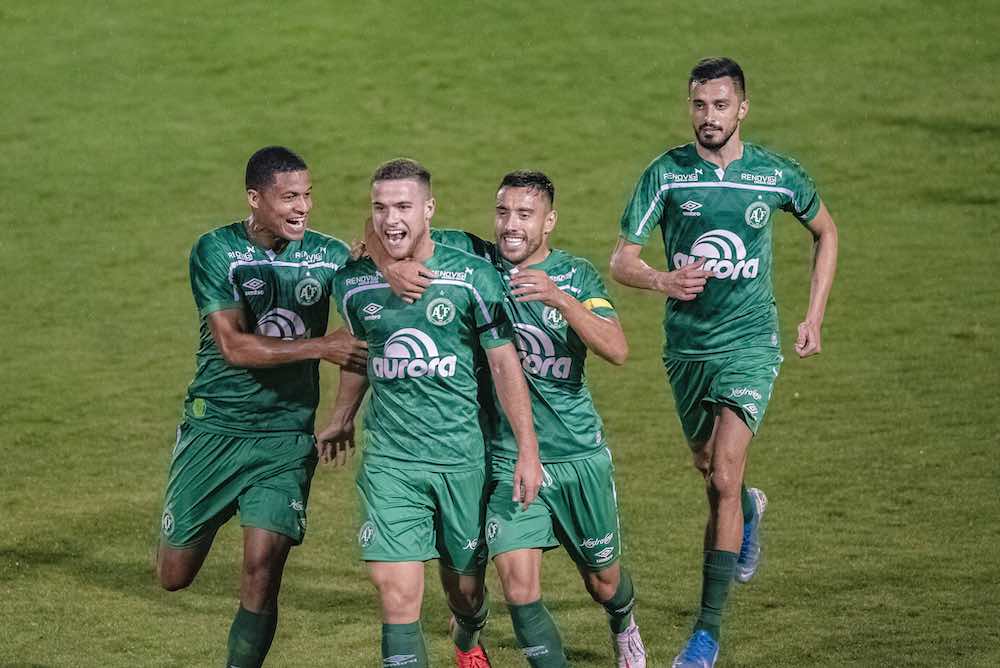 On 27 November 2019, Chapecoense suffered a 1-0 loss at home to Botafogo, bringing to an end their six-year stay in Brazil’s top flight. Heartbreak inevitably followed for Chape’s fans and players, but not for too long as passions were reinvigorated by their aim for 2020: to bounce back at the first time of asking.

Coach Umberto Louzer was hired in February of that year and given the task of returning Verdão to Serie A.

Owing to unforeseen events, a whirlwind of a season was to transpire in which the Brazilian football calendar had to be severely reorganised, leading to players receiving very little recuperation time between games. Yet Louzer and his green army were unfazed by anything that was thrown at them.

Indeed, in a dragged-out Campeonato Catarinense, Chape lifted the trophy with a 3-0 aggregate victory over Brusque in September. 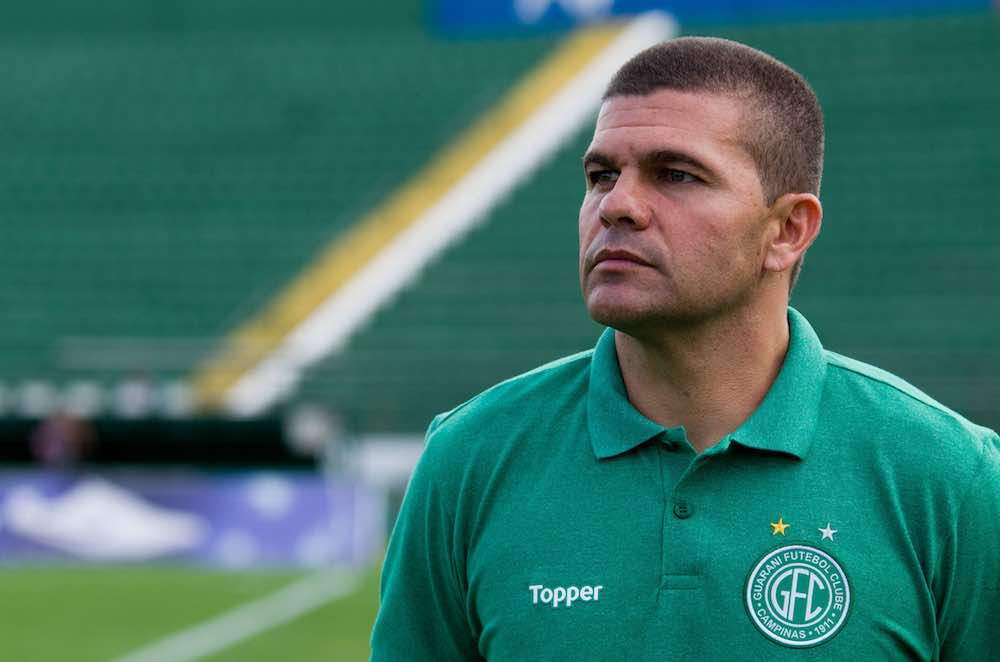 For context, the state championships are normally finished prior to the league’s kick-off, but the disruption caused by the Covid-19 outbreak meant that this time the two competitions overlapped. Thus, by the time of the regional triumph, Chape had made a great start in the league, winning five out of the seven matches played.

Subsequently, the form of the club from the small city of Chapecó continued in this vein as they then went 15 matches unbeaten before being brought back down to earth by back-to-back defeats against Cruzeiro and Guarani. These blips wouldn’t stop them, however, as they then went another eight games unbeaten, taking them closer and closer to their target of promotion.

After this run was ended by a 3-0 loss to Botafogo-SP, Chape had to remain calm. They needed just three points to return to the top flight.

In their next game against fellow state rivals Figueirense, they were leading 2-0 when their opponents were awarded a penalty. Diego Gonçalves scored from the spot to give the game a nervy finish but Chape hung on to attain their goal of promotion.

A few weeks later, the club would lift the title — their first-ever national league triumph.

“The sensation is the best possible! It’s a great feeling of happiness and mission accomplished,” goalkeeper João Ricardo tells WFi of the success.

“I think that Chapecoense and its supporters, for all they have been through, deserved to return to Serie A quickly. We managed to have a great campaign in the state championships, where we were champions, and we crowned the season with the Serie B title. Now is the time to enjoy and congratulate all those responsible.

“We trusted and believed in each other a lot, especially when we came back from the period without games. We talked a lot to keep believing and working hard to get closer and closer to that dream.

“I think that was one of the main points: we all got it in our heads that it would work, so everyone rowed together to achieve that goal. When everyone is focused on the same goal, things tend to work.

“We had a lot of key moments in the season. But I think one of the main ones was Umberto’s presence. The team was doing well, they were in good shape and the players believed in what he was doing. It was essential for us to remain firm.

“Of course, the victories were also very important, because they spread confidence and give some tranquillity to the side.” 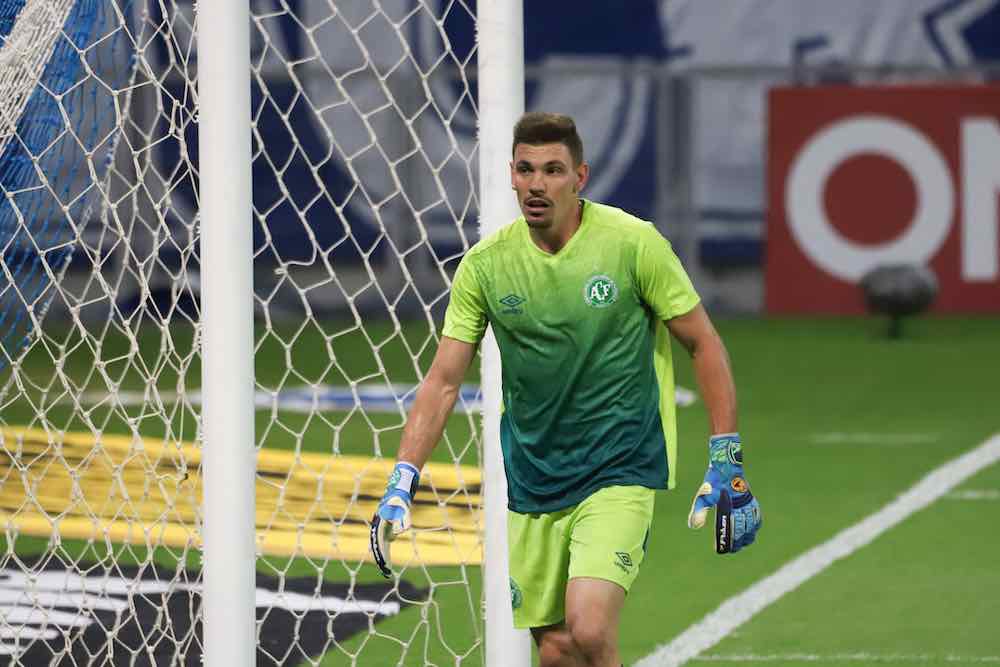 His teammate, central defender Joílson, was also clearly still basking in the club’s glory and reiterated the hard-work ethos within the group.

“I’m very happy to have won that league title with Chape, topping everything off in such a special way,” he said.

“Nobody expected us to get where we are. Thank god we won Chape’s first national title and were able to mark our name in the club’s history. It is something fantastic,” he said.

“I’m delighted to have contributed to this year. We went through difficult times, but we had character and put our heads in the right place. We knew where we could go and, with our feet on the ground and through much hard work, we achieved our goals and contributed to this great team.”

“Every player wants to play in big competitions and Serie A is one of them. We know how difficult it will be, but I’m sure Chape is prepared to make a great championship. God willing, we will achieve our goals in the Brasileirão.”

In 2017 Ricardo was part of América Mineiro’s promotion from Serie B, eventually going on to seal a first-place finish.

“It is true. In 2017 I was champion for the first time in Serie B with América Mineiro — also a very talented team in which everyone paddled together on the same side,” he said.

“I believe that in 2017 and 2020 they were two well organised and very strong teams — whatever was required on the field, they always had a lot of quality at their disposal.

“In the midst of all the difficulties that year, the strength and unity of the group meant that no matter who was chosen to play, they always did the job. So I believe there is similarity between 2017 and 2020 — no wonder that both sides ended up champions.”

On the final game of the most recent campaign, which concluded belatedly last month, Chape needed to better América Mineiro’s result to be crowned champions. The Mineiro side raced into a two-goal lead at home against Avaí, but failed to add to their tally, instead ultimately having to settle for a 2-1 win.

At the same time, Chape hosted Confiança, against whom they also took an early lead, before being pegged back on level terms early in the second half. Heading into the final ten minutes, it looked like América were going to lift the trophy; however, a goal from Pedro Henrique Perotti put Verdão just a goal away from swinging the pendulum back in their favour.

Then, deep into stoppage time, Bruno Silva was brought down. Chape were awarded a penalty. An entire season came down to one moment. One kick. Anselmo Ramon had the yearnings of Chapecó weighing on his shoulders. Luckily he was the calmest man in the stadium, and thus his bravery to do a Panenka from the spot paid dividends.

“At the time of the penalty, a lot went through my mind,” adds Ricardo.

“As we needed the victory and the goal, we needed to say prayers. I asked God to help us. And, thanks to Him, Anselmo scored the goal. It was agony and great pressure to an extent that is difficult to explain.

“In fact, I had no idea that he would chip the penalty. But it was something he had been practising for a few days, so I think it’s more than fair for him to do in games what he practises in training.

“Of course, to do this in an important and decisive game you have to have a lot of confidence. But Anselmo has always displayed that courage and ended up doing what he has been working on.”

Like his teammate, Joílson was also going through the motions at that moment: “My heart almost exploded at the time of the penalty. It was a moment of great emotion! Thank god Anselmo managed to score and we won the title.”

Despite winning the league title, there was one thing missing throughout the whole season.

“The crowd would normally push us further, but they have been absent as we are going through a delicate moment,” said the central defender.

“I hope that the vaccine comes soon and that we can return to the full spectacle of football. The whole Covid situation has been a bad and complicated time.

“It is bad not to feel the warmth of the crowd. But this season after the game we had contact with the people inside the cars, it was enough to feel some nostalgia. We know the importance and value that we must give to this crowd.”

The second division champions had the best defence in the league, conceding just 21 goals throughout the entire season. Joílson played 25 games in the campaign to become a key figure in the back line.

“Since his arrival Umberto has worked hard on the defensive system and, thank god, we have had a consistent championship,” added Joílson.

Parabens to Chapecoense who were promoted to the top division as champions 4 years after the devastating plane crash. One of only three surviving members of the original team captains the squad and will lift the trophy. 💚💚💚 https://t.co/EZXulh8bt2

Shot-stopper Ricardo played every single minute throughout the season, keeping a staggering 24 clean sheets, but all his praise went to his coaching staff and teammates.

“Everyone’s efforts were fundamental, not only in the defensive sector,” he said.

“I think a strong team that concedes few goals is a reflection of something that starts in the attack and comes back to help with the defending. The victories also give confidence to the players and it all helps the team.

“All were dedicated and gave the most of themselves on the field; Umberto played a very important role in this. I am also grateful for the commitment of the entire technical committee. They always gave us videos of opponents and performance analysis, for example.

“I also give thanks to our goalkeeping coaches, who prepare us to the maximum to concede as few goals as possible — and that’s what happened. This, in fact, was fundamental for the victories and, in the end, the title.

“Umberto, having been a player, knows football a lot. He’s a calm guy, always helping and guiding in the best possible way. I think he had a very strong role in our campaign.

“When he arrived, we were in a bad place, amid uncertainty and mistrust. But as soon as he arrived, he managed to take on that responsibility himself and the group became stronger.

“He started giving us a winning proposal and, thank god, it worked. The group bought his idea and the more experienced players were also able to help him use this methodology. When there is harmony between coaches and players, the end result is noticeable.

“We are happy due to all the work done by him and we can only thank him. We also thank all the people involved, from the committee, management and staff, who were always there and helped us win the title.”