Cuiabá Midfielder Auremir On The Club’s Journey To Uncharted Territory 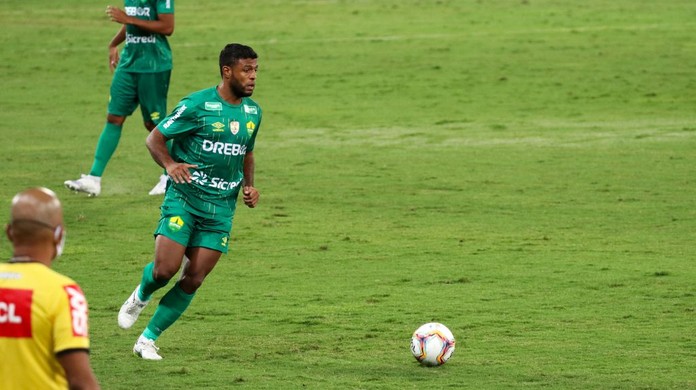 In the club’s early years, they operated as a training centre for youth players and only competed in Mato Grosso state amateur championships. Then, in 2003 when Cuiabá opted to turn professional, they made their debut in the Campeonato Mato-Grossense state championship — a tournament they immediately enjoyed success in by lifting the trophy in 2003 and 2004.

The glory days wouldn’t last long for the club nicknamed Dourado, and in 2006 after a poor display in the Mato-Grossense where they finished ninth, the club closed its footballing operations — mostly as a result of financial problems.

After two seasons in the wilderness, Cuiabá returned after striking a deal with the Dresch family and their company Grupo Dresch.

They were placed in the second division of the state championship where they immediately earned promotion back to the top tier of the local leagues thanks to a second-place finish.

Since their return to the first division of the Mato-Grossense, the club haven’t looked back at both state and national level.

Cuiabá won a staggering eight Mato-Grossense titles since 2011, and in 2015 lifted the Copa Verde — a competition contested between Brazilian clubs in the North and Central-West regions — following an emphatic comeback against Remo in the final, which also gave them a place in the 2016 Copa Sudamericana.

Two years later, Cuiabá earned promotion to Serie B as the club continued to make history.

Holding midfielder Auremir Evangelista dos Santos, commonly known as Auremir, made the move to Cuiabá in 2020, becoming an essential part of the team.

The boys from Mato Grosso had a blistering start to the 2020 campaign losing only two of their opening 15 matches.

“We had a great start because everyone at the club was ready and bought into the idea to make good things happen,” Auremir tells WFi.

“We knew we had a very difficult year ahead, but only with victories we could strengthen our confidence.”

Following a tricky November and December, Cuiabá maintained a positive mindset as they picked up their form once again to enjoy another strong end to the season.

With one game remaining, Dourado became the first side from Mato Grosso to be promoted to the top-flight of Brazilian football in 35 years.

“A feeling of happiness and satisfaction having been part of a historic moment in this club’s history — a young club, but one which has been very well organised to reach that goal,” Auremir said.

“We had a very close group; a good friendship and we bought into the idea of ​​fighting to put Cuiaba in Série A.

“Since the first game in Série B, we had this very clear objective in mind. In the end, the result was as we expected because we gave everything in order to achieve this goal. It was a wonderful and unforgettable experience!”

Auremir has previous experience of playing in the Brasileirão having done so 50 times across three different clubs.

The Recife native spoke about the difference between playing in Série A and Série B,

“The main difference between the divisions is the technique,” he said.

“Série A is a championship of a much higher technical level where even the smallest errors can be punished. I hope we can minimize mistakes to achieve our goals in the competition.”

When the Arena Pantanal was built, Cuiabá were in the third tier, making it a questionable choice for a 40,000+ seat stadium.

Now, just 6 years later, the club is in the top flight and (at some point?) will welcome Brazil’s biggest clubs to what should be a full stadium.

Cuiabá’s first game in Série A will see them host a familiar foe in Juventude — a team who also earned promotion last season.

The meeting between the two sides in Série B saw the side from Mato Grosso earn a decent point away from home, and win 1-0 in the return fixture at Arena Pantanal — something they will be hoping to repeat on Saturday.

“The expectation is good,” adds Auremir. “There are the usual nerves ahead of our debut in the league, but we are very focused on making a good start because that is very important in this competition.

“It is a dream come true for all those who have not yet had the chance to play in Série A.”

On April 1, Alberto Valentim was named as the club’s new manager and will lead them out in their debut top-flight season.

In his short spell in charge, he has already made a great impression among fans and players, having led the club to state championship glory.

“He’s a young coach, who studies a lot and who embraced the Cuiabá’s project,” adds Auremir of his new boss. “I hope that together we can have a great season and help Cuiabá.

“Personally, I hope to deliver on and off the pitch what I know I’m able to do and help Cuiabá achieve their targets.

“Our first goal is to get the necessary points to stay in Série A. After achieving this goal, we can dream of something more within the competition — and who knows, even in an international competition.”