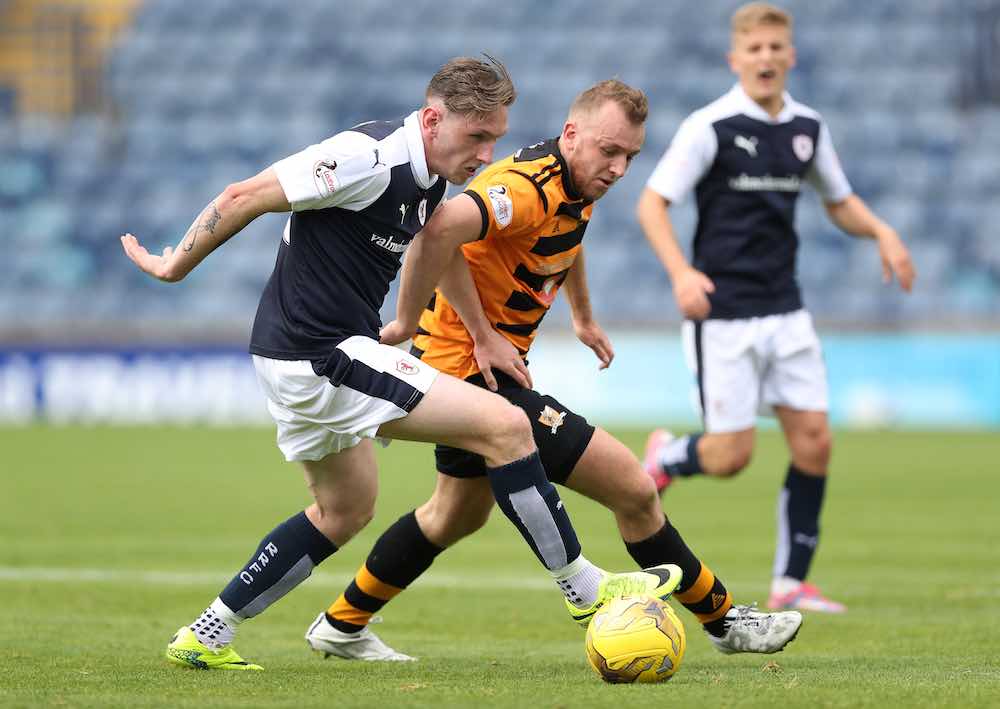 An interview with The New Saints’ Scottish forward Declan McManus, by Callum McFadden for WFi.

You joined TNS in the summer of 2021. How would you describe your experience of Welsh football so far?

“The move came out of the blue for me. I was under contract at Dunfermline and knew that any interested club would have to pay a fee for me.

“I knew that TNS were interested but I did not think that they would pay a fee. However, the club, to their credit, agreed a fee with Dunfermline very quickly and I travelled down to meet the club.

“European football was the big lure for me. I’ve always wanted to experience Europe and I like the idea of having a fresh challenge in my career as well.

“I want to win trophies and compete for league titles as that’s what you look back on in your career. TNS give me the platform to do that and testing myself in a new league has been an enjoyable experience so far.

“My ambition with the club is to qualify for the Europa League or Europa Conference League group stages. I want to win domestic trophies and beat my best ever goalscoring season, that I had at Falkirk.

“We played against Victoria Plzen this season and we took them all the way to penalties which shows that we can compete in Europe.

“I scored a hat-trick in that game and I want to be a part of TNS becoming the first domestic Welsh side to play European football at group stage level.”

You developed as a player through the Aberdeen academy. You also represented the first team during your time at the club. What was that experience like for you at a young age?

“I was at the club from the age of eight and progressed through the first team which was a massive part of my life.

“I learned a lot from my time at the club and my experience there helped me become the player that I am today.

“We had great coaches throughout the club. Of course, I wish I had more opportunities to play for the first team but that’s football.

“The experienced players at the club taught me a lot too. Gavin Rae and Russell Anderson were great with the young players as was Adam Rooney. Playing with him helped make me a better striker.

“Sone Aluko was great to train and play with too. He was such a talented player.”

You went on loan a few times during your time at Aberdeen. You won League One under Jim Duffy at Morton as well as winning player of the year within the league. What was it about Morton at the time and yourself that clicked?

“It was a huge season for me personally and for the club. It was the season that kickstarted my career in all honesty.

“I had been loaned to Alloa before Morton and it was not a fit for me or the club. Going to Morton had to work after that spell. I needed to show that I could compete in a league against men. There was a lot of pressure on me ahead of that loan move.

“I used that pressure as motivation and Jim Duffy was a great coach for me. He showed great faith in me and gave me the belief to go and score goals on a regular basis. It was a great season to be involved in with Morton.”

Your form led to a Scotland under 21 call up. How did that experience compare to playing League One football?

“Playing for Scotland at under 21 level was another massive experience for me. There are a lot of good footballers within the under 21 system in Scotland and across Europe.

“For example, we played against France and their team included Kingsley Conan, Aymeric Laporte and Adrian Rabiot among others. To test myself against those players was an incredible experience and one that I won’t forget.”

Your impressive form for Morton led to Fleetwood Town signing you. Was Fleetwood the right club but at the wrong time for you in your career?

“I think that is fair. The club was great and the set up was very professional.

“It started well for me at Fleetwood with a debut goal. I wanted to join the club as they saw me as a first-team player and I was attracted by playing in England.

“Unfortunately, Graham Alexander was sacked early on in my spell there and he was the manager that signed me. After he left, regular opportunities were hard to come by.

“Despite that, I don’t regret moving there as I wanted to play in England and it’s something that I have been able to do.

“Better players than myself have struggled at clubs for various reasons so I don’t beat myself up about my time there. I know that I gave it my all.”

You returned to Scottish football with a few loan moves before joining Ross County permanently in 2018 following your first spell at Dunfermline. You played in Ross County’s Championship and Challenge Cup winning double team. Was that season one of the best of your career?

“It was a very good season for myself and the club. I played 42 games and played a big part for the team, even though I played out of position in the wide areas.

“I only scored four goals in that season but I was tasked to play in a different way and create more for others.

“I had great memories from my time at County and I’m proud of my time there.”

You joined Falkirk on loan from County in 2019 and had the best goal scoring year of your career to date with the Bairns. You scored in many games. Was your confidence a big factor in your goal output in that season?

“I knew that I wanted to play up front regularly again and I knew that my best chance of doing that was to move on loan, having spoken to Steven Ferguson and Stuart Kettle who were co-managers at County.

“I was not fazed by giving up an opportunity to play in the Scottish Premiership by swapping it for League One at Falkirk.

“The minute I arrived at Falkirk, I could sense how big a club it is. The expectations were big at the club and I believe that I was able to meet those expectations with my personal level of performance.

“I’ve kicked on since that season at Falkirk and to be honest, if Falkirk had been promoted in that season then I’d probably have stayed at the club.

“I seriously considered staying at the club even in League One but an opportunity to return to the Championship with Dunfermline for a second spell was too good to turn down.”

Based on your experiences to date, who would you pinpoint as the best players that you’ve played with and against?

“In terms of teammates at club level, I’d pick Ryan Jack. Aberdeen had many top players but Ryan Jack was a superb footballer. It is no surprise that he has went on to win a league title with Rangers.

“I’ve also played with John McGinn, Ryan Fraser and others who are now in the Scottish national team on a regular basis.  McGinn would be the best player that I’ve played with based on where he is now.

“Laporte and Lenglet were the toughest defensive partnership that I ever came up against. Within the Scottish game, Darren McGregor stands out as being a very good defender who was physical and never gave you a moments peace when you against him.”

Loading...
Newer Post
Atletico vs Liverpool Serves Up A Spectacle Thanks To Simeone & Klopp
Older Post
Is Mohamed Salah Playing As Well As Anybody In Europe Right Now?