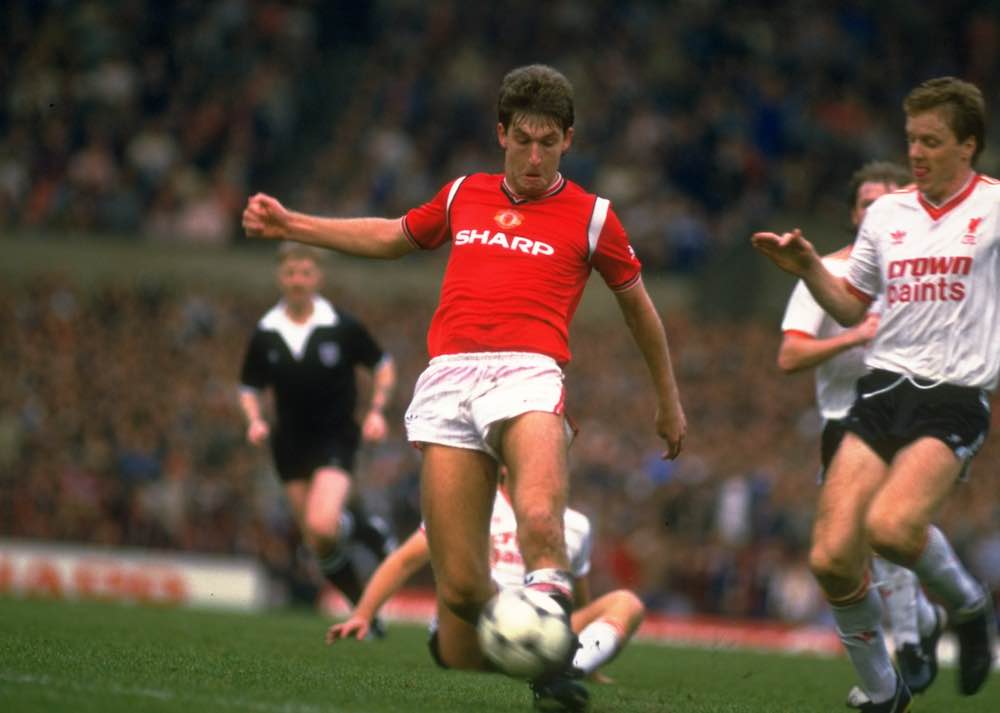 “It all happened very quickly for me. I went to a Home International open day at Old Trafford at the age of 15.

“Northern Ireland were a player short on the day and Sammy McIlroy said to the organisers that Whiteside is in the stand and would be able to play.

“Then, before I knew it, someone came up to the stand to get me and take me down to the dressing rooms to play for Northern Ireland in the tournament.

“Incredibly, we went on to win the tournament and I performed very well. I had a skinhead at the time and no one knew who I was but that was the start of my journey with the club as I was signed there and then.

“I didn’t train with the first team a lot after being signed in all honesty. So, it was a shock for me when I got called up to the first team.

“Big Ron [Atkinson] asked me if I had a suit and when I replied yes, he told me to go and get it as I would be travelling with the first-team squad to Brighton.

“This was when teams could only use one substitute so I didn’t expect to get on and that was the first that I had heard of any first-team opportunities at the club.

“I went down to Brighton and was named as a substitute as expected. I did not expect to come on but Mike Duxbury pulled up injured and on I went to make my debut two weeks before my seventeenth birthday. I played twelve minutes in the game but it felt great to get on at all.

“The lasting memory that I have from that time was that I was earning £16 per week. On the night, we won the game with a goal from Ray Wilkins and the senior players started winding me up on the bus about what I would do with my win bonus.

“I went from earning £16 per week and travel expenses to earning £800 for twelve minutes work! It still makes me laugh to this day. That was the start of my career.

“I kept my place in the team for the next two weeks and we won both of those games as well. That meant that I had earned £3,200 in win bonuses in my first three weeks in professional football.

“All of the senior players at the club looked after me well. Sammy McIlroy was especially good with me and I think that was because we were both from Northern Ireland. If I needed anything then he would always help me.

“For example, as many teenagers do, I had a bit of a rash on my face and Sammy went and got me face cream from the chemist that would best help it. He even gave me his Northern Ireland jersey as a gift which meant a lot.

“In the dressing room, I couldn’t have sat between two more different people. On my left was Martin Buchan and on the right was Lou Macari. That was some introduction to the first-team dressing room and both looked after me.”

You won two FA Cups while at Manchester United and scored in both cup final successes. What were those occasions at Wembley like to play in and how proud are you of scoring in those games?

“I was lucky to be able to have success at Wembley. I scored in two semi-finals and in three cup finals there. I scored with my right foot, left foot and with a header in those cup finals. A perfect hattrick.

“When you are eighteen, you take cup finals in your stride as you think that you’ll be playing in them every single year.

“In the first FA Cup final against Brighton, we should have lost in all honesty. We won the replay easily [4-0] and I scored the second goal in the game. That goal still stands as making me the youngest goalscorer in FA Cup final history.

“You play football to win things and, thankfully, I was able to win the FA Cup again two seasons later.”

You played alongside many top players including Bryan Robson while at United. What was Bryan like to play alongside because as a captain he led by example?

“Bryan was the best player in the country. He stood out for Manchester United and for England. We used to have a good rapport when I moved into midfield.

“He was the all-round midfield player. He could tackle, he could head the ball, he could pass, he could score and he could move from box to box with ease. He could do it all. You don’t get players like him anymore.

“He was the greatest player of that generation at United and captained the side for thirteen years. Roy Keane then followed Robbo a few years later and he was very similar for twelve seasons.

“Manchester United are very privileged to have had two of the best midfielders of their generation for 25 years.

“I always enjoyed playing alongside Robbo. If anyone left a bad tackle on me then he’d swap position with me and get them back twice as hard. As he was the England captain, he got away with murder!”

The fans at Old Trafford still sing your name to this day. What are your personal highlights from your time at Old Trafford and what does the club mean to you even today?

“I love the club. I’ve worked at the club in a hospitality capacity for 27 years in addition to my eleven years as a player. I’ve had 38 years of association with the club and I still love going to Old Trafford each week.

“I loved my time at the club from day one and it meant a lot to my family as they were Manchester United fans.

“I was not a Manchester United fan as a kid. I did not support any particular team but I knew that I wanted to be a professional footballer more than anything else.

“I used to fly over and play for the junior side on a Saturday afternoon, watch the first team then fly home. That was my routine for six months before I then signed permanently for the club at sixteen.

“It was a big move to leave home for Manchester, but you are joining one of the biggest and best clubs in the world which makes it all worth it.

“The club have me a guarantee at the age of fifteen of a one-year apprentice contract followed by a three-year professional contract so they looked after me and helped me settle into life in Manchester.”

Last but not least, you represented Northern Ireland on 38 occasions, scoring nine goals as well as winning the Home Championship in 1984. You were also the youngest player since Pele to play at a World Cup. How would you sum up your international career?

“It started off incredibly well by becoming the youngest player to ever play at the World Cup in Spain ‘82. I was seventeen years and forty-one days old.

“It was unbelievable for me from a publicity perspective. The scenes at the hotel for me were similar to the scenes years later when David Beckham signed for LA Galaxy. I was mobbed at the hotel.

“Pele even sent me a video to wish me well. In the video, he said: ‘I hope you are as successful as me at World Cups.’

“That made me laugh as I thought, I’m sure I’ll have a chance of winning three World Cups. Thank you very much for that, Pele!

“It was lovely to receive the message and the record still exists to this day. If no one breaks the record at the next World Cup in Qatar then I’ll have been the youngest player for half of the World Cups in history. That would be a nice box to tick.

“I’m very proud of that and of every opportunity that I had to play for the national team. It ended early for me due to injury which meant I couldn’t add to my 38 caps, but I played in two World Cups and played against Brazil before things slowed down for me in my mid-twenties.”