Kevan Brown: From Southampton To Woking Via Brighton And Aldershot 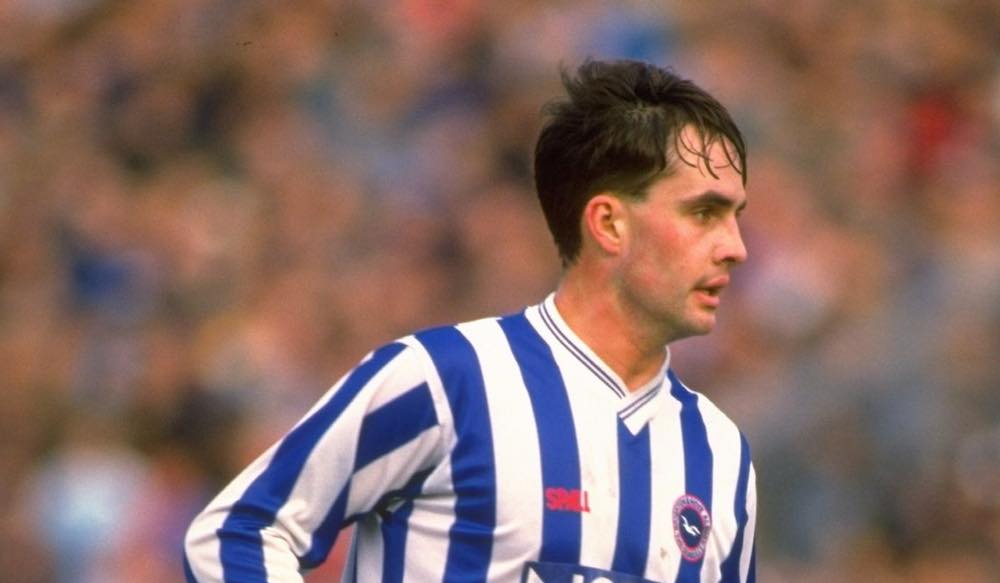 An interview with former Brighton, Woking, and Aldershot full-back Kevan Brown by Callum McFadden for WFi.

You started your career as a trainee at Southampton. What are your memories of the club?

“I signed for the club at the age of 13 and I spent a lot of time in the development side.

“They wanted to keep me as an apprentice, but I wanted to stay on at school, so I went to college for a year to finish my studies.

“I did that then joined the club as a full-time apprentice.”

Who were the big characters when you were coming through your apprenticeship?

“We had Matt Le Tissier and Alan Shearer coming through in the year below me. Chris Wilder was at the club at the time too. Another high-profile apprentice was Dennis Wise.

“Then in the first team, you had Mark Wright and Tim Flowers who were signed from Wolves and Oxford Utd respectively as young players and were nurtured at the flub but didn’t go through the schoolboy/apprenticeship system at Saints.

“The club had a very talented squad and I played over 100 reserve team games, but I was unable to force my way into the first team in a competitive game.

“I played in numerous friendlies and end of season games but never for the first team. I was very close under Lawrie McMenemy to breaking in.

“The closest I came to playing a league game for the Saints was when I travelled with the first team to Watford and was due to play if David Armstrong didn’t pass a fitness test. Sadly for me he passed the test so I watched the game from the stands.

“Unfortunately, it just didn’t happen in the end because we only had one sub unfortunately which made it hard to break in.

“Overall, I loved my time at the club because my love of football was due to my dad Peter Brown who played for the Saints in the 50’s later to player for Wrexham.

“He took me to watch the Saints and we were at Wembley when Saints won the FA Cup in 76. I was 10 years old and only a few years later I was training with the likes of Nick Holmes who I had supported as a boy.”

From Southampton to Brighton. You join the club on an initial loan before making the move permanent. how do you reflect on your time at Brighton?

“It was great to play first-team football each week and playing in what would now be called the championship was a good learning curve.

“I played on loan initially although the side were relegated which was frustrating. However, I joined permanently and helped the club earn promotion in the following year.

“It’s a great club and I really enjoyed every minute of my time there.

“The promotion season was such a memorable year for us, and I played alongside Doug Rougvie who joined the club from Chelsea. He was a great character, and I learned a lot from him. We also had players such as Dean Wilkins, Alan Curbishley and Kevin Bremner who were very talented too.

“Barry Lloyd wanted to okay attractive football which we did but we could also mix it up and be physical too. He signed players capable of playing at a higher level and as such, he created a perfect mix.

“The only downside for me was at the end of the promotion-winning season. I played every league game; I think something like 36 and then picked up an injury just before the end of the transfer window.

“That’s when Gary Chivers was signed and despite starting in the side at the start of the following season my first-team opportunities became limited. This led to me being out of the team and being desperate to play football it led to me leaving for Aldershot.”

You make the move to Aldershot. What are your memories of your time at the club?

“We had a lot of good characters in the squad in a time of adversity really. We weren’t always being paid and there were issues around the stadium at the time due to a dispute between the club and the council. It was an up and down time really.

“Brian Talbot came in and the training was fantastic. We started that year very well, but he stated that if the wages weren’t paid that he would leave the club and he left in December of that season.

“Up until March we weren’t paid, and the club was sadly wound up. We tried to stay around and save the club, but it went to the wall sadly.”

Following a tough time at Aldershot, success with Woking followed. You led the cup to three FA Trophy successes at Wembley as captain. How do you reflect on your success at the club?

“I had many options to stay within the football league from clubs such as Torquay, Stockport and Hereford. However, once I had spoken to Woking it was clear that the club were ambitious, and it allowed me to start a new career in teaching in addition to playing football.

“We had a good squad and looked to play football the right way. We surprised a lot of sides in the FA Cup with our style and I had a great rapport with the fans. At times, we were selling out the ground with 6,000 fans behind us.

“We had players like Scot Steele and Clive Walker who could turn a game in any instant and by allowing me to start a new career in addition to my football, it was the best move I ever made.”

Your testimonial match was against West Ham United. How special was it to be respected with a testimonial to mark your service at the club?

“It was fantastic. I owe John McGovern a lot for that as he spoke to Harry Redknapp and helped arrange it for me. It coincided with the Premier League starting a week later than usual so for them, it was great to have a friendly and as such they brought a very strong team.

“The likes of Ian Wright, Frank Lampard and Rio Ferdinand played in my testimonial which was great especially when I look back now. It was a lovely send-off.

“I loved my time at Woking and to play at Wembley was so special and to do it three times (winning & captain) was incredible and something that I will always be very proud.”

Who would you say are the best players you played with were?

“It’s a very tough question but I have to mention Steve Williams. He was superb on the ball and played with Arsenal and England.

“At Woking, there were many players who I felt should have played in the football league such as Mark Biggins and Tim Buzaglo. Clive Walker and Andy Ellis were superb footballers too.”

In terms of opponents, who were your toughest opponents?

“We played Arsenal when I was at Brighton, and they had a wonderful side and so many top players. At non-league level, David Leeworthy was a very good player. He was a top goal scorer and a handful to play against in each game.

“Ian Wright was one of my toughest opponents when he was at Crystal Palace. We played them when I was at Aldershot, and he was scarily good.”

Finally, which coaches helped you on your way in your career as a footballer?

“One coach always stands out for me and that is Ian Branfoot. He wasn’t popular at Southampton, but he was very helpful for me.

“He had time for me to give advice and guidance when I was at Southampton. Similarly, I must mention Colin Lippiatt the former Woking coach who took me to Yeovil and then back to Woking for my last spell there.

“Barry Lloyd is another I must mention as well as Martin Hinshelwood. Geoff Chapel must be mentioned too because he was always able to mould talented sides and get the very best out of them. He always made sure we enjoyed our football and played in the right way.”

Loading...
Newer Post
Norman Whiteside On His Man United Career & Being A World Cup Record Breaker
Older Post
Scott Cuthbert On His Time In The English Leagues And Learning From Tommy Burns