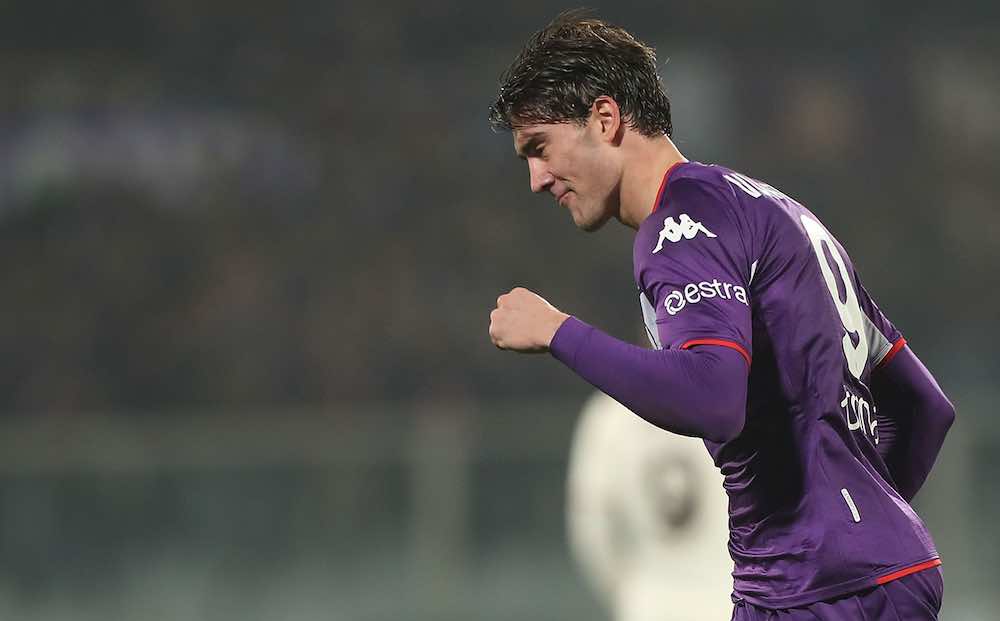 Manchester City are weighing up a move for Fiorentina striker Dusan Vlahovic this summer, according to Corriere dello Sport.

Pep Guardiola has been searching for a number nine since the summer departure of Sergio Agüero, but replacing the legendary Argentinian striker is not straightforward. That’s why the club are taking their time, but they’ve identified 21-year-old Vlahovic as a primary target.

He began his career with Partizan in his home country of Serbia but penned a deal with Fiorentina as an 18-year-old in 2017.

Last season, he hit 21 Serie A goals in just 37 outings, and this season he already has 13 in 16. He’s appeared 14 times for his country, despite his tender age, and recently hit a brace as they defeated Azerbaijan 3-1 in the World Cup qualifiers.

In the 2020/21 season, he won the award for the Best Young Player in Serie A and he’s swiftly becoming one of the most sought-after strikers in Europe.

Man City are not alone in their pursuit of the forward; Spurs have also been credited with an interest, as reported by Football London. That is somewhat ironic, as their reluctance to part with Harry Kane has prompted Pep Guardiola to look elsewhere for his strike talent.

Spurs may rue that decision given Kane’s recent form and the obvious draw of Lancashire over North London. Guardiola’s side are in the title hunt, unlike Spurs, and they’re outright favourites to win the Champions League according to the latest betting odds with Coral. On the other hand, Spurs are struggling in the Europa Conference and are not likely to be in Champions League contention next season, either.

The price for the striker is likely to top £55m but that certainly won’t put off England’s top clubs. Fiorentina are thought to be unwilling to part with their prized asset until the summer when transfer fees tend to head upwards, whilst they’re also hoping for European qualification of their own.

La Viola are sixth in the Italian top flight, level on points with Juventus and seven behind Atalanta in the final Champions League qualification spot. They haven’t played in European competition since 2016/17, when they went out in the Europa League round of 32, losing 4-3 to Borussia Mönchengladbach across two legs.

Vlahovic is seemingly eager on the move; his five-year deal with the club expires in the summer, and he’s thought to be unwilling to negotiate a new deal in Florence, with top clubs circling.

Becoming the successor to Agüero would be tempting — the Argentine was a catalyst for many of the title successes achieved by Man City over the years, and the lure of winning big trophies often draws players in.

It remains to be seen if Pep does see his pursuit of the 21-year-old through, but early signs are he could be the next big name to emerge in European football, and talent like that needs the right platform upon which to perform.