What Does The Future Hold For In-Form Brenner At FC Cincinnati? 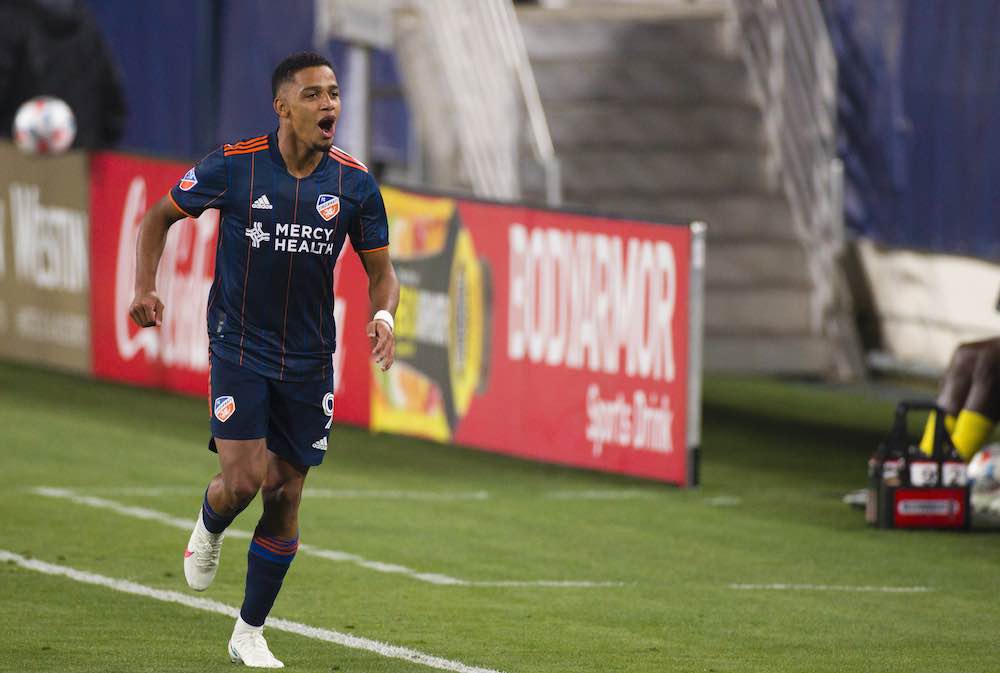 Since he scored three goals during a session of midweek madness against New York City FC, Brenner’s name has regularly been in the headlines for FC Cincinnati.

In that hat-trick game, which finished 4-4, the Brazilian also had a goal ruled out in the first half and had the ball in the net for a fifth time late in the game, though was correctly ruled offside.

Brenner had taken his role alongside Brandon Vazquez in the attack after scoring the only goal in their 1-0 win over Orlando City in the game before that.

Since then he scored a goal in an impressive performance in the 2-2 draw at New England Revolution and added two assists in a 2-2 draw with Vancouver Whitecaps.

Brenner has in some ways been a controversial figure, not living up to the price tag of around $13m. He has scored 13 goals in 48 games for the club since signing. Five of those have come in his most recent five games this season.

Brandon Vazquez and Dominique Badji kicked off the season in fine form creating a good partnership with has seen Vazquez score eight times in MLS this season.

Badji is a hard-working forward whose selflessness provides others with opportunities as well as makes life difficult for opposing defenders. Brenner was unable to participate in a lot of pre-season due to visa issues which gave the pair a chance to build their relationship, keeping the Brazilian on the bench for a lot of the first half of the season.

Brenner is a finisher. A dangerous player in the opposition penalty box, though his work off the ball isn’t a particular strength.

The first goal which was ruled out against NYCFC was a clever backheel on the edge of the six-yard box. His hattrick included a well-timed run behind the defence to finish left-footed, a bicycle kick with his right foot as well as a left-footed strike from outside the box. The second goal which was ruled out was from a close-range tap-in reacting quickest, though was offside.

He showed his range of finishing and quickness which means he can find space to get a shot away. Despite boasting a decent rate of hitting the target with his shots, prior to the goal against Orlando City Brenner had only scored once in 19 appearances. This does include substitute appearances, though, and he failed to have a shot in only three of those games.

Interest in the 22-year-old is still high, and Internacional even approached FC Cincinnati who rejected a transfer bid before the start of the season.

But considering this return to form over the past week, is Brenner finding his way back into the side or raising interest for a potential move?

Brenner arrived in Cincinnati for the 2021 season, and it was the third time in as many years the club finished bottom of MLS. They had been the worst side in the league every year of their arrival into MLS.

This season, Pat Noonan has taken the role of head coach and his side have already won more games in a single season than they have before and it’s only June.

Only two sides in the Eastern Conference have scored more than FC Cincinnati this season — CF Montréal and NYCFC. Goals are not an issue at present, with Vazquez and Lucho Acosta especially being big parts of the attack.

The issue for Noonan’s side once again is in defence. Alec Kann was brought in from Atlanta United in goal as well as Roman Celentano from the SuperDraft and the young goalkeeper has taken the starting spot recently, saving a penalty in the NYCFC game last time out.

They seem confident in the future with their goalkeepers, but their defence needs work. Matt Miazga has been a name linked with the club and the 26-year-old American could provide higher quality than is currently on the roster. Signed by Chelsea in 2016, Miazga made just two appearances for the blues and has played for a number of sides on loan, most recently Alavés in Spain’s La Liga.

An approach for Miazga though could be expensive, and with all three Designated Player spots taken up, this could be where the decision to sell Brenner comes in.

Acosta has been one of the most impressive attacking midfielders in MLS this season. The Argentine is their captain and has six goals and five assists in MLS so far. The other DP is Obinna Nwobobo who arrived from Göztepe in Turkey in April for a little under $3m. He has been a workhorse in the centre of midfield and made that area of the pitch much stronger in Noonan’s system.

This leaves Brenner as being the one who would make the most sense to move on the free up a DP spot.

With interest still out there, they could recoup a decent amount of the fee paid, though it is highly doubtful they would get too close to the amount they paid.

Brenner himself was reportedly unhappy at the start of the season and was rumoured to be keen on securing a move away. By finding form he could be enticing sides like Internacional to revitalise their interest.

Should he be keen to stay, and Noonan and his staff decide that Brenner has a future at the club, they will be an entertaining side who are looking to reach the playoffs now this season. Goals will come at both ends of the field.

Noonan needs to decide to either bring in a new defender not on a DP contract or let Brenner go and spend on securing his defensive line. If they can sign a player like Miazga without having to offer a DP contract, they get the best of both worlds, though this is clearly easier said than done.